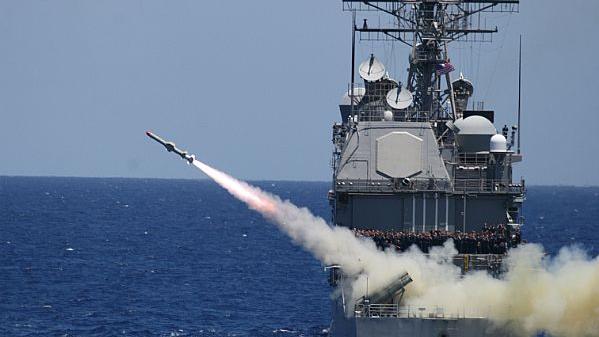 The A/U/RGM-84 Harpoon is an all-weather, over-the-horizon, anti-ship missile system that provides the Navy with a common missile for air and ship launches. The weapon system uses mid-course guidance with a radar seeker to attack surface ships. Its active radar guidance, low-level, sea-skimming cruise trajectory, terminal mode sea-skim or pop-up maneuvers and warhead design, assure high survivability and effectiveness. Harpoon is capable of being launched from surface ships, submarines, shore batteries or aircraft.  Ship-, submarine- and shore-launched Harpoons require a booster for launch. Air-launched Harpoons are fired without the need of a booster and generally start the engine after aircraft separation.  Originally developed for the Navy to serve as its basic anti-ship missile for fleet-wide use, the A/R/UGM-84 was first introduced in 1977. In 1979 the air-launched version was deployed on the Navy’s P-3C Orion aircraft. The Harpoon was also adapted for use on Air Force B-52H bombers, which can carry from 8 to 12 of the missiles. In 1998, an advanced upgrade to Harpoon missile was developed. This Harpoon Block II missile incorporates GPS-assisted inertial navigation, which enables the system to have both an anti-ship and a land attack capability. The Block II version was not adopted by the U.S. Navy, but has been integrated on foreign F-16 aircraft and is presently being integrated on foreign F-15 aircraft. Twenty-nine foreign military partners employ the Harpoon Block II missile and its launch control equipment.

The updated Harpoon Block II+ provides a rapid-capability enhancement for the Navy that includes a new GPS guidance kit, reliability and survivability of the weapon, a new data link interface that enables in-flight updates, improved target selectivity, an abort option and enhanced resistance to electronic countermeasures.