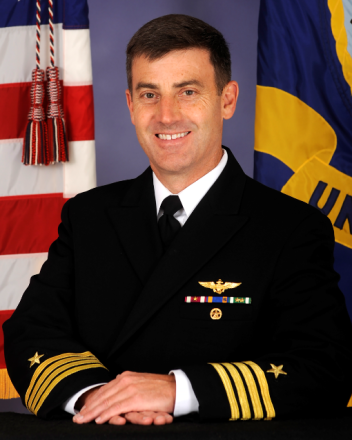 Captain Michael Burks graduated from the United States Naval Academy in 1998 with a BS in Aerospace Engineering and earned his wings in February 2000.

In 2004 Captain Burks attended USN Test Pilot School, Class 127. After graduation, he reported to VX-23 and led multiple developmental test projects on F/A-18 A-G and T-45 A/C. During this tour he earned a MS in Systems Engineering from Johns Hopkins University. In 2008 he attended the U.S. Army Command and General Staff College in Fort Leavenworth, KS.

In 2011 he was assigned as Operations Officer for the F-35 Integrated Test Force, responsible for nine unique F-35 B/C developmental test aircraft and a diverse test team of over 900 personnel. During this tour he flew more than 200 hours of developmental flight test on F-35 B/C.

Captain Burks reported as Executive Officer of VFA-86 “Sidewinders” in January 2015 and became Commanding Officer in May 2016. He led the Sidewinders on a seven-month deployment on USS DWIGHT D EISENHOWER (CVN-69) in support of Operation INHERENT RESOLVE, earning the 2016 Pacific Fleet Battle “E” and RADM C. Wade McClusky awards for operational excellence.

After command, Captain Burks was selected to transition to the acquisition career field and reported to PMA-265, serving as F/A-18 E/F Deputy Program Manager, leading the stand-up of the Naval Sustainment System and super hornet readiness recovery. In Aug 2020 he was reassigned to help standup PMA-230, Next Generation Air Dominance program office. In Aug 2021, he was selected an served a one year assignment as Executive Assistant for the Principal Military Deputy, Assistant Secretary of the Navy (Research, Development & Acquisition).