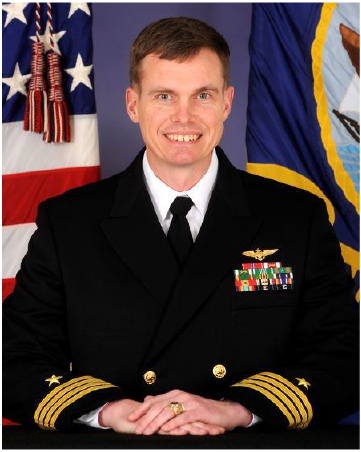 A native of Milroy, Pennsylvania, Capt. Michael Kline graduated from the U.S. Naval Academy in 1997 with a Bachelor of Science in Aerospace Engineering. After receiving his wings in November 1999, he reported to Fleet Air Reconnaissance Squadron (VQ) 7 where he completed flight training in the E-6B Mercury.

From 2000 to 2004 he flew with the “Shadows” of Fleet Air Reconnaissance Squadron (VQ) 4 based out of Tinker Air Force Base, Oklahoma where he served as an E-6B Mission Commander Evaluator and Assistant Naval Air Training and Operating Procedures Standardization (NATOPS) Instructor Pilot.

Kline was selected to the Air Force Institute of Technology – U.S. Naval Test Pilot School Cooperative Program earning a Master of Science in Aeronautical Engineering and graduating with Class 131 in June 2007. He then served as Experimental Test Pilot, Air Test and Evaluation Squadron (VX) 20, responsible for multiple developmental test efforts for the E-6B. During this time, he volunteered as an Individual Augmentee in support of Operation Iraqi Freedom. Kline served as Brigade Electronic Warfare Officer for the 55th and 304th Sustainment Brigades at Joint Base Balad, Iraq.

In August 2009, he again reported to the “Roughnecks” of VQ-7 at Tinker AFB for his department head tour, where he served as NATOPS Officer, Operations Officer and E-6B NATOPS Instructor Pilot. Kline was selected for Aerospace Engineering Duty Officer (AEDO) and Acquisition Corps during this time.

From May 2016 to February 2018, he was the AEDO Detailer at Navy Personnel Command, Millington, Tennessee, where he was responsible for balancing the career progression goals of over 320 constituents and was the sole acquisition expert for PERS-43. Following this tour, Kline served as the MQ-25 Deputy Program Manager for
the Unmanned Carrier Aviation Program Office (PMA-268) from February 2018 to January 2021. He most recently served as Executive Assistant to Commander, Naval Air Systems Command.