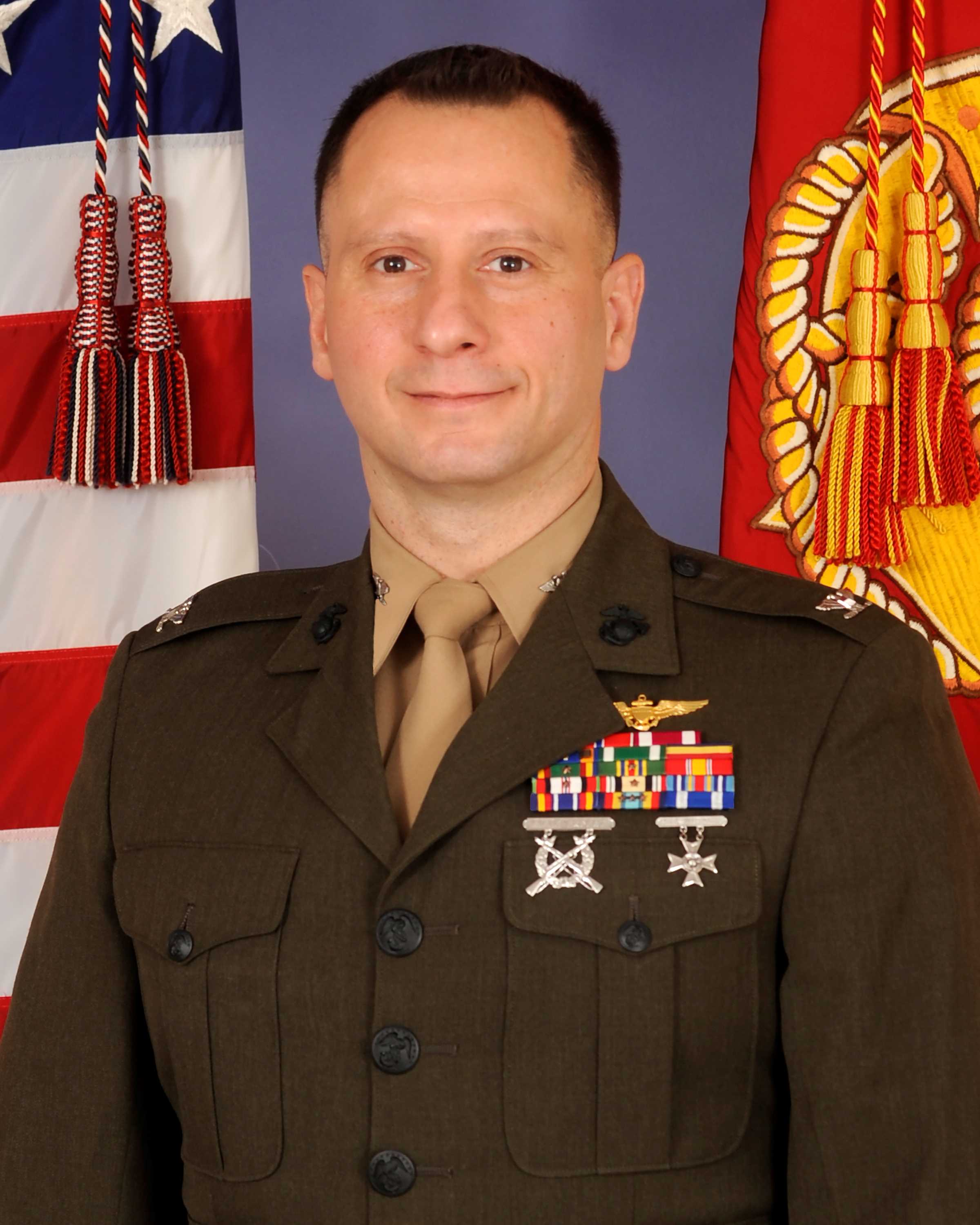 Originally from Philadelphia, Pennsylvania, Col. Vasilios E. Pappas graduated from Drexel University in June 1997 with a B.S. in Chemical Engineering and was commissioned a Second Lieutenant in the United States Marine Corps. Pappas completed the Basic Officer Course in June 1998 and reported for flight training at Pensacola, Florida.

In June 2000, Pappas was designated an unrestricted Naval Aviator as a UH-1N “Huey” Utility Helicopter pilot and assigned to Marine Light Attack Helicopter Training Squadron (HMLAT) 303 in July 2000. Following fleet readiness squadron (FRS) training, Pappas was assigned to Marine Light Attack Helicopter Squadron (HMLA) 169 and deployed to Okinawa, Japan from January to July 2001. He subsequently deployed with HMLA-169 to Ali A Salem, Kuwait in support of OPERATION ENDURING FREEDOM (OEF) from January to March 2003. In March 2003, after the onset of the conflict in Iraq, Pappas served in support of OPERATION IRAQI FREEDOM (OIF) supporting the 1st Marine Division from March to October 2003. Pappas was designated a Weapons and Tactics Instructor (WTI) in April 2004, and in June 2004, he deployed to Okinawa, Japan to join HMM-265 (REIN) on the 31st Marine Expeditionary Unit (MEU). The 31st MEU was deployed to Iraq in support of OIF from September 2004 to March 2005.

Pappas was selected to the United States Naval Test Pilot School and graduated with Class 129. Pappas reported to Air Test and Evaluation Squadron (HX) 21 in June 2006 and assigned as the UH-1N Platform Coordinator and Engineering Test Pilot with the H-1 Test Team. In June 2008, Pappas graduated from Johns Hopkins University, Maryland with a M.S. in Technical Management.

In April 2010, Pappas was selected to join the H-1 Upgrades Tactical Training Unit (TTU) at Marine Aircraft Group (MAG) 39. Upon the realignment of MAG-39 H-1 Upgrades TTU in April 2011, Pappas was reassigned to HMLA-469 serving as the Department of Safety and Standardization Officer until October 2011 and then the Operations Officer until April 2012. Assuming the duties of Executive Officer of HMLA-469, Pappas deployed to Afghanistan from April – October 2012 in support of OEF 12.1-12.2.

In May 2020, Pappas reported to the Pentagon as the Military Assistant to the Assistant Secretary of the Navy (Research, Development and Acquisition).

Pappas assumed the duties of Program Manager for PMA-276 in March 2021.

Pappas has accumulated over 3,100 flight hours in 23 different rotary and fixed wing series aircraft. His personal decorations include the Bronze Star, Air Medal with Combat “V” and Strike/Flight numeral 19 and the Navy and Marine Corps Commendation Medal.