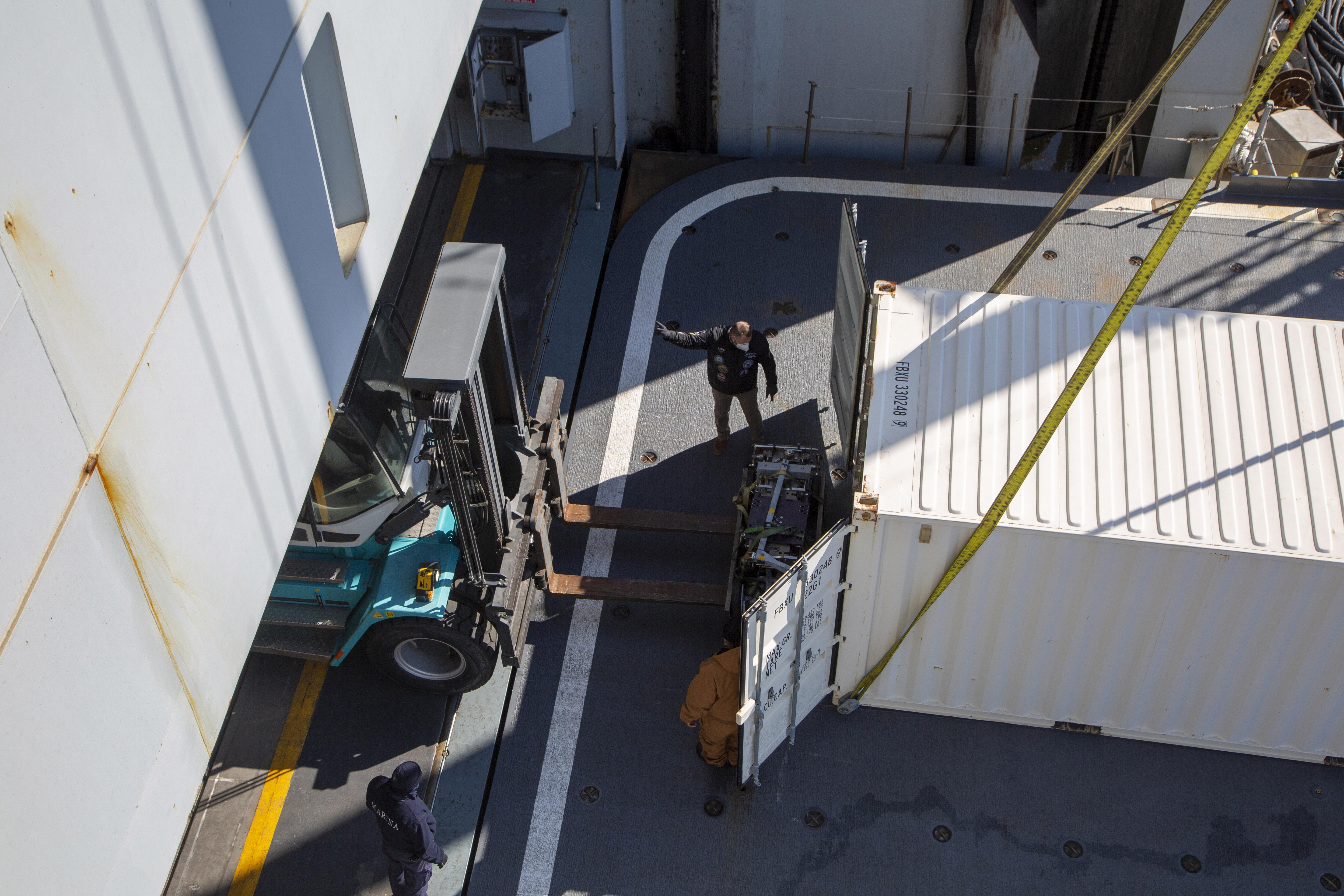 The Italian navy flagship arrived here Feb. 13, 2021 as part of the Italian navy’s Ready for Operations (RFO) campaign to certify the recently upgraded ship’s compatibility with F-35 Lighting II aircraft and prepare to operate the 5th generation fighter as its key weapons system.

Before the arrival of the specially instrumented U.S. test jets that will be used to develop and expand a flight envelope, the special tools, parts (those required plus those possibly needed), and support equipment must be aboard and in its place. This undertaking is all in a (couple of) days’ work for F-35 Patuxent River Integrated Test Force (PAX ITF) logistics lead and his team, as well as the many who support the mission.

That effort comprises ensuring that “part of PAX” gets aboard the ship before two F-35B short takeoff and vertical landing (STOVL) test jets ferry from the southern Maryland naval air station to the aircraft carrier after it sets sail, said the PAX ITF logistics team supervisor.

“I love the challenge,” said F-35 PAX ITF logistics supervisor Pat DeLeon, in between a worker asking how to get a pair of leather gloves and another querying where to find the wire cutters. A day earlier he was driving a forklift on the flight deck, and tomorrow, … well, he’ll be wherever he’s needed.

For the moment, in the relative quiet before “Lightning II strikes,” there is a hum of languages, foreign and familiar, in the hangar. A look around makes it clear this is a coalition mission: “For Entry Contact … ” and “NO SMOKING” on containers and boxes are backdropped by the ship’s “In Caso Di Necessita’” and In Questo Locale Vietato Fumare signage. This is a partnership, one Pat says has gone well so far.

“(The Cavour ship’s company) have been bending over backwards to help,” DeLeon says. “They’ve been great,” about some adjustments to the load plan, he said. Flexibility is a necessary characteristic of the relationship, he added, because there will be changes until the ship sets sail.

“’When we work together, it’s going to get better,’” DeLeon said his counterpart told him. “If we keep them happy, we’re happy.”

“At first glance, seeing so many people and so much material to get on this ship seemed an arduous and complex undertaking,” said Italian Navy Master Chief Petty Officer Silvio Cusano. “As the days went by and everyone collaborated, what seemed extremely complicated has materialized into an organizational success that made everyone aware of being able to overcome the most difficult obstacles.

“We are looking to the final goal with more confidence.”

It takes a team
DeLeon, a seasoned logistics supervisor who has detached to two U.S. ships, twice to the United Kingdom’s HMS Queen Elizabeth, and numerous land-based sites, praised his team of four currently embarked, which includes a night-shift supervisor and three material handlers, as well as the many organizations and teams behind what’s happening in the berthed ship.

“Without my team at PAX, none of this happens,” DeLeon said. “There’s no way I can do this by myself.” He said he coordinates with a lot of people to get this done: the PAX team, Lockheed Martin’s Fort Worth transportation, Norfolk Naval Station’s crane operators, and [ALGS] for aircraft parts.

The logistics team is part of a more robust embarked PAX ITF flight test team of almost 200 people. They will conduct sea trials for up to four weeks to collect data that will ultimately lead to the certification for Cavour’s company to safely conduct carrier operations with Italy’s own F-35Bs. 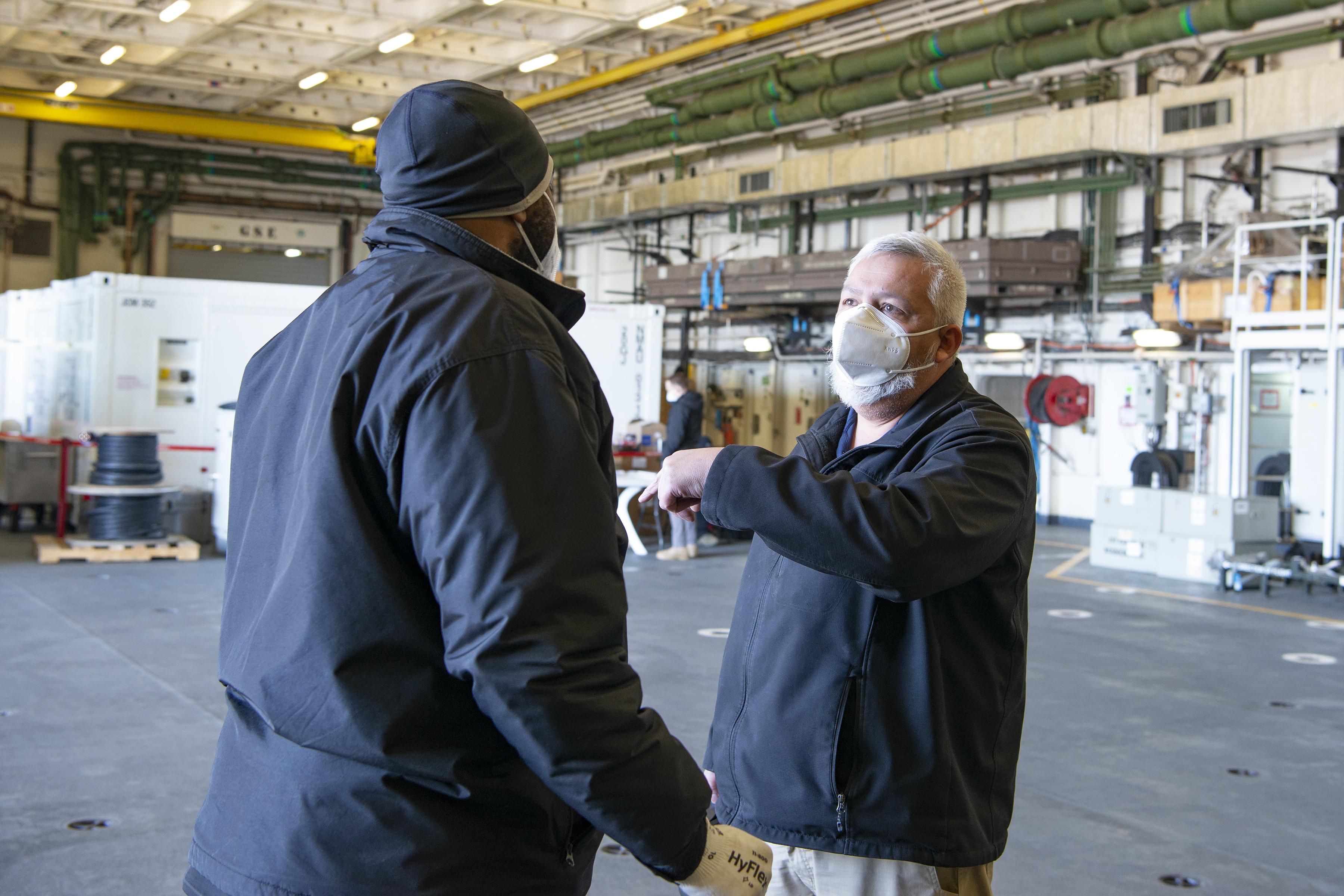