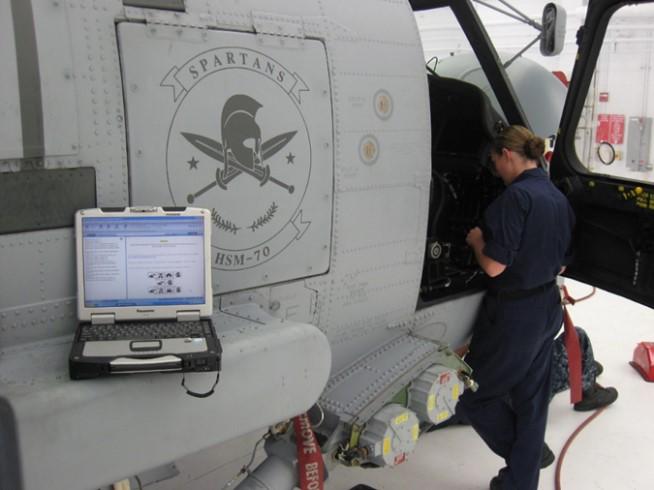 A wireless SPECS in use during MH-60R maintenance.

As a regular part of their jobs, maintainers walk multiple times from parked aircraft to maintenance bays and back again. At times, there can be a bottleneck in the process, as maintainers wait to use networked computers to log the administrative portion of their work. Because the computers are not collocated with the aircraft, maintainers make an average of six to 24 trips per work order, with the average time spent traveling to and from the aircraft between 12 and 24 minutes per trip. After just a few work orders, this transit time adds up quickly across an entire squadron. In addition, local system administrators make technical upgrades to each networked workstation on a regular basis, in part to provide necessary technical publication updates maintainers rely upon to execute their mission. All updates are done manually, which also adds administrative time to maintainer workloads.

In response to these inefficiencies, MARCORSYSCOM initiated a pilot study examining the value of installing wireless capability to improve flight line maintenance process and increase aviation readiness – a strategic imperative for the Navy.

Aviation maintainers use Navy assets – called Portable Electronic Maintenance Aids (PEMA), and coincidentally, PMA-260 was leading a research and development pilot at the same time as the wireless capability pilot, called the Standard PEMA Cyber Solution (SPECS), to standardize advance organic software, hardware, and security configuration to be employed on wired or wireless infrastructure. Recognizing the opportunity for collaboration, these SPECS PEMAs were employed on the wireless infrastructure installed in the New River hangars and were used in this study. All of the PEMA workstations used the Marine Corps network backbone, but were not connected to the Marine Corps Enterprise Network. This enabled PMA-260 to control the security posture of the PEMAs in the study.

With security in mind, the wireless network in each hangar was designed and configured in accordance with the Defense Information Systems Agency Approved Project List and the Security Technical Information Guides for wireless local area network. After the wireless network was installed, the number of trips to and from aircraft ranged from one to four, down from six to 24. The average time spent traveling to and from each work order ranged from three minutes to 12 minutes, down from 12 to 24 minutes per trip. The average number of work orders completed increased from 60 to 76 per day. The average number of ready basic aircraft (RBA), also known as aircraft that can be employed, increased from five to seven per day.

The study examined four alternate potential independent variables in order to measure the effectiveness of the addition of the wireless capability: manpower, work order, aircraft inventory, and flight hours. These variables were examined for any correlation between the wireless technology and the RBA increase. Study results revealed that none of the four alternate variables influenced the positive outcome in a statistically significant way.

Jeffrey Allen, PMA-260’s PEMA integrated product team lead, finds the utility of the wireless capability to be invaluable, “Wireless and SPECS allows maintainers to concentrate on the mission, not be hampered by antiquated manual processes and restricted access to the digital tools they need; connectivity at the aircraft will increase speed and accuracy when maintaining aircraft”.

While a more rigorous study with a larger sample size is required to determine the effectiveness of the wireless capability, the efficiencies gained have potential Navy and Marine Corps-wide benefits.  While citing his inability to provide irrefutable findings due to the limitations of the study, Maj. Gen. Matthew Glavy, commanding general of the squadron that participated in the study said, “I am confident that our squadron has gained efficiencies in man-hours from being provided this technology”. These gained efficiencies in speeding capability to the fleet and improving readiness align with our National Defense Strategy’s strategic approaches of building a more lethal force and reforming the Department for greater performance and affordability.