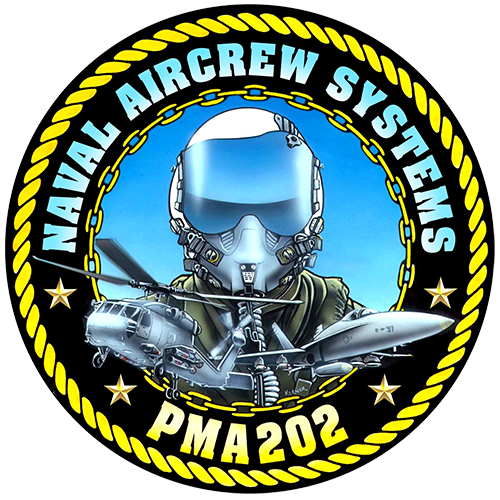 The Aircrew Systems program office (PMA-202) includes all systems that directly support the aircrew and troops or passengers in the performance of their missions, and consist of the functional components, internal and external interfaces, and the environment to optimize human performance, protection and sustainment in aviation operations.

Serves as the premiere organization for human performance optimization and enables the Navy and Marine Corps to be combat effective by providing and sustaining Aircrew Systems that work the first time, every time.

PMA-202 analyzes, develops, and executes innovative solutions that ensure warfighters are equipped with aircrew systems that are "Ready to Fight Tonight", through all phases of naval aviation, with the capability and capacity to "Win the Future".

Capt. Carey Castelein graduated from Northern Illinois University, earning his B.S. in Sociology. He was designated a naval aviator in January 2000.  He holds a Master of Business Administration from Naval Postgraduate School and is a graduate of the Joint Forces Staff College.

Ashore, Castelein completed tours with Air Test and Evaluation Squadron ONE (VX-1) at Patuxent River, Md.; as a Plank owner of the MH-60R Fleet Replacement Squadron, HSM-41 in San Diego, Calf.; and he completed a joint tour with U.S. Special Operations Command as the deputy inspector general.

Castelein also completed tours as the MH-60R Level I integrated product team lead and deputy program manager for Programming and Integration at Multi-Mission Helicopter program office (PMA-299).  In September 2020, Castelein reported to the Pentagon to serve as the executive assistant to the principal military deputy to the Assistant Secretary of Navy (Research, Development & Acquisition).

He assumed the responsibilities of program manager, Naval Aircrew Systems (PMA-202) in Feb. 2022.