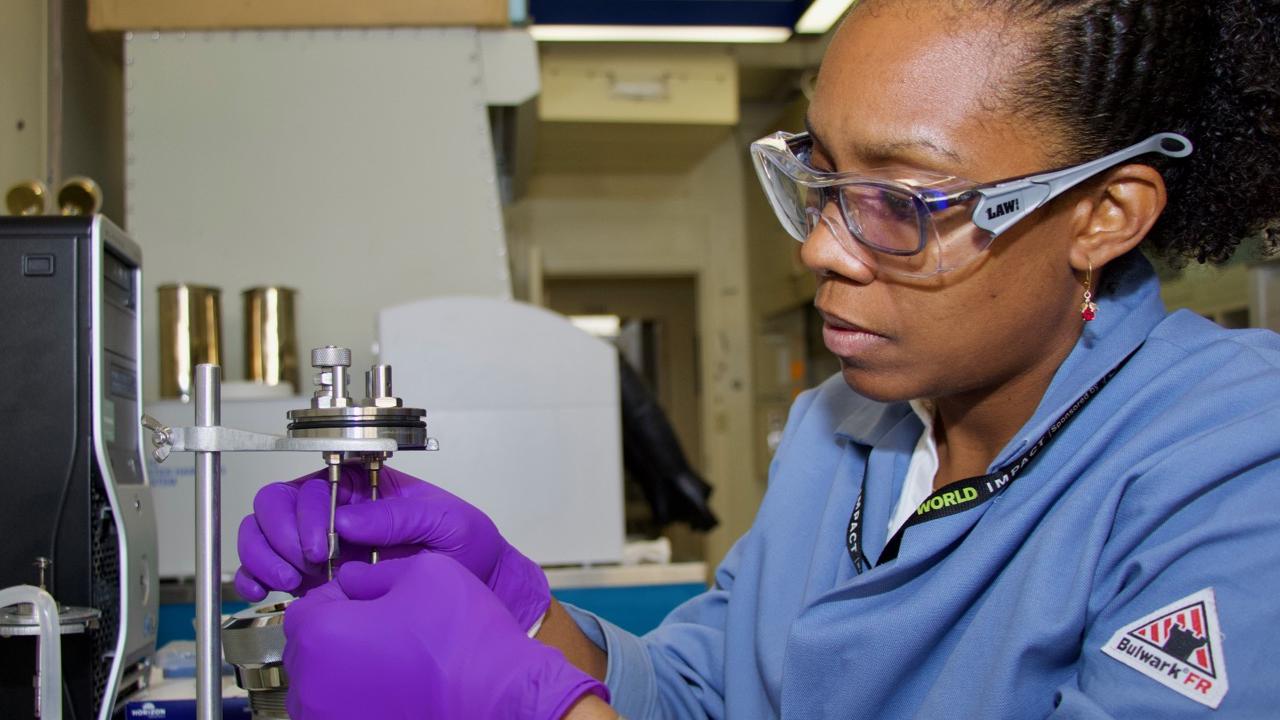 From seawater to jet fuel: NAWCWD teams up with ONR Global for biosynthetic research

“There are plenty of examples how biology has made superior materials,” said Dr. Patrick Rose, science director for Synthetic Biology at the Office of Naval Research Global. “For example, spider silk for its elasticity or nacre in sea shells for its strength and toughness. Synthetic biology is a technology platform that allows scientists to apply engineering principles to re-engineer biological processes and make desired products from such amazing natural features.”

Through its Visiting Scientists Program, ONR Global is funding researchers from the University of Manchester, in a coordinated effort with the United Kingdom’s Defense Science and Technology Laboratory (DSTL), to study the biosynthetic production of molecules in seawater. In December 2018, the Manchester researchers and representatives from ONR Global, DSTL and Defense Advanced Research Projects Agency (DARPA) met with members of the Chemistry Division at Naval Air Warfare Center Weapons Division to further develop a collaboration to use China Lake-patented technology to convert the biosynthetic molecules into high density fuels for missile and jet propulsion.

“I’m thrilled to be working with researchers from the University of Manchester, including Professor Nigel Scrutton and Dr. Kirk Malone,” said Dr. Ben Harvey, NAWCWD senior research chemist. “Patrick has been outstanding. He’s been a powerful advocate of our work and has connected us with both foreign and domestic opportunities that are allowing us to transition our work out of the laboratory and into the field.”

According to Harvey, NAWCWD has developed a method to convert linalool, a naturally occurring alcohol found in plants, into a high-performance missile fuel. He said that it can be expensive and complicated to produce certain molecules from conventional petroleum feedstocks using standard synthetic techniques and that this is where combining synthetic biology with chemical catalysis can have a disruptive impact.

“We’ve been looking for a partner to produce bio-based linalool for nearly a decade to demonstrate a process that starts with biomass sugars and ends with a high performance missile fuel,” Harvey said. “Instead of a typical fermentation process in which a microorganism converts sugars to ethanol, we’re interested in leveraging the power of metabolically-engineered microorganisms to produce molecules for defense applications. The Manchester technology holds great potential for the economical production of large quantities of linalool. This innovation will make our chemical upgrading process feasible and enable transition of the technology.”

Rose and Harvey agree that a biosynthetic approach will not only be effective, but also has the potential to be more economically viable in the long run. Through NAWCWD’s process, linalool is converted to a cyclic alcohol and isobutylene. A chemical dehydration of the alcohol yields the building block for the high-density missile fuel, which is chemically indistinguishable from the petroleum-derived analog.

“There have been many proofs of concepts, but few success stories,” Rose said. “Ben’s work is one of the shining examples of how synthetic biology can be impactful. We are now reaching a point where, in the next couple of years, production on synthetic biology platforms will be competitive and scalable to industrial needs.

We need to support great work, such as Ben’s effort, to accelerate the transition from the laboratory to field applications.”

As to why seawater is an ideal medium for conducting this process, Harvey stated that “unlike conventional synthetic biology that requires sterile conditions, shiny stainless steel reactors, and purified fresh water, the microorganism used by the Manchester researchers can tolerate high concentrations of salt and impurities.”

“This allows for fermentations to be conducted in seawater and may eventually allow for production of fuels, lubricants and chemicals at sea or at coastal Navy bases around the world,” Harvey said. “This approach reduces the demand on precious fresh water resources and dramatically decreases fermentation costs.”

Although this is their first time working with the University of Manchester researchers on this particular effort, Harvey says that the Chemistry team has worked with a number of synthetic biology researchers at institutions including the Joint Bioenergy Institute, Evolva, Amyris, MIT, Zymergen and Duke University. Additionally, the NAWCWD team is currently working on a project with DARPA to demonstrate high temperature composite materials made from biosynthetic materials.

“Synthetic biology has enormous potential for positively impacting our mission and warfighter capability,” Harvey said. “We currently have a project, funded through the Naval Innovative Science and Engineering 219 program, for the development of synthetic fuels with higher gravimetric heats of combustion and improved emissions compared to petroleum-derived jet fuels. We hope to use the biosynthetic linalool produced by the Manchester researchers as a feedstock for some of these fuel blends. In addition, because of the introduction through ONR Global, we are currently working with professor Scrutton on a joint proposal to utilize synthetic biology for the production of energetic precursors.”

ONR Global, through initiatives like the Visiting Scientists Program among others, works to identify world class, international research that aligns with existing science and technology efforts through overseas engagements and partnerships. Their mission is threefold: to maintain technological awareness and prevent surprise; to support innovative, high risk/high reward research that aligns with Naval Enduring Research Priorities and helps accelerate the transition of new technology to the field; and, finally, develop and foster partnerships with institutions around the globe to build strong connections with the global scientific community.

“This is only the beginning,” Rose said. “ONR Global-funded research grants are intended to provide the initial investment for a long-standing collaboration between international researchers and organizations such as NAWCWD. The hope is that this effort will be very productive and lead to future funding provided by ONR or other organizations, so that this great work can continue.”