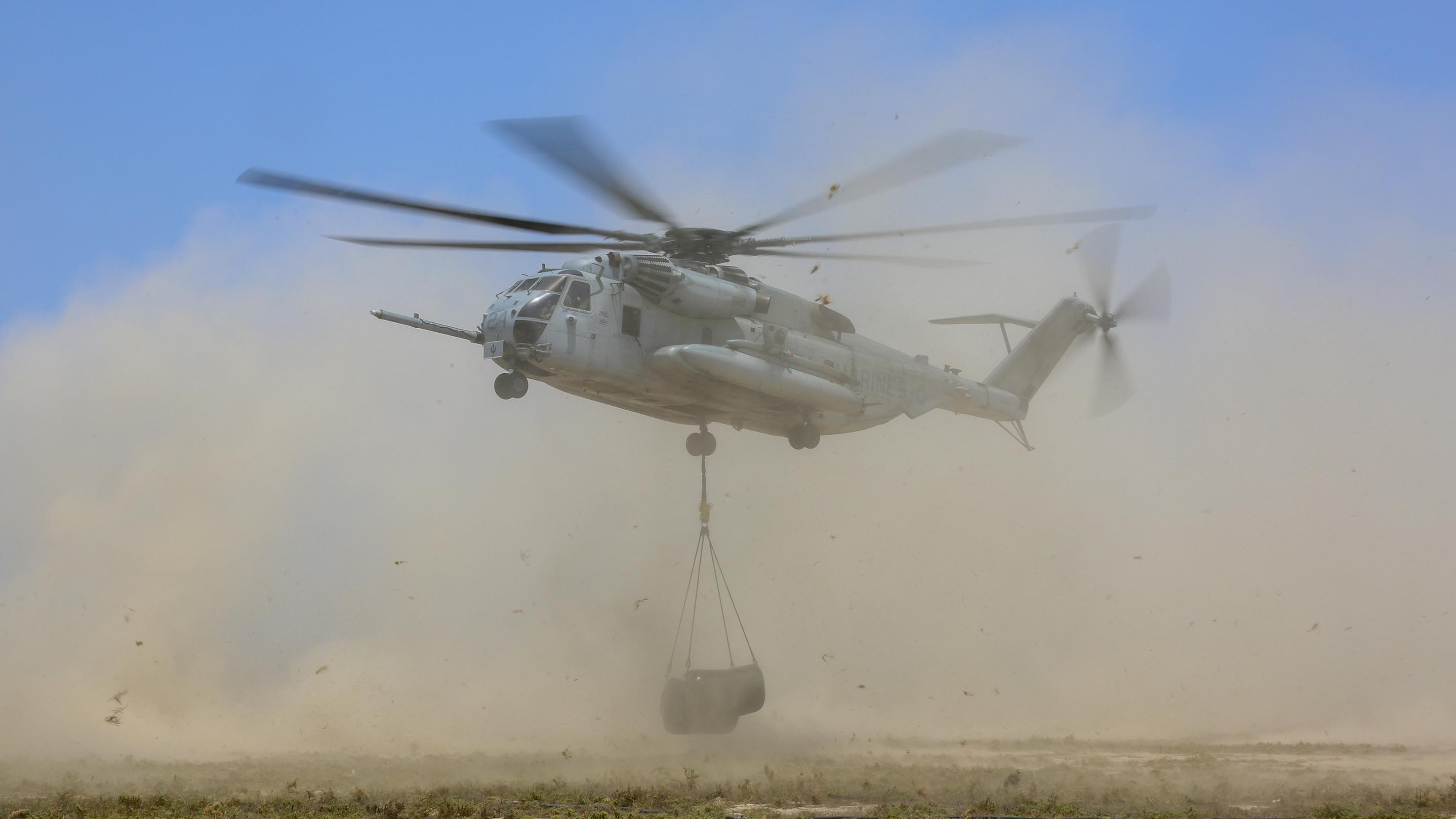 In early May, the Marines in Medium Tiltrotor Squadron 365 (Reinforced) were facing a problem. While deployed to the Gulf of Arabia in support of the 26th Marine Expeditionary Unit, one of the squadron’s CH-53E Super Stallions experienced a broken gear in the main rotor gearbox. The damage rendered the aircraft inoperable and awaiting repair aboard the amphibious assault ship USS Bataan (LHD 5).

Under normal circumstances, a field team would travel to conduct this depot-level repair aboard the Bataan, a Wasp-class landing helicopter dock deployed for a composite training exercise with 26th MEU. Fleet Readiness Center East-based artisans would arrive on location to get the aircraft back up and running aboard the ship. However, circumstances at this time were anything but normal: Movement restrictions emplaced in response to the COVID-19 pandemic prevented a field team from boarding the ship to tackle the repair.

Another solution would be required to replace the sheared accessory drive bevel gear. When the squadron grounded a second aircraft due to a damaged tail gearbox, the need became even more pressing.

Enter the H-53 Fleet Support Team, based at FRCE. Together with a team of aircraft maintainers, these skilled professionals worked to help the Marines identify a solution; obtain the needed parts, tooling and supplies; and successfully repair the aircraft, all within a 20-day timeframe.

“This is what the Fleet Support Team does on a daily basis,” said Robert Jordan, an FST air vehicle engineer with more than 30 years of experience. “When a fleet activity comes across a problem or situation that is not covered by existing procedures, practices or processes, they contact us. We provide troubleshooting assistance, alternate courses for corrective action, or expanded repair procedures or limits.”

Because the field team couldn’t travel to the ship to conduct the accessory drive replacement, having the Marines aboard the ship replace the helicopter’s entire main gearbox was considered as a second option. Unfortunately, there were no main gearboxes readily accessible for issue and, due to the movement restrictions, the ship couldn’t have made port to pick up a spare even if one had been available.

Chief Warrant Officer 2 Jason Hotze, VMM-365 (Reinforced) maintenance materials control officer, had an idea. After closely reading the main gearbox depot manual, he felt the squadron’s Marines would be able to replace the accessory drive assembly alone, which would both limit aircraft downtime and save the fleet more than $1 million. Instead of waiting for movement restrictions to be lifted, the Marines could repair the assembly themselves, aboard the ship, without the need for a port call. Hotze reached out to FST engineers, who worked with FRCE artisans to develop the technical instruction.

“Changing a main rotor gearbox on a CH-53E is an extraordinarily large task, so much so that LHD-class ships don't carry most of the support equipment required to replace it,” Hotze said. “Even the main gearbox itself is not carried on board, and is so large it requires a C-5 (Galaxy) to lift it into theatre. With these logistical constraints in mind, I was determined to at least ask the question on repair options to prevent replacing the entire gearbox.”

The FST engineers set to work, gathering diagnostic data to verify the aircraft’s issue. Once confirmed, they discussed their ideas with engineers from FRCE’s Maintenance, Repair and Overhaul Engineering team, along with David Jones, an FRCE aircraft estimator and evaluator who was once a depot-level mechanic. Jones has years of hands-on experience from his days as a mechanic and being on field teams and has a good understanding of performing the work on-wing and spatial limitations aboard the ship, noted John Munroe, an FST drives system engineer who worked on the project. This input allowed engineering to understand the limitations of performing the replacement in a confined space.

Once the FST had the replacement process formalized in a written format for fleet-level use, the engineers worked with aircraft mechanics from FRCE’s gearbox shop to walk through the repair and ensure minute details were captured.

According to Ashley Dixon, an aircraft mechanical parts repairer work leader in FRCE’s gearbox shop, the H-53 team tackles around four to five main gearbox overhauls each year, although the final number varies based on the needs of the fleet. The accessory drive bevel gear replacement, however, was a different type of repair, and required a different approach. Dixon and Ashton Brinson, another aircraft mechanical parts repairer in the gearbox shop, walked through the entire repair process at FRCE in order to identify areas of concern for the Marines who would be doing the work on the other side of the world.

“The FST came to us and asked if there were any shortcuts they could take – or shouldn’t take – and any problems they might run into during the process,” Dixon explained. “We were looking for a way that would prevent this repair from potentially having a bigger effect on the gearbox.”

“The fundamentals of the repair were actually quite typical of standard organizational-level repairs, except the stakes of this repair were far greater,” Hotze said. “A small mistake of a dropped nut or tool could have been significant in terms of forcing our hand to change the main rotor gearbox.”

The FST sourced a gearbox that was in like-new condition, and Dixon and Brinson began working through the process to provide step-by-step repair instructions to the FST.

“We explained what tools were needed, why those tools were required, and even how to hold the tools so they didn’t damage anything else in the gearbox,” Dixon said. “It was a very in-depth explanation of what was in the manual. The manual is very broad; it gives you a description of what to do, and then you have to take mechanical ability and apply that in order to perform the job. Instead of making the instructions broad, we really narrowed it down. We turned a single paragraph into several pages on a PowerPoint.”

The information provided by the artisans is the type of thing you only learn on the job, Dixon added. Luckily, Dixon and Brinson are fast learners – they have been on the gearboxes team for less than a year, but leaders say they performed like more experienced artisans. Their detailed instructions gave the Marines aboard the ship the information needed to perform the repairs quickly and carefully, with no issues arising.

“The Marines of VMM-365 (Reinforced) are second to none, and once they were given the go ahead they attacked the repair process with tenacity,” Hotze said. “FRCE, the FST and I spent the time beforehand to ensure all the conditions were set to allow the Marines to do what they do best: maintain aircraft and accomplish the mission.”

David Lawrence, FRCE’s gearbox shop supervisor, said he wasn’t surprised by the level of expertise Dixon and Brinston displayed during the project.

“I’m so incredibly proud of their performance and the effort they put into supporting the fleet, on this project and every day,” Lawrence said. “They did a really good job, and they displayed a veteran level of expertise. They probably displayed more experience than they actually have, and if they didn’t tell you, you’d never know these guys haven’t been working in gearboxes for years.

“It’s really a testament to their skill and drive,” Lawrence continued. “The big takeaway for us is that they provided the FST with guidance that could lead to the success of getting this aircraft back out in flight, and that’s exactly what happened.”

“It was a first for us, but I think we handled it well,” Brinson added. “I’m sure we’ll have more difficult tasks coming in down the road, and we’re going to continue to do what it takes to support the fleet. It feels good to know that we’re making a difference across the way there – that’s huge to me.”

Now the FST had written instructions to provide to the fleet maintainers, along with supplemental photographs that would help clarify important details. Logisticians working in the background had been securing the delivery of the necessary parts, tools and consumables to the Bataan, and the H-53 aviation type commander had issued a one-time authorization for the Marines aboard the ship to perform the needed work. The FST provided the information to the Marines aboard the Bataan, who were able to successfully complete the repair. In all, the process took 20 days from start to finish.

Without the efforts of all the stakeholders involved – the H-53 FST, FRCE, the Marines aboard the Bataan, and the logisticians and support staff working hard behind the scenes – the repair wouldn’t have been possible.

“The most important aspect of this entire effort was to maintain the airworthiness of the aircraft’s drive system to ensure the aircraft and fleet personnel are able to successfully complete the assigned missions,” added Stuart Clayton, lead engineer with the H-53 FST. “The key supporting factor was the collaboration of all personnel involved, who were working together toward a common goal.”

Coordination of the various team entities to get technical data and parts – with spares – into place more than halfway around the world proved challenging, Munroe said. Communication was also less than optimal, with the forward-deployed Bataan having limited internet capability and bandwidth limitations. To make coordination even more complicated, logistics and the H-53 Aviation Type Commander were involved in the repair, in addition to the squadron, FST and FRCE. The strong working relationships between these organizations helped eliminate obstacles and contributed to mission success.

“The success was a result of the teamwork with members of the FST, (FRCE) and the fleet all contributing,” Munroe explained. The FST has a strong working relationship with FRCE shop personnel and engineers within the facility’s MRO Engineering department, he said.

“The FST interfaces with fleet maintainers and operators on a daily basis,” Jordan added. “It’s part of what the FST does as a Fleet Support Activity. It is our passion to serve those who serve.”

Hotze agreed the teamwork and relationships built between VMM-365’s maintainers, the FST and FRCE’s artisans provide a boost to aircraft readiness.

“The CH-53 FST were phenomenal throughout the process,” he said. “They worked from the first day to gather information they needed and set to work writing instructions that were both easy to perform and effective. They even went as far to go to the gearbox repair shop aboard Cherry Point and actually perform the repair.

“The most important factor in the repair's success was undoubtedly the close integration with our team and the FST,” Hotze added. “Throughout the deployment, the FST has been an integral part in helping us solve problems, repair aircraft and learn our trade.  Across the (type/model/series), the FST's easy access and determined bias towards solution has tangibly increased readiness and improved our ability to be ready when needed most. The FRC Marines, Sailors, retirees and employees truly make a difference out here on the flight line.” 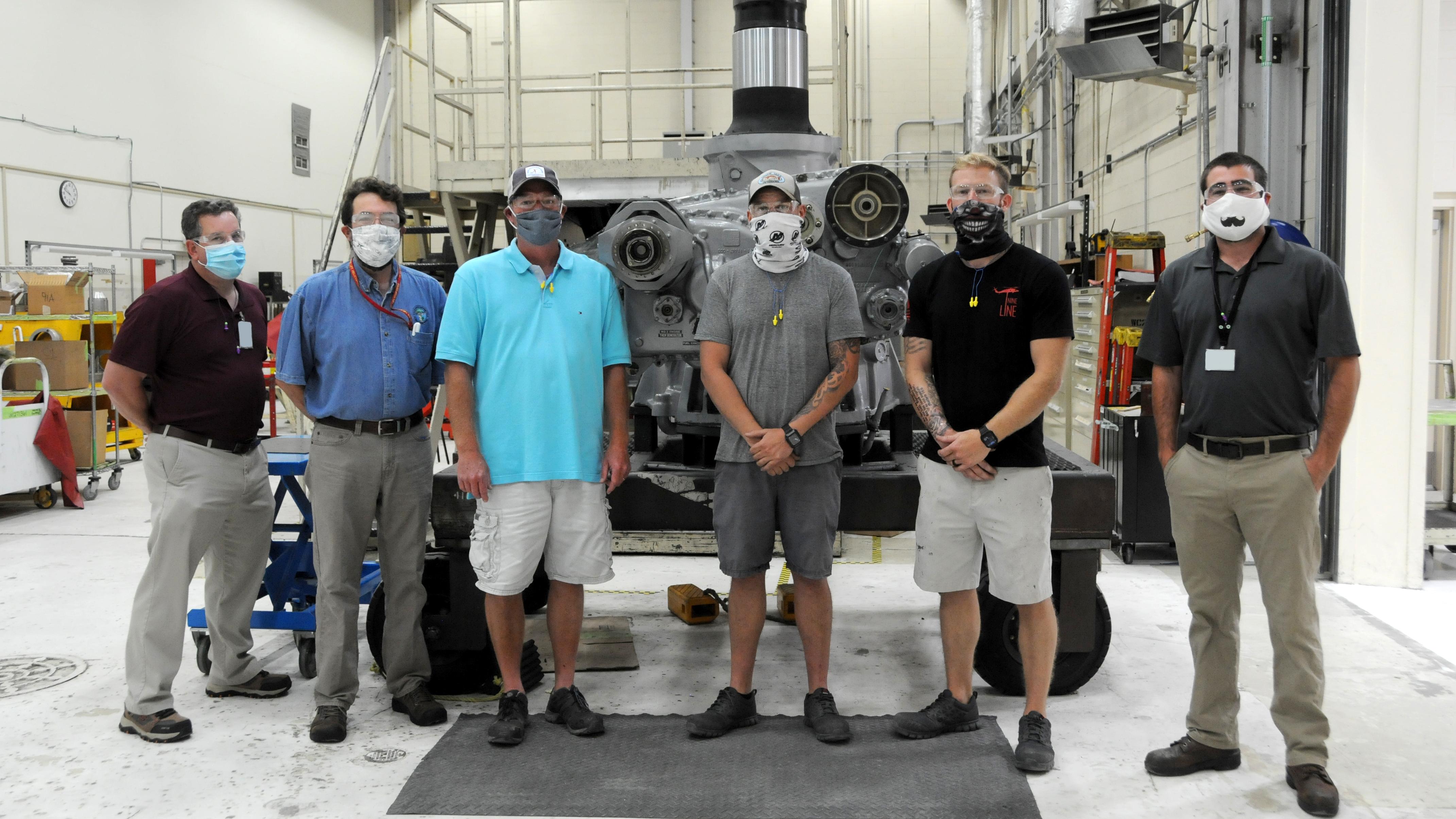