Students learn the ropes during job shadow event at FRCE

What really happens in the shops and hangars at Fleet Readiness Center East? How do the depot’s aircraft maintenance professionals, engineers and support staff keep aircraft flying for the U.S. Navy and Marine Corps? And can anyone make protective eyewear look cool?

Students from Craven County’s Early College EAST (Eastern Applied Sciences and Technology) learned the answers to these questions and got an insider’s view of the work done every day at FRCE during a job shadow event November 5. Twenty-one students from the school shadowed FRCE employees to learn more about the engineering and aircraft repair and overhaul fields.

“These high school students are at the point in school where they are deciding what they want to do and where they want to go to college. The job shadow program provides students with the opportunity to meet with engineers one-on-one, ask detailed questions and really have that experience of coming inside a huge manufacturing facility just miles from home and school,” said Bettina Jahr, engineering education outreach coordinator at FRCE.

“Our engineers love being mentors for these students and helping answer their questions about why they chose to work at FRC East, what obstacles they may have encountered in school and what kept them going,” she continued.  “The younger engineers are also at the age where they are relatable to these students, so that helps.”

“FRC East has been on board with the job shadowing since the beginning,” she said. “Our partnership with FRC East provides our students opportunities to get firsthand information from engineers through job shadowing experiences, STEM Industry Day and guest speakers. We also have the privilege of working one-on-one with FRC East engineers as our students prepare for and participate in competitions.”

Joseph Heebner, a mechanical engineer at FRCE, said this job shadow event marked his second outing as a mentor for the Early College EAST students. Heebner graduated from the Joint Engineering Training Team program earlier this year; he works with the depot’s valves and regulators shops to ensure technical instructions are appropriate, and conducts investigations on aircraft environmental control system components.

“It’s kind of neat to see a fresh pair of eyes coming in, and getting to look at all the stuff we do on a day-to-day basis. It’s good for them to get in here and see what we do,” he said, because the students have the opportunity to explore different careers and ask questions.

In addition to the one-on-one attention from engineers and artisans, job shadowing at FRCE provides the students with other unique opportunities, including a deeper dive into the field of aviation. Seeing FRCE engineers and artisans in action also exposes students to a wide range of STEM-related occupations, and lets them see how different disciplines work together, Sanders said.

“All freshman at (Early College EAST) taken an engineering class, which opens the door to activities and potential careers in a STEM field,” she explained. “When students have the opportunity to visit the depot, they get more specific information about the work that takes place within Naval and Marine Corps aviation and can decide whether they still have a desire to pursue a career that aligns.”

“A lot of the local students have a strong interest in aviation, so once you provide them with the opportunity to come observe some skill sets they can practice and employ in the future, that just spurs on continued interest and passion in pursuing a career in engineering,” Jahr added. “They get to see for themselves what engineers do aboard FRC East.”

But aviation isn’t the only program the students see in action at FRCE, Sanders noted.

“While job shadowing at the depot, students are exposed to a variety of career opportunities and can see how they build upon each other in order to get the final result,” Sanders said. “When job shadowing at many other locations, students get to experience one specific job.”

Sophomore Keegan Scott said he enjoyed seeing the range of engineering careers represented at the depot as he shadowed Erik Quinn, an overhaul and repair supervisor on the AV-8 Harrier line.

“I figured this would be one of the best places to go to get a wide grasp of how many different types of engineering there are,” Scott said. “I’ve always been interested in engineering, and this was great – I got to see all sorts of different things. It was my first time visiting FRC East, and I definitely had a great time”

“I was really excited to come to FRC East because I’ve been looking at a career in engineering, and maybe computer science, and I have family members who work or have worked on base,” Cary said. “I thought it would be fun to come check it out and see what it’s like working for a government facility. I really enjoyed it and I would love to come back here next year.”

The students were excited to see the aircraft and enjoyed the opportunity, which many described as “awesome,” Sanders said. However, a show of hands at the end of the day gave that the verdict on whether safety goggles can look cool – the answer was an emphatic no.

FRCE conducts engineering outreach in order to promote STEM education in the community and prepare students for future careers in technical fields like those at the depot, Jahr said. Efforts include getting engineers into classrooms in area schools, responding to educators’ requests for engineering support and providing high school students with the opportunity to come inside FRCE with engineers and see what they do every day. 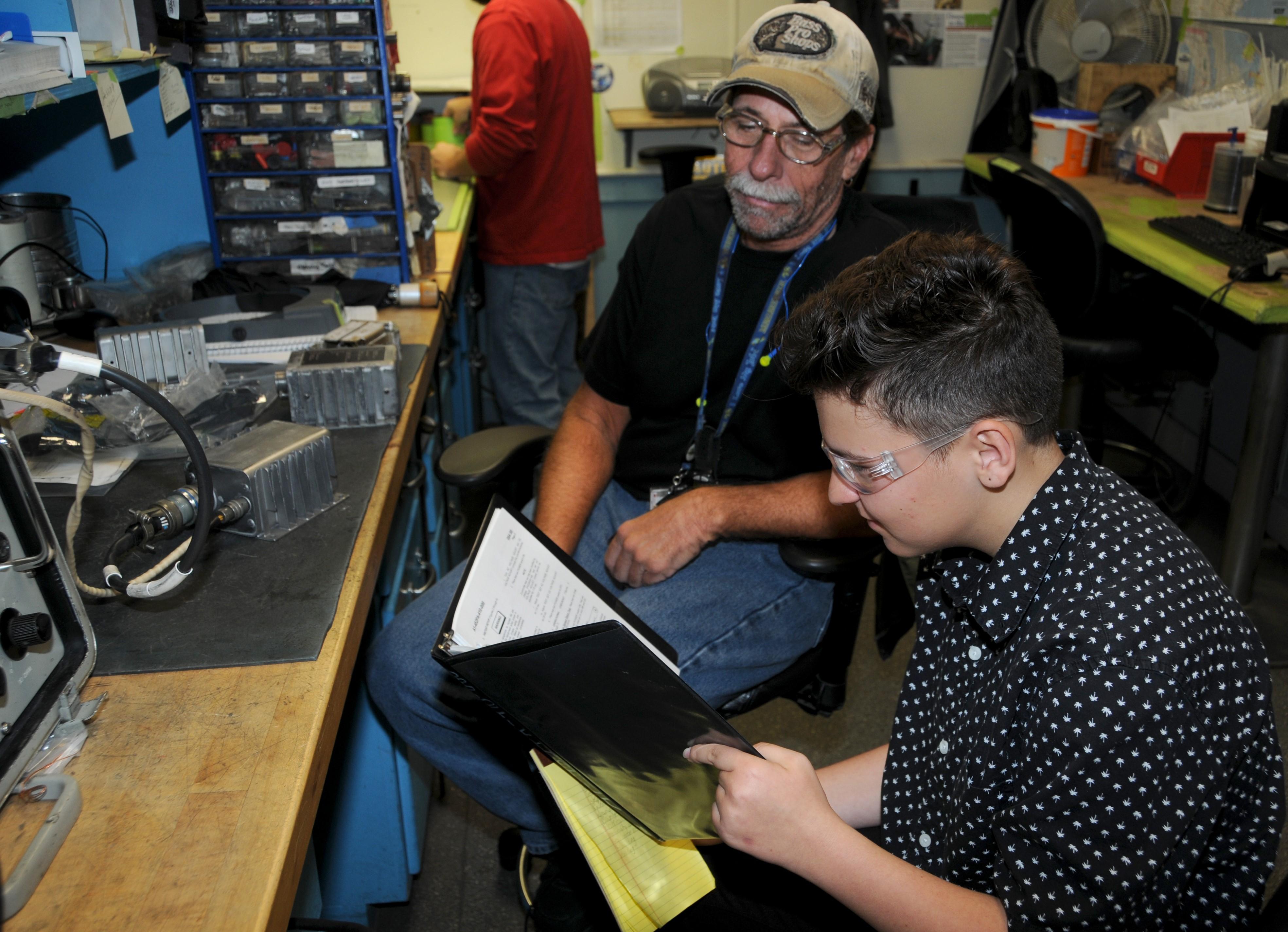