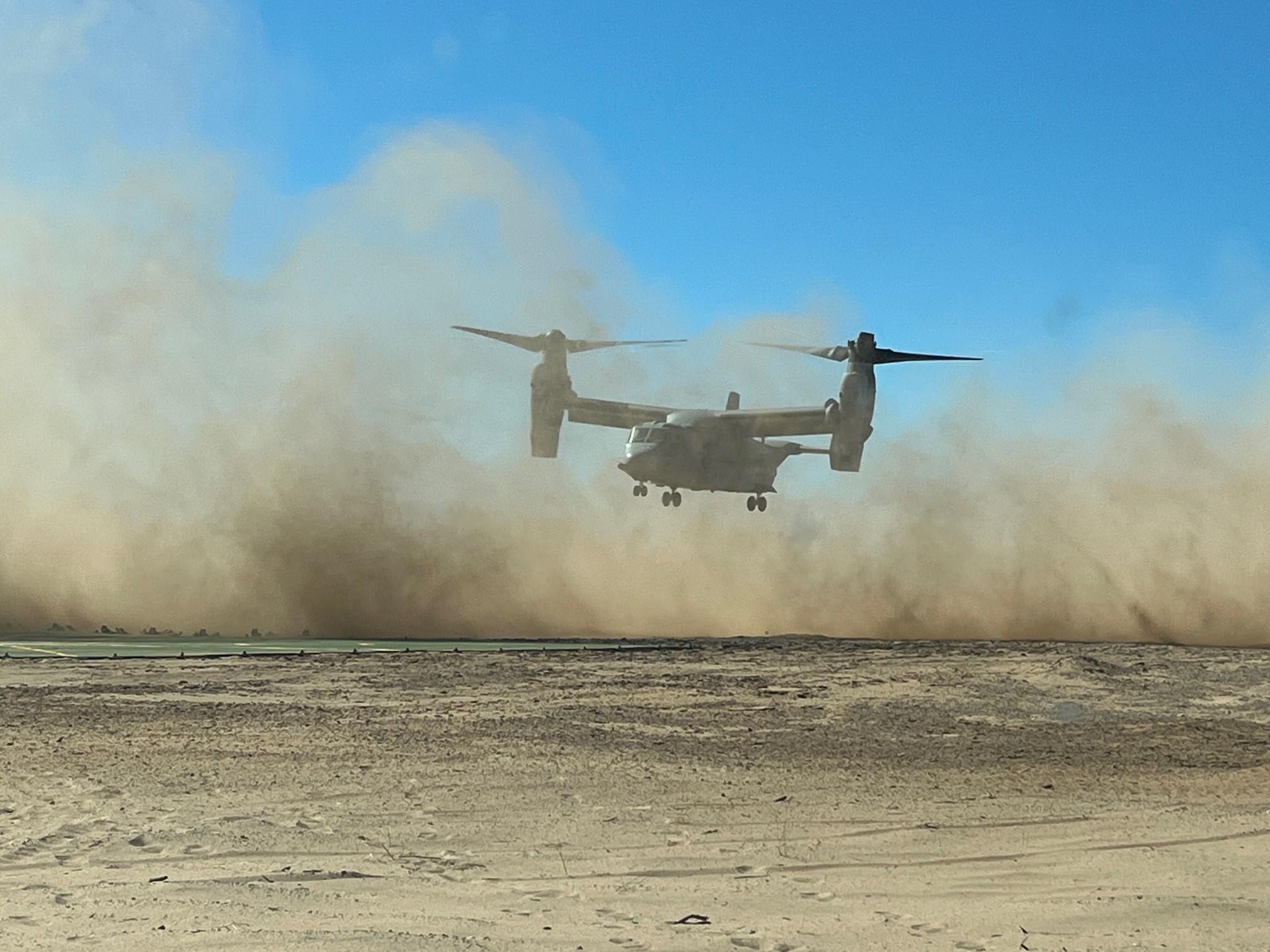 ALRE’s EAF team spent two years searching for a reliable replacement for AM2 Vertical Takeoff and Landing (VTOL) matting, which has been in service since the 1960s. While AM2 remains a viable solution, it’s heavy, time-consuming to install, and challenging to deliver to austere environments.

Although the Marine Corps aimed to incorporate lightweight matting into service for years, research and work throughout 2020 and 2021 finally brought a promising commercial off-the-shelf (COTS) solution to the surface. Testing continues to prove the new lightweight matting’s reliability and promise as the Marines’ expeditionary matting of the future.

The benefits of the new lightweight matting offer substantial reductions in weight and ease of setup for U.S. Marines: this lightweight matting is also the first viable replacement test teams have found for the United States’ NATO partners, who per OSHA standards, cannot lift and place the existing 12-foot panels of AM2, which are about 150 lbs. The lightweight matting panels offer a one-man lift to service members from all NATO countries, while all the panels and installation equipment for an entire VTOL pad fit into a single, standardized ISO container.

“In 2020, we tested smaller aircraft, and on this last round we looked at some of the heavy and medium-sized aircraft; the CH-53 Sea Stallions and V-22 Ospreys,” said McCammon. “Through the collaborative efforts of the fleet, PMA-251, and our friends at the Penn State Applied Research Lab, we proved the engineers’ theories and models true as to how the system would react to Marine Corps aircraft; we surpassed all expectations we presented beforehand.”

Clint Hunt, EAF Contract Service Support, said the reduction in groundwork and preparation before laying the mats will be transformative for EAF teams.

“We no longer have to bring in graders, bulldozers, or drafting and survey teams; lightweight matting conforms to the ground,” said Hunt. “We can take away that whole aspect of heavy equipment and focus on moving towards the expeditionary goal of the Marine Corps.”

The new anchoring system can also be installed using exclusively commercial tools, which are included in the manufacturer’s box. This ensures the teams are not burdened with packing accessory kits. Previous anchoring systems involved 6-foot long, 4-inch-wide cruciform stakes, which Marines drove into the ground, attached to anchors, and tied to the matting; a multi-step process that required a jackhammer and front-end loader.

“Freeing ourselves of hydraulic tools in the desert is greatly beneficial; sand is not a favorable environment for hydraulics, and, with the addition of the heavy equipment, installation takes five times longer,” said Hunt. “The installation for lightweight matting required a simple electric hammer wrench and drilling the new screws into the ground; when teams are driving 80 plus stakes into the ground, the time adds up. Now we can install five or so at a time.”

Hunt concluded the testing in 2021 built confidence and provided proof of concept of commercial possibilities available to the Marine Corps.

“Testing in Yuma brought everything together; installation, expectations, timelines, and it all worked out exactly the way the Marine Corps hoped it would,” said Hunt. “Both the concept and product meet in line with the National Defense Strategy and the 2019 Commandant’s Planning Guidance, which provides maneuverability for the fleet to utilize COTS products and field solutions faster.”

Matthew Schettino, test engineer for PMA-251, has worked on AM2 replacement for several years. He credited his successful planning to teamwork and coordination between NAVAIR, the test instrumentation groups, pilots and aircraft from Marine Operational Test and Evaluation Squadron (VMX) 1, operational aircraft from the 3rd Marine Air Wing, and collaboration with manufacturers.

“Our use of a COTS product is introducing another benefit; many of the manufacturers are based on the feedback we provided from the first and second rounds of testing,” said Schettino. “They did the design, but the result is really a product of our previous feedback and testing.”

“If we hit all the wickets within the CDD, we will look to field this solution and give our Marines an opportunity to try them and give feedback,” said McCammon. “Further on down the road we will start working on short take-off and landing and finding new solutions for small runways with a VTOL pad.”