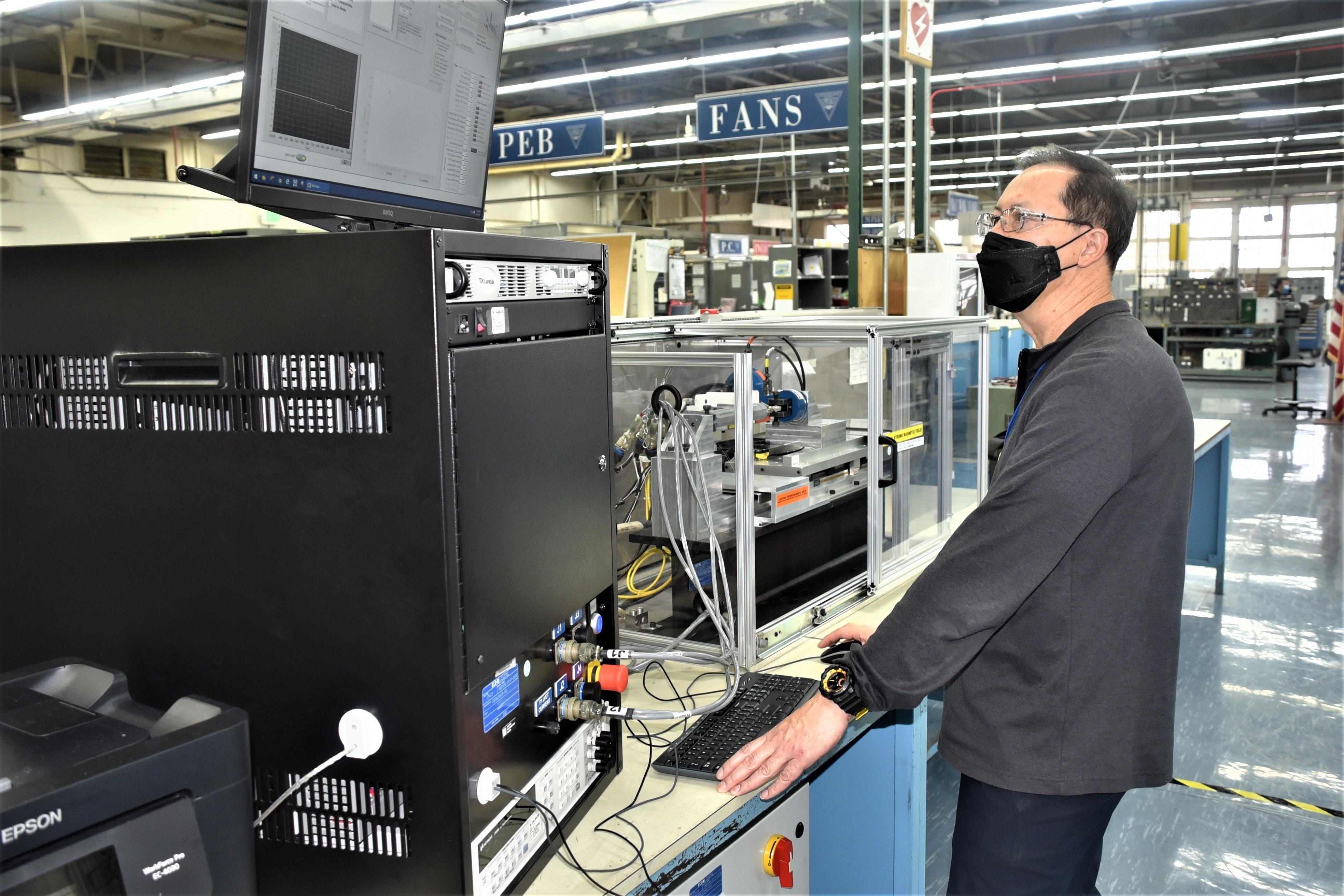 Located in the actuator shop in Building 378, the Feel Trim Actuator test stand will reduce the turn-around-time (TAT) to ready-for-issue (RFI) units by an estimated 40 percent or more, according to electronic mechanic Henry Pickens.

“The time and cost savings will be immediate as well as long term for the organization, to our fleet customers and in support to our warfighters,” Pickens said.

The test stand will be used in testing the airframe’s Lateral Stick Position Sensor and the Longitudinal Feel/Trim Actuator.

“The Feel Trim Actuator Test Stand is dubbed from the nomenclature of the ‘Longitudinal Feel/Trim Actuator’ position sensor. The terms ‘Feel/Trim’ apply to the position sensors in that when a lateral or longitudinal input is applied to the sensor, the internal spring assemblies provide artificial feel forces to the pilot. The Linear Variable Differential Transducer (LVDT) senses the lateral or longitudinal position inputs, translates them to electrical signals and relays them to the flight control electronic system,” Pickens said.

In electrical engineering usage, hysteresis occurs “…with magnetic materials so that, if a varying magnetizing signal is applied, the resulting magnetism that is created follows the applied signal, but with a delay,” according to Collins Dictionary.

Manufactured by Eaton Aerospace and costing about $568,000, the primary benefit of the new stand is the conversion to a digital environment, Pickens said.

“This test stand has been assigned Serial No. 0001, its construction is unique and is currently the only model that exists in any FRC or anywhere in the country,” he noted. “Also, we remain the only FRC work center for capability of test and repair of the F/A-18 Super Hornet Lateral Stick Position Sensor for the Navy.”

“The computer driven test procedures, which border full automation, utilize proprietary software that enables the operator to interface more closely with the test system. The more advanced test procedures will provide a new and improved ability to command and monitor tests, review and visualize data, and diagnose problems,” he said. “Another significant benefit is that it will expand shop workload capability by inducting two new Family Identification Codes or components, as well as re-establishing capability of a third --- the legacy Longitudinal Feel Trim Actuator.”

He added that the legacy test fixture will remain as a backup system and for its capability to test throttle load and rudder sensors.

The Eaton test stand will be operated by three electronic mechanics and one electrical equipment repairer.

The unit is comprised of three major components: a high voltage supply cabinet that provides the system’s power and contains a system servo drive; a control cabinet that houses software modules and the system PC; and a linear test fixture which houses the slide table and actuator connections to enable interface between the test stand and unit under test (UTT).

“The UUT is mounted using the fixed end bearing while various loads are applied to the rod end bearing from the linear slide table. Other sub-assembly components include the computer keyboard, mouse and 24-inch display,” Pickens said.

Calibration and certifications for the test stand were completed in April, but full use of the unit will not be available until Naval Air Systems Command (NAVAIR) publication references and updated Local Engineering Specifications (LES) are submitted and finalized, Pickens said. These are the final steps prior to use in shop production.

He added that annual production numbers for the three sensors, excluding the Super Hornet lateral, are not available because of the new capability.

However, the potential production is impressive: “The E/F model lateral position sensor has averaged 15 to 25 units per quarter. With the capability of the new test stand, those numbers could be in the arena of four times that,” he said.