A group of first-class midshipmen from the U.S. Naval Academy (USNA) had an opportunity to see up-close some of the aircraft and systems they will someday be using in the fleet during a tour of Naval Test Wing Atlantic squadrons onboard Naval Air Station Patuxent River last week.

The 31 aerospace engineering seniors began their Nov. 9 tour with an introduction to the wide range of fixed-wing and rotary-wing aircraft used to train future test pilots at the U.S. Naval Test Pilot School (USNTPS). From there, they visited Air Test and Evaluation Squadron (HX) 21, where they were briefed on the H-60 Black Hawk and AH-1Z Viper helicopters and V-22 Osprey tilt-rotor aircraft. Next, they were introduced to the P-8A Poseidon, E-2D Hawkeye, and MQ-4C Triton aircraft of VX-20. Their last stop was VX-23, where they were able to look inside F-35 Lightning IIs, F/A-18E/F Super Hornets, and EA-18G Growlers.

"For many of these students, this is their first trip off campus beyond a 25-mile radius since early summer," said Rob Niewoehner, a professor of Aerospace Engineering at USNA. "As they're slogging through project work and their final exams, the tour offers a glimpse of the opportunities that are available to them beyond their first sea tour."

Niewoehner, a retired Navy Captain, is a 1989 graduate of USNTPS who flew the F-14 Tomcat and F/A-18 Super Hornet from NAS Patuxent River in the 1980s and 1990s. He has organized tours of the base's developmental test squadrons for midshipmen since 1998.

"It's important for the midshipmen to recognize the people at Pax River and China Lake who are giving them the good stuff," he said. "Even if they don't end up here, they will be flying their products."

Niewoehner explained that being a test pilot has given him the opportunity to live and work at "the intersection of operators and technologists," which has been both personally and professionally rewarding.

"An engineering degree opens doors for these midshipmen to be able to do that someday, too," he said, proudly pointing out that the two USNTPS instructors leading the tour of the school's hangar, Maj. Camille Lampert and Lt. Cmdr. Nick Denison, had both been his students at the Academy.

Pilots and engineers who graduate from USNTPS and pursue careers in flight test often go on to become acquisition experts, ensuring that the aircraft and systems used by Navy and Marine Corps warfighters are safe, reliable, and ready when needed. Opportunities open to them in the private sector include designing and test-flying systems that could someday take people to the moon and Mars, and beyond.

"USNTPS opens a lot of career doors and closes none," Niewoehner said. “I want them to know this could be part of their futures.” 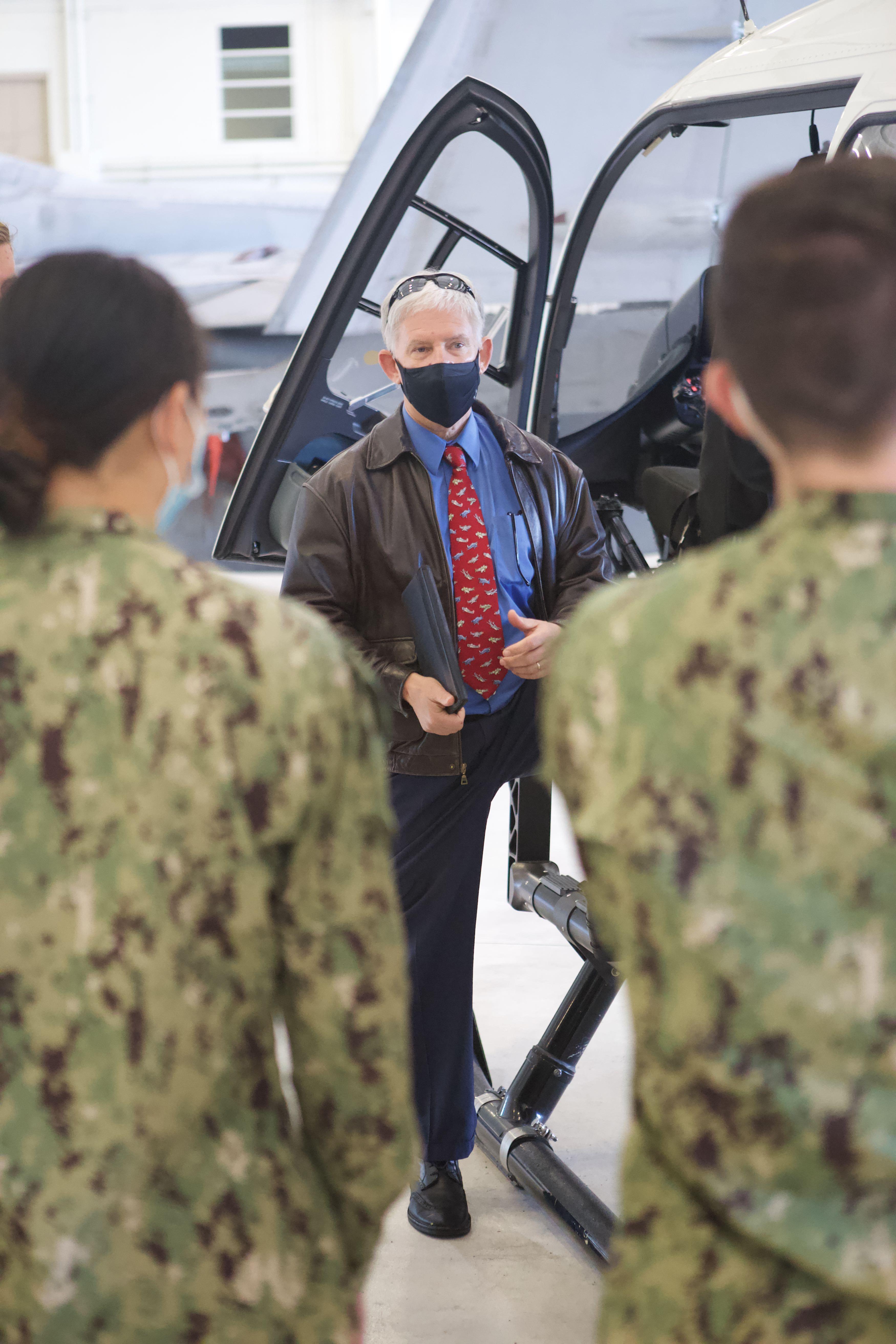 Prof. Robert Niewoehner, an aerospace engineering instructor at the United States Naval Academy, listens as midshipmen participate in a briefing on flight test aircraft at the U.S. Naval Test Pilot School during a tour Nov. 9, 2020.