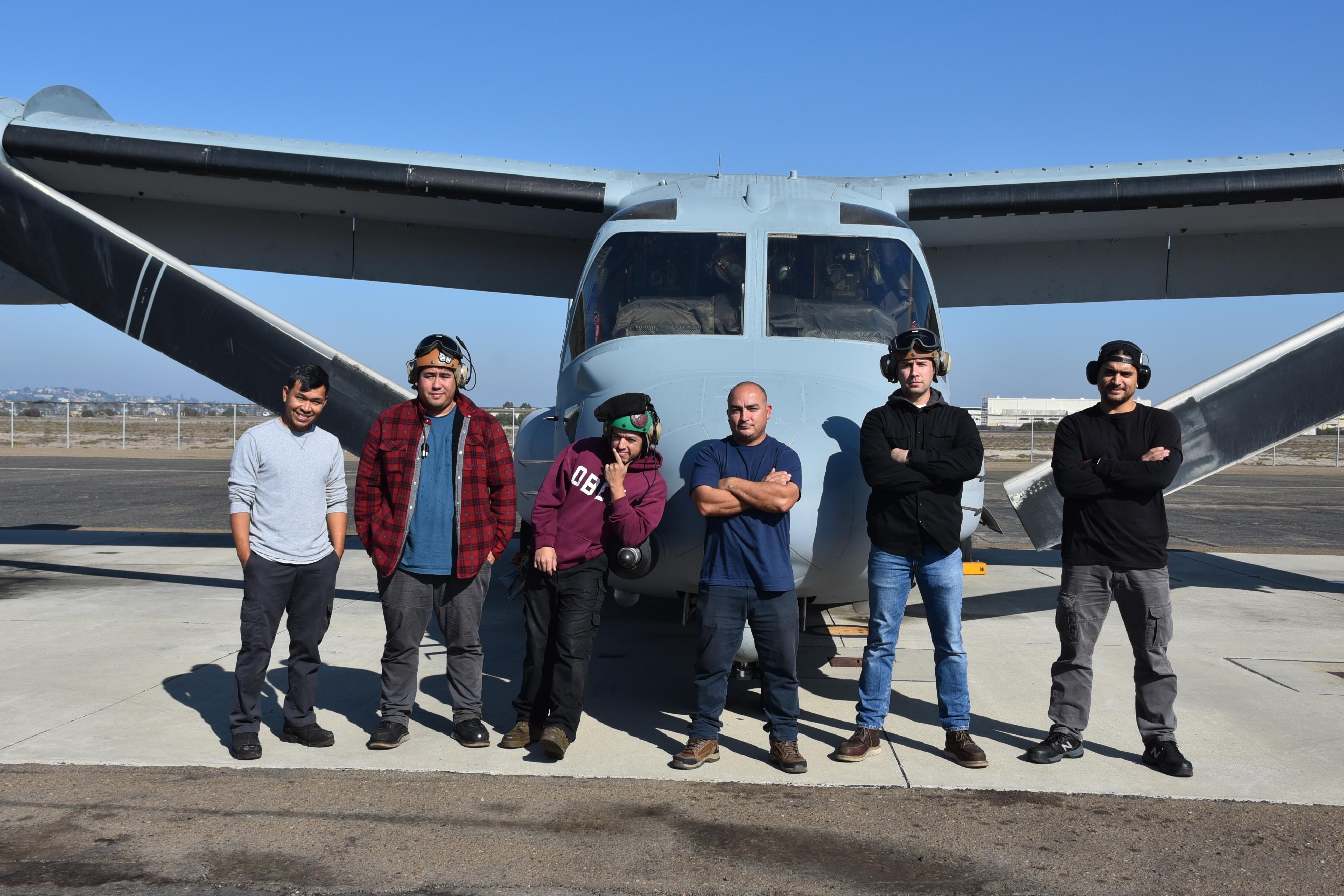 The MV-22 Osprey schedule for delivery to VMM-362 is pictured at the test line December 1 with some of the program’s artisans. From left to right are: Von Charlie Villaro, Melson Santiago, Jonathan Hernandez, Abner Ventura, Danil Rybakov and Ramon Lopez. (U.S. Navy photo)

Since then, the command’s approach to PMI-2 servicing of the tiltrotor aircraft has evolved to an improved readiness level perhaps unseen in the maintenance any other airframe.

PMI-2, along with PMI-1, comprise the Navy’s Integrated Maintenance Program (IMP) that was developed to maintain the aircraft and its structural integrity.

“The work load standard for the PMI-2 cycle time is 482 days, however, under the Naval Sustainment System (NSS), leadership has determined 250 days to be an appropriate cycle time,” he said.

The NSS is a Secretary of the Navy initiative formed in 2018 designed to increase production and speed.

Dixon attributed the program’s production line with meeting, and exceeding, the NSS directive.

“Our production line works diligently to highlight product constraints and delivers short and long-term resolutions to ensure production goals are achieved,” he said.

He said that some of the key factors that improved TAT included the production line gaining more experience with maintenance procedures; the hiring of aircraft examiners who have Organizational-Level experience; the qualification of two aircraft examiners to ground turn the aircraft; and implementing major changes to the PMI phases including rearranging phase requirements.

The command’s V-22 production line is staffed by 30 artisans who are mechanics, electricians, sheet metal mechanics and aircraft examiners. The line is supported by a variety of administrative positions that include production control, quality assurance, logs and records, and leadership roles.

Marine Corps squadrons fly the Ospreys to the command’s test line for PMI-2 where the aircraft undergo the induction process prior to towing to Building 333, where the maintenance cycle is performed.

“PMI requirements consist of disassembling the aircraft to evaluate the structural and wiring inspection requirements per the V-22 PMI specification,” Dixon said.

“We repair or correct any discrepancies that are noted. Then reassemble, test and troubleshoot the aircraft to ensure all systems that have been disturbed are functional and flight ready; all of which is easier said than done, as extensive maintenance is involved within this process.”

When complete, the aircraft are returned to the test line for ground turn operations and a function flight check (FCF) prior to delivery.

Meanwhile, if all goes well during its FCF, the most recent Osprey that was inducted in May is projected for delivery to Marine Medium Tiltrotor Squadron 362 (VMM-362) at MCAS Miramar in less than 227 days, three weeks under the NSS designated cycle time.