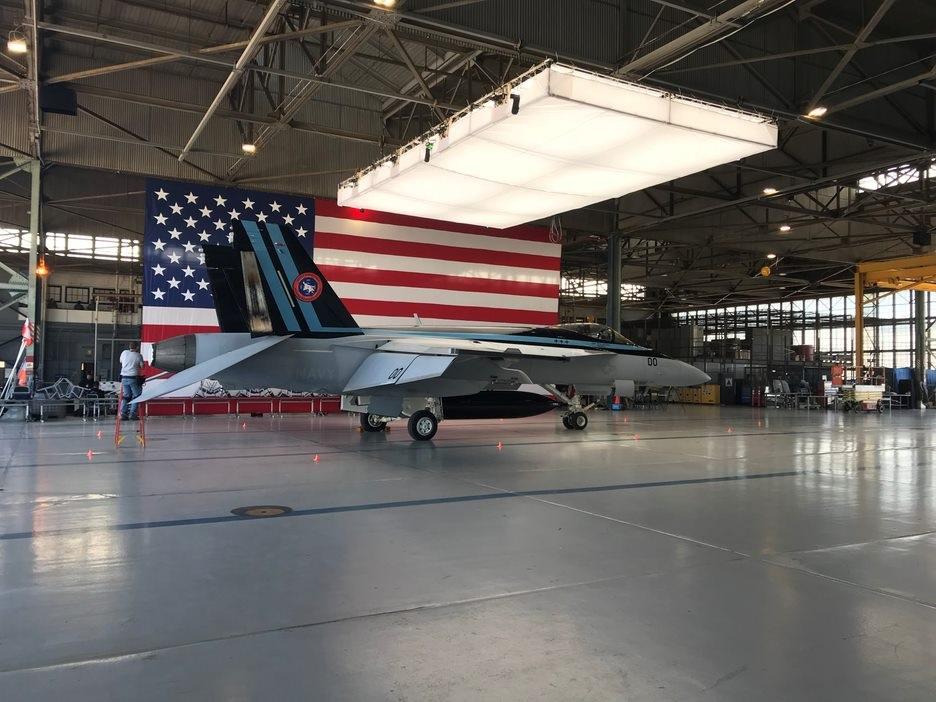 It takes a lot to make a movie.

In the case of Tom Cruise’s latest film, “Top Gun: Maverick,” it took the artisans, engineers and staff of Fleet Readiness Center Southwest (FRCSW) to not only provide an authentic presentation of the aircraft used in the film, but also support for the filming itself.

FRCSW painted one of the film’s two F/A-18 Super Hornet fighter aircraft and led the installation design of the audio/visual (A/V) equipment fixed in the cockpit of an F-model Super Hornet used in the movie’s production.

“When it came time to start installing the A/V cockpit equipment and the production team was in place at our first location at Naval Air Station (NAS) Lemoore, we had meetings with the director and some of the producers, including Tom Cruise. He was very passionate about making this the greatest aviation film of all-time,” said F/A-18 MRO Engineering Department Head Jonathan Ramba who oversaw the installation.

“The production crew used new Sony Venice 6K cameras that weighed about eight pounds with a lens. The cinematographer wanted four of these to be installed on the aft seat’s glare shield, but settled for three full camera bodies mounted and a sensor block, which acted as a fourth camera. All said, the total weight of the equipment on the aft glare shield was about 40 pounds.”

Ramba’s involvement with the filming began in July 2018 with a call from the F/A-18 & EA-18G Program Office (PMA-265) asking FRCSW’s F/A-18 Fleet Support Team to accommodate a visit from the Top Gun production crew.

“I was the E/F/G FST Structures Engineering Lead at the time, so I was tasked to lead this project,” Ramba noted.

About two weeks later, he traveled to NAS Lemoore to discuss the installation and locations of the cameras on the interior and exterior of the aircraft.

He developed a proposal afterward and worked with Naval Air Systems Command (NAVAIR) to establish the required action for approval.

Filming was slated to start by the end of September 2018, and a fit check had to be completed approximately two weeks prior to that.

“After all mounts were designed and approved for use by the PMA-265 Airworthiness Certification Engineer (ACE), I coordinated with third-party machine shops designated by Paramount Studios to have all parts machined to specifications and delivered to the production crew,” he said.

“Ultimately, all designed mounts fit perfectly, and all filming equipment was successfully installed. After a shake-out flight, Tom Cruise went on a quick test flight and it was determined that the entire assembly worked perfectly.”

Next, to gain an Interim Flight Clearance (IFC), Pacheco developed drawings to reflect the aircraft configuration change that included the installation processes of the mounts and cameras, and the temporary removal of any components.

“After all flight limits were established within the IFC by PMA-265, I quickly familiarized myself with them and ensured the production personnel and flight crew were aware of the limits to avoid any issues,” he said.

Approximately one month before filming, Hernandez completed a crucial strength analysis for the design of the cockpit camera mounts in less than three weeks.

He also analyzed the glare shield, a 0.063-inch thick aluminum component that held the 40-pound camera rig, and subjected it up to a 7.5 g acceleration rate along multiple directions.

“I used MSC Patran and Nastran (software) to simulate the added equipment with the existing affected structure being subjected to the considered loads,” he said.

“We replicated the paint job on that aircraft for non-flying scenes and close ups of the actors near the aircraft on the ground,” said Tommy Sapien, Aircraft Services Paint Production Line Manager.

After applying several polyurethane top coats and stencils, the project was complete in five days.

“Getting the details correct were a challenge because we did not work off of any blueprints,” Sapien said. “We did the paint job based on pictures we had of the two-seater Super Hornet from the flying scenes in the movie.”

In February 2020, the E-model Super Hornet was delivered to FRC Southeast where it underwent modification. It is currently a Blue Angel.

Collectively, FRCSW and FRCW teammates devoted more than 1,000 hours to the production of the film while simultaneously completing their real jobs: Providing mission-ready Super Hornets to the fleet.

“Top Gun: Maverick” was released in theaters May 24, and no, Tom Cruise did not actually fly an F/A-18 Super Hornet. A real “Top Gun” piloted the aircraft. We hope the audience enjoys the ride!