Allison Popernack, left, FRCE materials engineer, and Chris Gladson, FRCE Materials and Processes Branch head, examine aircraft parts being processed in a large heated chemical strip tank at the facility. The chemical strippers are used to remove organic coatings from aircraft parts, so that they can go through nondestructive inspection to look for cracks or flaws in the metal that might affect the integrity of the part.

A team of Fleet Readiness Center East (FRCE) materials engineers recently extended a helping hand to their colleagues in the Coast Guard to help them solve a puzzling organic coating removal problem.

FRCE’s Materials Engineering Division is responsible for the materials and processes that affect an aircraft’s surfaces, such as bonding, painting, stripping and corrosion prevention. Engineers usually support aircraft maintainers in FRCE’s production shops or in Navy or Marine Corps fleet units around the world. Recently, engineering personnel at the U.S. Coast Guard’s Aviation Logistics Center (ALC) in Elizabeth City, North Carolina, reached out to FRCE for help on removing organic coatings from aircraft parts.

The ALC’s environmental protection processes allow the use of certain chemical strippers to remove coatings from aircraft parts, but they were not always effective at chemically removing coatings from parts. To further complicate the issue, maintenance manuals state that other paint removal methods like blasting or sanding cannot be used on parts that require non-destructive inspections for cracks after stripping, according to Chief Warrant Officer 3 Hayward Workman, Industrial Operations Division Engineering Support Branch chief.

“Often, the technical manuals we use will state chemical stripping only, which means we can’t use sanding, because you don’t want to remove material. You don’t want to blast with plastic media because it can leave traces of the coating and the media, which can get embedded and reduce detection of cracks or defects in the part,” said Workman. “Chemical stripping was the only way to remove the coating and be in accordance with the procedures, but it was impossible with the kind of strippers that were available at the ALC. That’s when I reached out for help from FRCE.”

Workman contacted Chris Gladson, Materials and Processes Branch head at FRCE, for suggestions on how to solve this dilemma. Gladson invited Workman and his team to tour the paint stripping facilities at FRCE and to brainstorm on solutions to the Coast Guard’s problem. FRCE and ALC were using similar methods of paint stripping, but differences in Coast Guard and Navy regulations allowed FRCE artisans to generate a higher throughput than those at ALC, Gladson said.

FRCE has a long record of environmental stewardship, and its aviation maintenance policies and procedures reflect that commitment to environmental compliance. Workman presented the information he received at FRCE to ALC safety and engineering teams to justify the conclusion that more aggressive stripping agents could be used safely and effectively to remove the more resistant coatings from parts. The ALC adopted similar procedures and safety equipment to that used at FRCE to ensure that the stripping agents were used in a safe and environmentally sound manner.

In the time it took to establish the new procedures and acquire the necessary equipment, Workman said the Coast Guard facility developed a backlog of more than 60 parts that needed to be chemically stripped before they could be inspected and repaired at the ALC. Once again, FRCE was able to assist by helping ALC catch up with demand.

Linda Holton, business office operations specialist in the FRCE Workload Acceptance Branch, works as a liaison between FRCE and the fleet units that may unexpectedly need its services. She helped the ALC arrange for FRCE’s assistance with the backlogged parts.

“Although FRCE’s workload is planned out far in advance, occasionally a fleet unit will need assistance on an emergent basis. That’s when they reach out to us,” Holton said. “Our team communicates with the planners and the supervisors to ensure the emergent parts can fit in with the regular planned work. We get a lot of satisfaction from helping the fleet units when they need us most.”

Gladson said the Small Clean Shop at FRCE was able to prioritize the Coast Guard’s workload and help them get back on track.

“We had three or four artisans out of our paint stripping shop working on these parts as they came in, and a couple of engineers and I pitched in as well,” Gladson said. “The extra manpower assisted Coast Guard personnel in clearing the backlog in an efficient manner. We were really glad to be able to help.”

Workman and Gladson both said the benefits of cooperation between the Coast Guard and Navy depots go beyond a one-time project, as each facility can learn from the other.

“Recently, when we run into problems or try something new, I can reach out to the Materials and Processes Branch, and the FRC already has the procedures and has experienced what we’re experiencing,” Workman said. “The team has shared how they’re doing it and let us look at their local procedures.  Basically, it keeps us from having to start over from scratch by seeing what’s working for them.”

Gladson agreed the relationship has been mutually beneficial. 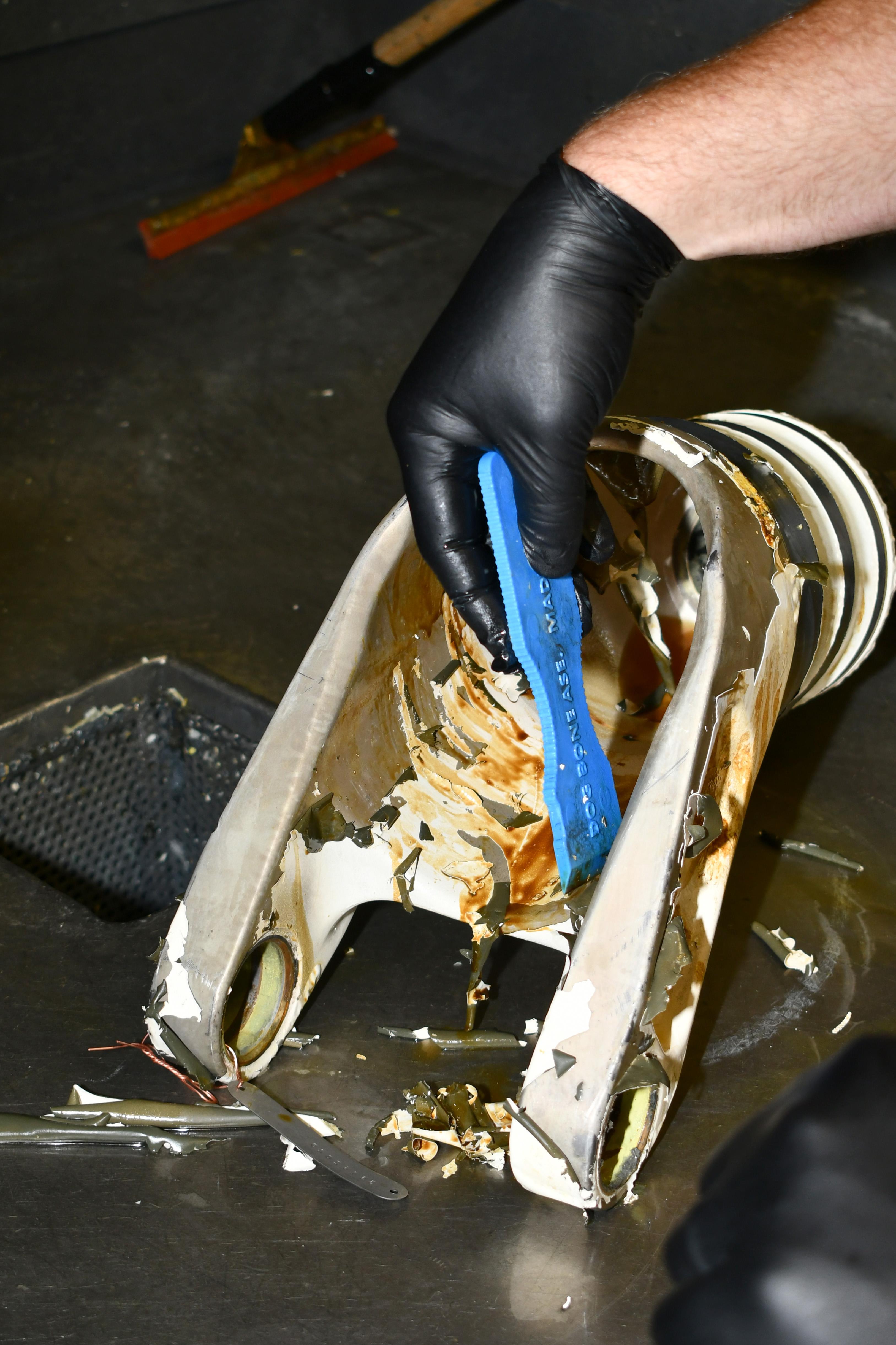 A sandblaster scrapes organic coatings from the pivot support assembly for an AV-8B Harrier. The part had been treated in FRCE’s heated chemical strip tank to loosen the part’s hard protective coating before it is inspected for cracks and defects.

James Bielamowicz, sandblaster in the FRCE small clean shop, cleans organic coatings from the shaft subassembly of a CH-53 helicopter. The part has been treated with a chemical stripping agent to remove organic coatings before it can be repaired. FRCE recently assisted the U.S. Coast Guard’s Aviation Logistics Center (ALC) in Elizabeth City, North Carolina, overcome a backlog of parts that needed to be chemically stripped.