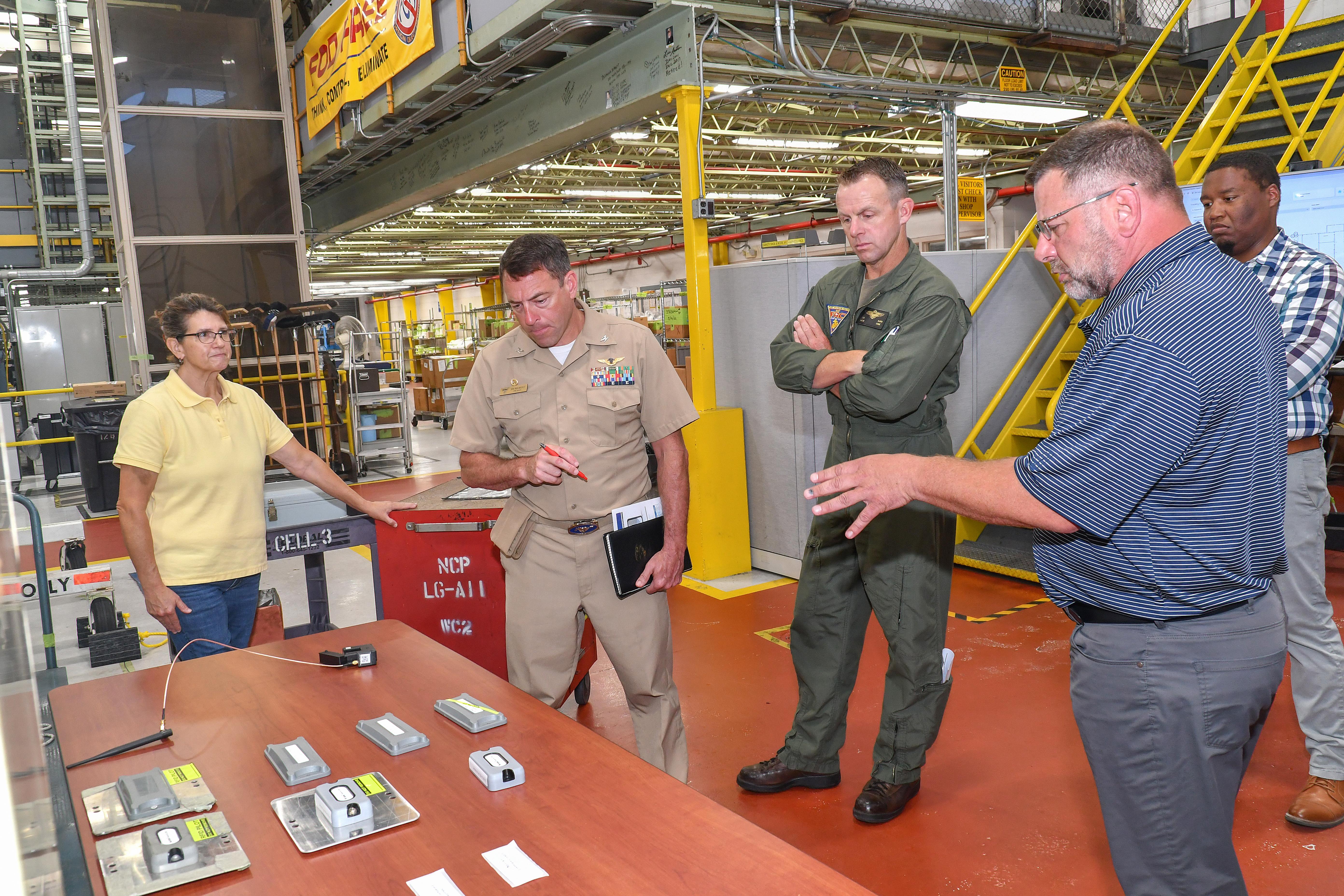 An effort to streamline and modernize the way Fleet Readiness Center East (FRCE) tracks tools, assets and inventory recently hit an important milestone.  FRCE’s digital tracking team, composed of a wide range of subject matter experts from within the depot’s workforce, recently demonstrated a successful proof of concept for a digital tracking system the team spent nearly 24 months developing and testing. Proponents say the system could boost efficiency and accountability within the depot’s workforce.

“We need to know where things are, know when we need them, and be able to get them in the hands of the artisans who perform the work on a day–to-day basis,” said Jamaine Clemmons, FRCE’s Advanced Technology and Innovation (ATI) Team lead. “This project ensures that we can have the best technology in place to do that.”

The digital tracking team harnessed the power of radio frequency identification (RFID) technology, which utilizes wireless radio frequency waves to automatically identify and track tags attached to objects. RFID tags can be affixed to an object and used to track tools, equipment, inventory, assets or other items.

In addition to RFID, the digital tracking team also evaluated the use of GPS and other technologies.

“We utilized a blended approach of technologies that included RFID location services as well GPS and smart sensors for facility health monitoring,” said Clemmons. “There can be limitations in regard to range or fidelity when using various types of tags or trackers, especially as it pertains to our application and within our existing infrastructure. The blended approach means using the right tech in the place where it’s needed to yield the desired results.”

During the evaluation of the digital tracking system, the team successfully tagged and tracked more than 1,000 items.

According to Robbie Puett, Support Equipment Engineering Branch head for Maintenance, Repair and Overhaul Engineering at FRCE, the mission of the depot requires a tracking system that goes beyond mere inventory. The team set out to develop a system capable of handling this vast amount of materials and items.

“From an asset or inventory management perspective, people often think of services like Amazon but we're not a warehouse type of facility,” said Puett. “We’re an aircraft maintenance, repair and overhaul facility. We have to track all the necessary materials and asset support equipment necessary for this this massive day-to-day operation.”

Joshua Paige, now a program analyst at FRCE, worked on the digital tracking project as a quality assurance specialist. He said the sheer numbers of items and assets at the depot seemed overwhelming at first.

“It's such a massive undertaking,” said Paige. “Imagine tracking the 5,000 toolboxes that FRCE has, let alone the tools inside them. We literally have millions of tools, more than 2.5 million. That number doesn't even include the support equipment like the generators or hydraulic test equipment. There are hundreds of thousands of assets and all of this has varying degrees of inventory interval.”

Clemmons said it became clear very quickly during the evaluation that the tracking system offered a time-saving method to locate tools or assets.

“One thing we noticed very early is that shop supervisors would leverage and utilize this technology on a daily basis,” said Clemmons. “There were multiple times throughout the demo and evaluation period where they came up and asked if we could locate an asset.”

While tracking assets items and inventory were key objectives when developing the system, the team approached the project with a much broader scope. Paige said automating and streamlining artisan compliance was another concept the team focused on. He explained that the digital tracking team demonstrated the ability to eliminate nearly 65 different paper forms related to compliance.

“A lot of folks look at software and figure out what it can do for them and then worry about the policy after the fact,” said Paige. “We went the other way. We took all the policy and compliance requirements and basically had them built into the tracking software at the beginning. Being able to look at emerging technology and then figure out how to implement that technology to empower and enable our artisans is one of the high points in my career.”

The digital tracking team also concentrated on critical factors such as safety and quality control during the project’s development. Maddison Dunton, an integrated quality engineer at FRCE, said that this focus on safety and quality influenced the development of other project areas such as capturing performance metrics.

“With the dashboard metrics, we really focused on making it useful for predictive maintenance on our assets,” said Dunton. “We could use it for understanding what assets we are going to need on the shop floor on a particular day. That plays into the safety and quality too, because if a person doesn’t have what they need, they can't do their job properly.”

Nancy Manning-Moore, a powered ground support equipment mechanic at FRCE, said one immediate benefit she witnessed is positive accountability for artisans in regards to tooling used on the shop floor.

“I can quickly see by this RFID system if a tool is not my tool,” said Manning-Moore. “This system will not only tell you who it belongs to, it will tell you what toolbox it belongs in and where. I can clearly see the potential this system has at the artisan level alone. Just knowing where our gear is at any given time – that's going to be a huge savings.”

Tad Sylivant, FRCE’s logistics lead, explained that the system isn’t limited to just tracking items within a separate system. It can also be incorporated into other domains like FRCE’s work order system.

“We had the vision up front to make sure we develop a system that we can build upon for other use cases,” said Sylivant. “You could start integrating this system into other systems and handle engineering instructions or work orders. This is something that will make us more efficient and it will save us money in the long run, but I think its potential to grow is even more important. There's unlimited potential here.”

Members of the digital tracking team said FRCE’s digital tracking system has already proven it can reduce labor costs associated with inventories and searches for tools and equipment. Others cited benefits such as increased efficiency and adherence to safety and compliance standards.

“We want the newer technologies that are foundational and that we can build upon in a scalable way,” said Burr. “By taking all of these different types of technologies, we can put the right amount of money into a business process and a business plan that makes the most amount of sense.”