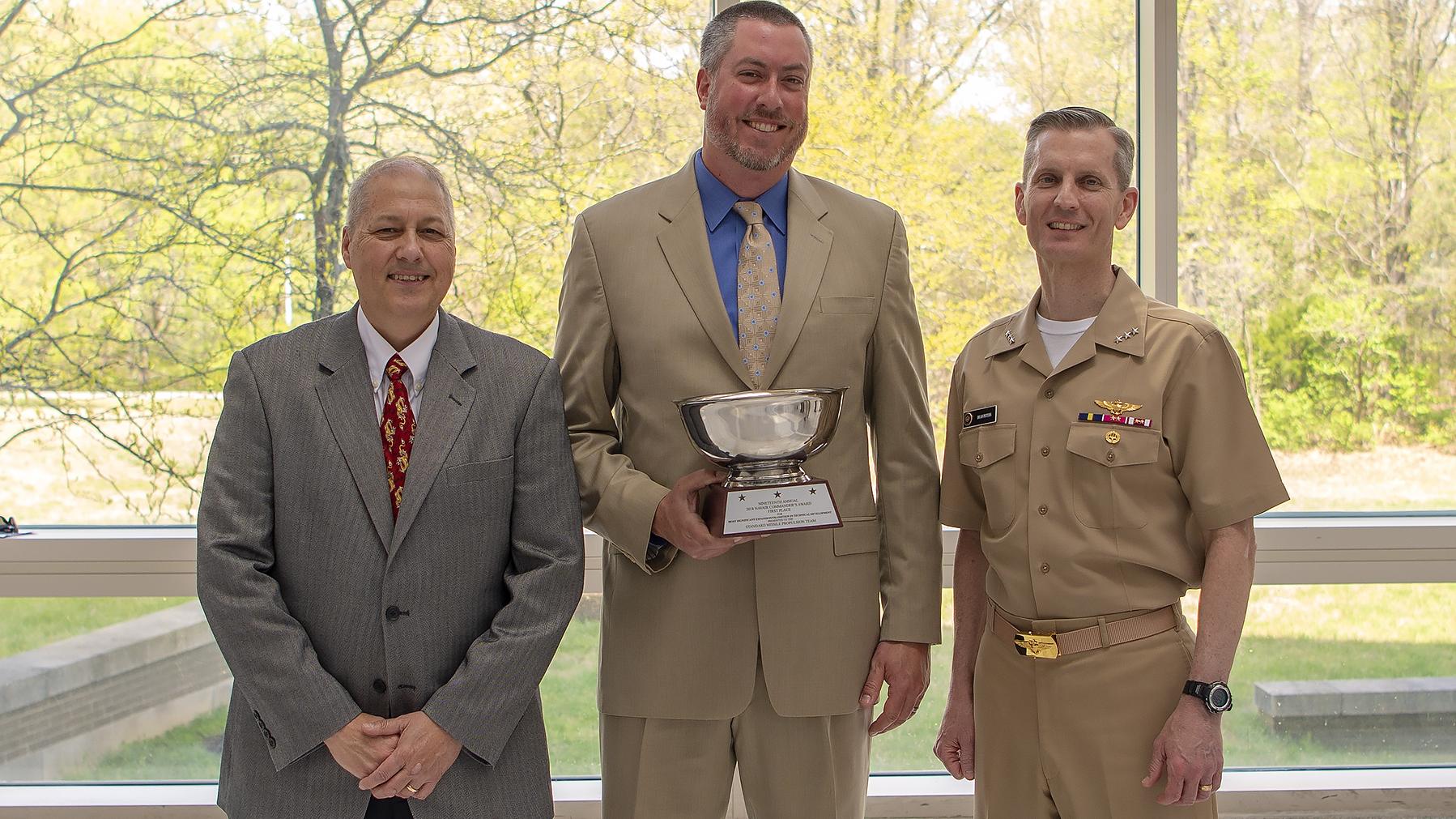 Of the 64 nominations submitted, the Standard Missile Propulsion Team at Naval Air Warfare Center Weapons Division was honored with a NAVAIR Commander’s Award during a ceremony April 17 in Patuxent River, Maryland.

The 19th annual awards honored teams and individuals across Naval Air Systems Command in nine categories aligned directly to imperatives within the NAVAIR Commander’s Intent. The China Lake team took home the award for Most Significant Expansion/Transition in Technical Development, which signified the importance of delivering new capabilities with increased speed.

“These teams are not being recognized because they did the same thing that we always did and just did it faster,” said Vice Adm. Dean Peters, NAVAIR commander. “There’s an important part of dedication that we don’t want to lose sight of, but this is about actually finding a better way. That’s how you make significant advances in speed.”

The Standard Missile Propulsion Team was asked to develop an increased capability for the Standard Missile 6 program and committed to the development of a new rocket motor using an organic and emergent China Lake technology that could offer tactical advantages and design flexibility.

“One of our first thoughts was that this is a perfect opportunity to demonstrate a NAVAIR/China Lake technology that we had been working on and maturing for the last several years,” said Martin Minthorn, a team lead and NAWCWD senior engineer. “Everything came together at the perfect place and time and we felt confident we could respond.”

According to the team’s nomination, the team designed, fabricated and successfully tested the new rocket motor in about eight months. It also noted that, “the technical expertise and agile nature of the team, combined with a ‘perfect storm’ of often rare, but absolutely necessary, support elements were all present for this effort...” Among those elements were decision-making authority and empowerment, agile staffing, and an aggressive risk management and acceptance approach.

“The requirements development was another area where we accelerated quite a bit,” said Keith Gray, team lead and chief engineer of the SM Technical Project Office at NAWCWD, “and that involved going and finding the right people.”

Both Gray and Minthorn agreed that having a team that works well together, has in-house knowledge, and clear objectives was significant to the success of the project. However, having sponsor and leadership support that empowered them to get the job done was key as well.

“We do have established processes that can sometimes seem burdensome, but they’re there for a reason,” Gray said. “We really need to work with the various organizations that govern how we do business and say, ‘How can I tailor this to go faster and find increased efficiency given that those processes aren’t going away and are there to provide value?’”

Rear Adm. Scott Dillon, NAWCWD commander, was on hand to celebrate locally with the team members in support of Gray and Minthorn, who travelled to the ceremony to accept the award on their behalf.

For the team, their motivation is less about awards or visibility, but on a focus on the warfighter.

“We really appreciate the recognition,” Minthorn said. “Getting capability to the warfighter, that’s our ultimate reward.”

Read about the Commander's Awards at http://www.navair.navy.mil/news/Annual-Commanders-Awards-celebrate-readiness-speed/Thu-04182019-1428

Members of the Standard Missile Propulsion Team at Naval Air Warfare Center Weapons Division are joined by Dan Carreño, front left, director of the NAWCWD Weapons and Energetics Department, and Rear Adm. Scott Dillon, NAWCWD commander, as they support their teammates from China Lake during a VTC broadcast of the NAVAIR Commander’s Award ceremony on April 17 in Patuxent River, Maryland. (U.S. Navy photo by Paul Kakert)