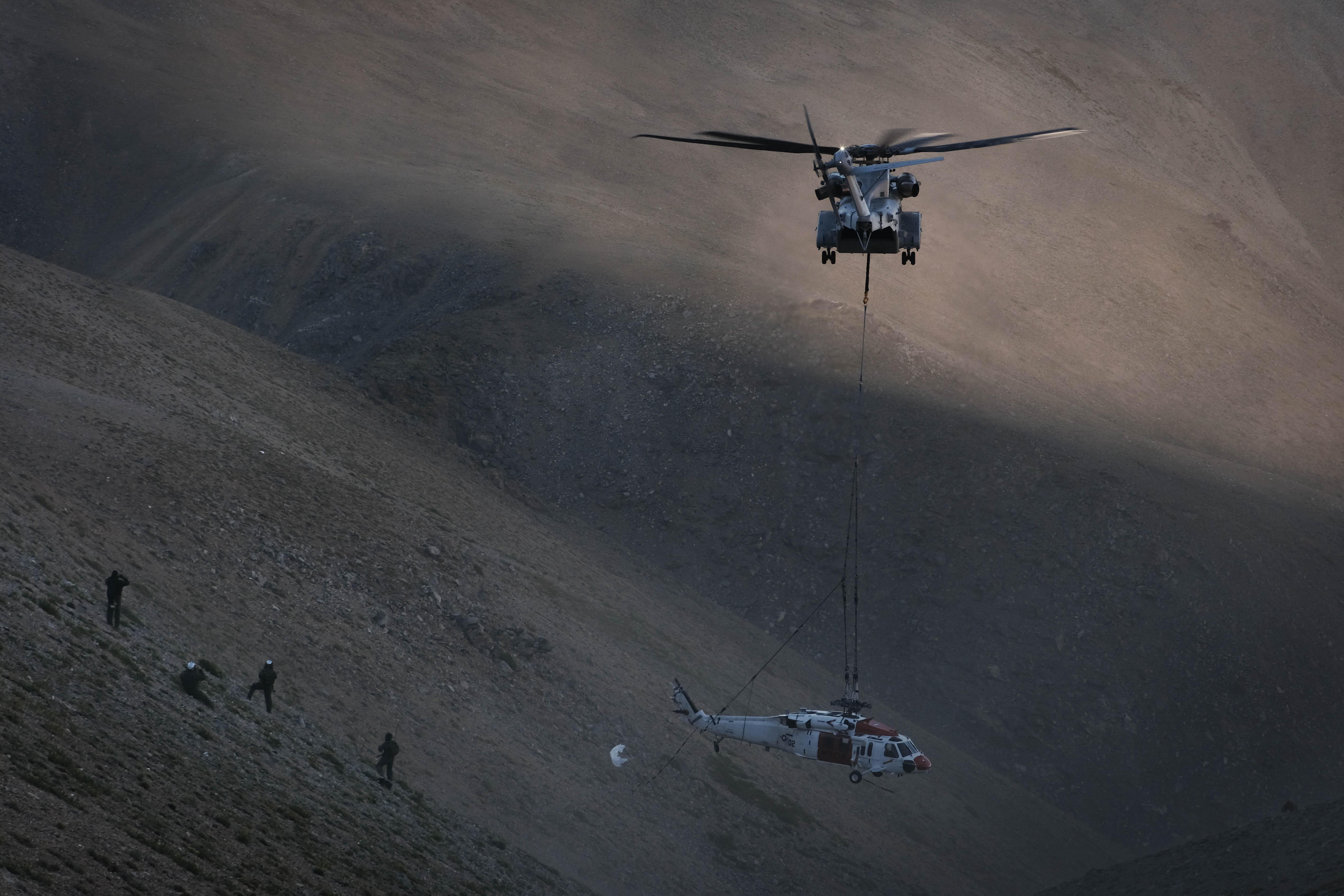 A Marine Corps CH-53K King Stallion lifts a Navy MH-60S Knighthawk helicopter from a draw in Mount Hogue, California, Sept. 5, 2021. The Knighthawk conducted a hard landing during a search-and-rescue mission, which resulted in no casualties or injuries of its crew. The two-day operation was the first official fleet mission for the CH-53K King Stallion, as it is currently undergoing an operational assessment while the Marine Corps modernizes and prepares to respond globally to emerging crises or contingencies. (U.S. Marine Corps photo by Cpl. Therese Edwards)

The CH-53K King Stallion successfully recovered a Navy MH-60S Knighthawk helicopter from Mount Hogue in the White Mountains of California on Sunday, September 5. The two-day operation was the first official fleet mission for the Marine Corps’ new heavy lift capability, which is in the midst of Initial Operational Test and Evaluation with Marine Operational Test and Evaluation Squadron One (VMX-1) at Marine Corps Air Ground Combat Center Twentynine Palms, Ca.

“VMX-1 received a request for assistance from the Naval Safety Center about an MH-60S Knighthawk that suffered a hard landing near Mt. Hogue, Ca., at an elevation of 12,000’ Mean Sea Level (MSL) in July,” said LtCol Luke Frank, CH-53K Detachment Officer in Charge for VMX-1.

The MH-60S Knighthawk was sitting on a high altitude ridge in very rugged terrain near the California-Nevada line on July 16 following a hard landing. The helicopter was supporting a search and rescue effort for a lost hiker. All four crewmembers survived without injury and were rescued the following day.

According to Frank, both the MH-60S unit and the Naval Safety Center had exhausted all other resources for recovery, including Army National Guard, Navy and Marine Corps fleet squadrons. “They all lacked the capability to lift the aircraft without an extensive disassembly,” he said.

VMX-1’s CH-53K detachment quickly examined the environmental conditions and conducted a quick feasibility assessment of support and determined that the CH-53K could conduct the lift. The CH-53K fulfills the heavy lift mission of the Marine Corps as it greatly expands the fleet’s ability to move equipment and personnel throughout its area of operations.

“After two weeks of exhaustive planning and assembling a team of more than 25 Marines and sailors from VMX-1 and 1st Landing Support Battalion from Camp Pendleton, Ca. we deployed two CH-53Ks to Bishop, Ca., and got to work,” he said.

The CH-53K was designed to lift nearly 14 tons (27,000 lbs) at a mission radius of 110 nautical miles in high and hot environments; a capability that expands the service’s range in supporting joint and coalition forces against potential adversaries.

The MH-60S weighed approximately 15,200 lbs. and was positioned in a tight ravine at nearly 12,000’ MSL and needed to be transported over 23 nautical miles to the Bishop, Ca. airport.

“After six months of flight operations with the CH-53K, the detachment had every confidence in the aircraft’s abilities to conduct the mission safely. Our main concern was the environmental factors ground support personnel would have to endure,” said Frank.

“This is exactly what the K is made to do,” he said. “Heavy lift is a unique and invaluable mission for the Marine Corps. Horsepower is our weapon system and the CH-53K is armed to the teeth. The entire team of Marines at VMX-1, 1st Landing Support Battalion, and NAS Fallon Search and Rescue were extremely motivated to execute this mission and we are all very proud to have completed this one flawlessly. To be the first group of professionals to complete a real-world, heavy lift/high altitude mission in support of a unit who thought all options were off the table is extremely rewarding,” said Frank. “This is sure to be the first of what will be many, many successful missions for this aircraft and for heavy lift squadrons.” 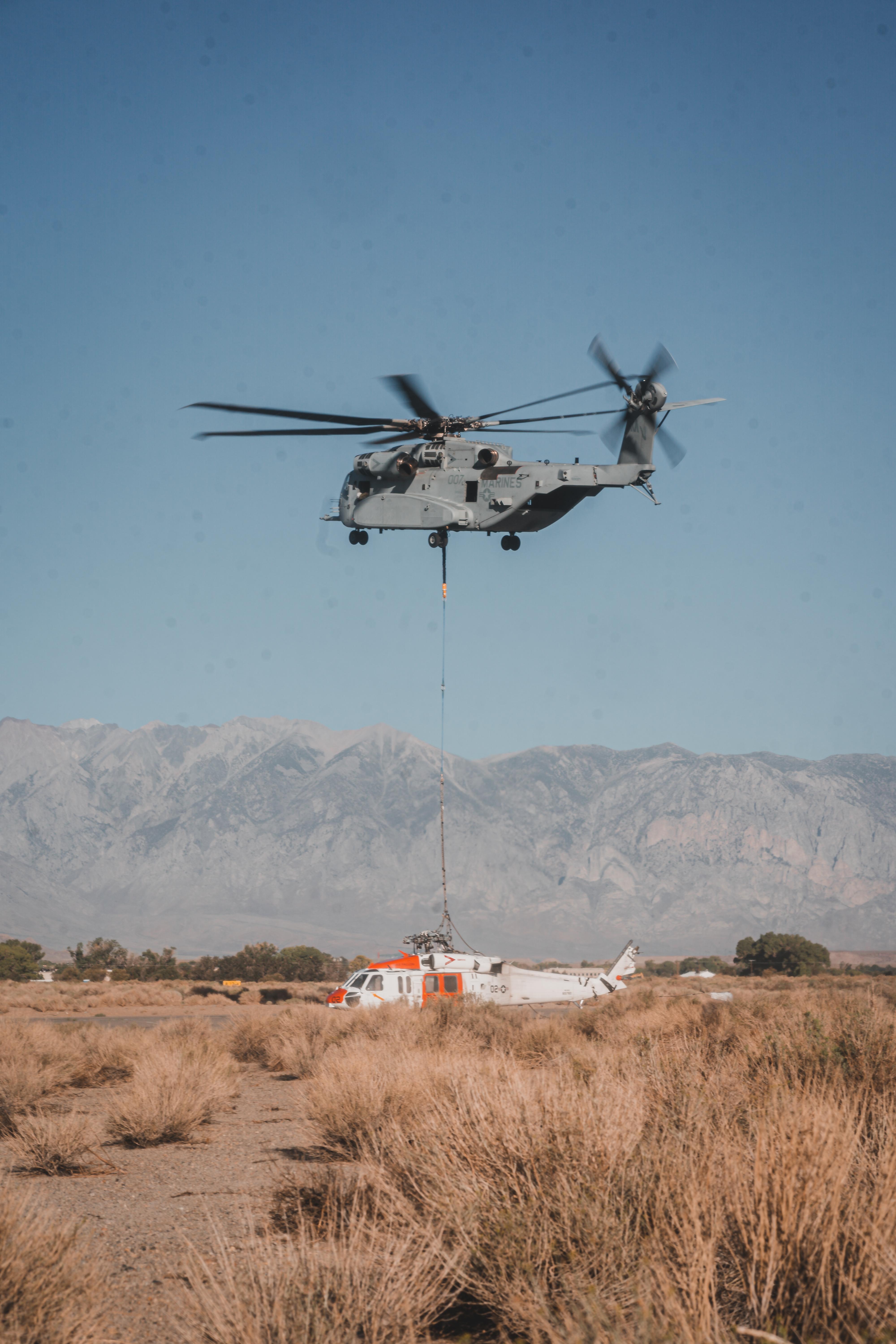 A Marine Corps CH-53K King Stallion lowers a Navy MH-60S Knighthawk helicopter to the ground after recovering it from the nearby mountain ranges after it conducted a hard landing near, Bishop, California, Sept. 5, 2021. The two-day operation was the first official fleet mission for the CH-53K King Stallion, as it is currently undergoing an operational assessment while the Marine Corps modernizes and prepares to respond globally to emerging crises or contingencies. (U.S. Marine Corps photo by Lance Cpl. Colton Brownlee)