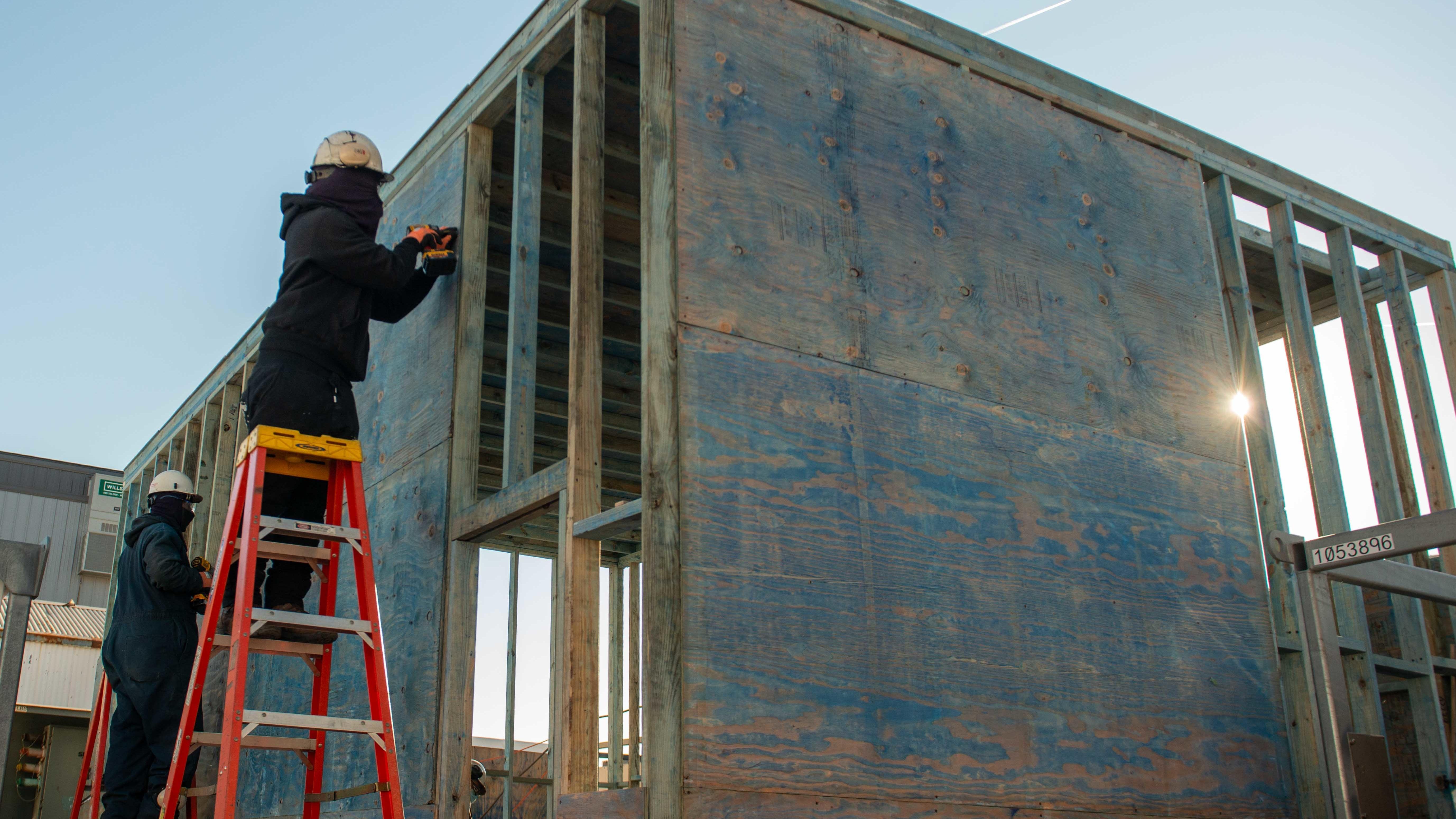 Newport News Shipbuilding contractors, put up walls for a temporary elevator structure aboard the aircraft carrier USS John C. Stennis (CVN 74), in Newport News, Virginia, Feb. 15, 2022. The John C. Stennis is in Newport News Shipyard working alongside NNS, NAVSEA and contractors conducting Refueling and Complex Overhaul as part of the mission to deliver the warship back in the fight, on time and on budget, to resume its duty of defending the United States.

ALRE is working to improve Nimitz-class carrier support by making holistic changes to the way all launch and recovery products and systems are tracked and planned.

By reexamining relationships with external ALRE stakeholders and ship availability schedules, product teams are improving scheduling and embracing new rigor in getting parts, services, and systems to the warfighter when and where they’re needed.

“We’re committed to seeing our products through from the start to the end of their availability,” said Joe Hader, PMA-251 deputy program manager for Nimitz-class and Air Capable Ships. “ALRE products touch many parts of our carriers, and we’re committed to keeping a higher level of ownership and oversight to ensure progress.”

“CVN-73 is a good example; we identified a baseline, and made sure we truly understood our systems’ interdependencies, as well as the dependencies our systems have on other programs, and we worked from there,” said Hader. “This information is synopsized weekly and disseminated to various stakeholders such as PMA-251, In-Service Aircraft Carrier Program (PMS-312), Naval Air Warfare Center Aircraft Division Lakehurst, shipbuilding supervisors, and Type Commanders.”

One of the systems Hader’s team analyzed is the ship’s ADMACS system, which interfaces with all other ALRE systems and depends on communication and coordination to succeed. Establishing CVN-73’s baseline helped the team plan more efficiently for USS John Stennis (CVN-74) before it started its Refueling Complex Overhaul (RCOH).

“We’re taking everything we did for CVN-73 and applying it to CVN-74, so we can proactively manage what’s going on now and in the future and identify when we can help before it’s urgent,” Hader explained. “This experience will be particularly useful for CVN-74, as its planned availability is only four years, rather than five. We will collaboratively manage some of the other smaller, yet still critical, availabilities such as Drydocking Planned Incremental Availability, Planned Incremental Availability, and Selected Restricted Availability. We have started to stand those efforts up.”

Examples of the new planning and tracking success are beginning to emerge. Recently, CVN-73 faced difficulties in acquiring valves from their overhaul contractor in a timely manner. While Leslie valves are not a PMA-251 configuration item, they are critical to production work and steam catapult functionality. ALRE collaborated with PMS-312 leadership, the contractor, and other stakeholders to get the valves delivered and meet critical ship milestones.

In another example, during CVN-73 overhaul, the ship’s teams realized several hundred parts were out of place when reinstalling the arresting gear and ARC systems. ALRE cooperated with stakeholders to identify the necessary parts and their due dates. By the end of May 2022, they ensured delivery of all essential components to CVN-73, and the project stayed on track to complete with no impact to critical path.

Hader and his team expect the change in operations to help with carrier product installations and maintenance, no matter how schedules may shift in an uncertain global security environment.