The U.S. Navy’s P-8A Poseidon takes flight just off the coast of Naval Air Station Patuxent River during testing of an enhanced Search and Rescue (SAR) kit. The improved SAR capability increases the survivor assistance capability of the P-8A from 16 to 100 people in a single sortie. Those rescued would have food, water and communications for an extended time until rescue. Recently, P-8A Poseidon aircraft from Patrol Squadron (VP) 5, the “Mad Foxes" located a vessel Sep. 14, missing nearly a week; the passengers were successfully rescued. (U.S. Navy photo/Released)

Flying at a maximum speed of about 565 mph, at about 41,000 feet, the U.S. Navy’s P-8A Poseidon already covers an operational area of about 1,200 nautical miles during a four-hour on-station period. Now, add air-to-air refueling for extended range and endurance and an advanced search and rescue kit and officials say the P-8A is postured to respond to humanitarian missions around the globe. “The UNIPAC III Search and Rescue (SAR) kit is designed to substantially increase survivor assistance,” said Squadron Leader Nathan Mula, an Australian P-8A Flight Test Tactical officer stationed at Naval Air Station Patuxent River (PAX) in Maryland. Mula is part of the cooperative program at the Maritime Patrol and Reconnaissance Office (PMA-290). “The kit increases the survivor assistance capability of the P-8A from 16 to 100 people in a single sortie.”

The testing, which is performed at PAX, but funded by the Royal Australian Air Force (RAAF) ensures those rescued are found and sustained with food, water and communications for an extended time. “The test program is a perfect example of the benefits reaped when two international partners join as part of a cooperative partnership,” Mula said. “Not only does the RAAF take a large step toward a major capability milestone, but the U.S. Navy receives the developmental and operational test experience and results.”

“By leveraging the developmental experience, both countries are able to increase their capability to provide assistance to survivors in the oceans around the world,” he said.

Operated by U.S Navy, Australia and India, the P-8 is performing maritime patrol and reconnaissance operations around the globe. Additionally, the United Kingdom, Norway, New Zealand and South Korea have ordered the aircraft with deliveries expected through the middle of the next decade.

The aircraft has proven valuable at search and rescue in addition to its core capabilities in maritime patrol, reconnaissance, intelligence and surveillance.

Some missions supported by the P-8A include operations to find the downed Malaysian airliner in 2014; and the rescue of castaways in 2016 when their large “Help” sign constructed from palm leaves stood out against the sands on Fanadik Island. In 2018, three fishermen were rescued in the South Pacific by a U.S. Navy Squadron with the help of UNIPAC-II SAR kit, the predecessor to the UNIPAC-III, which was the first time the U.S. Navy employed the system.

“It’s rewarding knowing we are providing the RAAF with the capability to rescue 100 survivors from a single P-8A.  It’s incredible,” she said.

“The RAAF will perform additional operational testing in Australia later in the year, said RAAF Squadron Leader Lee McDowall. “It means a lot to us for the U.S. Navy to trust our specialists to perform the testing to their same standard.”

The RAAF monitors a region spanning from the Indian Ocean across to the Pacific and down to Antarctica, which equals approximately 10 percent of the earth’s entire surface, McDowall said.“We have an excellent working relationship as integrated members of the program office and as cooperative partners in the P-8A acquisition process,” he said.

The U.S. Navy will evaluate the UNIPAC-III for its own fleet, and will use outcomes from the RAAF’s operational tests to consider the potential introduction of the capability.

“There’s no other rescue capability like it in the world,” McDowall said. 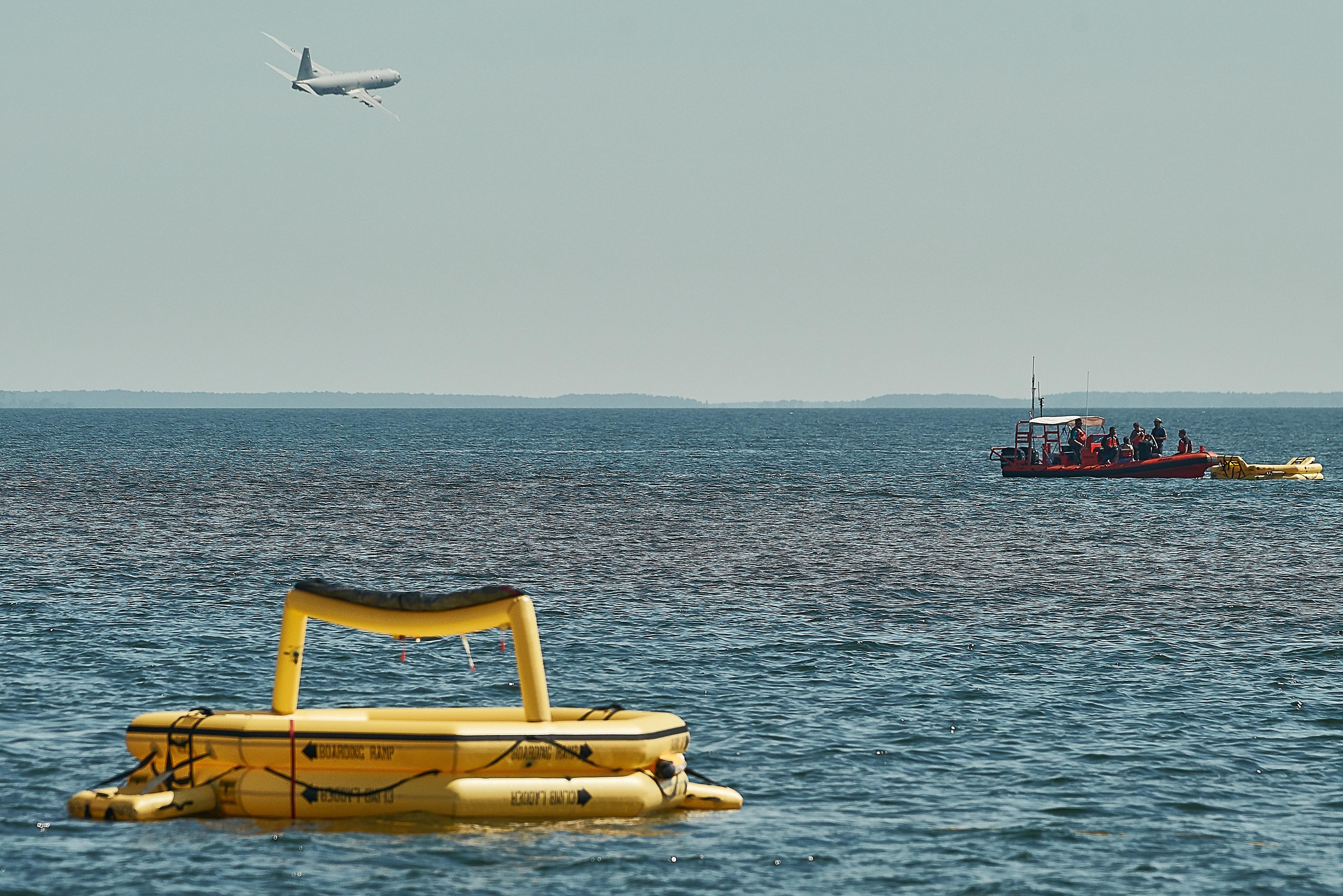 During testing there were both ground and flight tests, which included static ejection, safe separation and integration programs to certify the UNIPAC-III the Search and Rescue. During this test, testers evaluate the SAR kit [includes raft, food rations and drinking water], is studied approximately five miles off the coast of the Naval Air Station Patuxent River. (U.S. Navy photo/ Released)