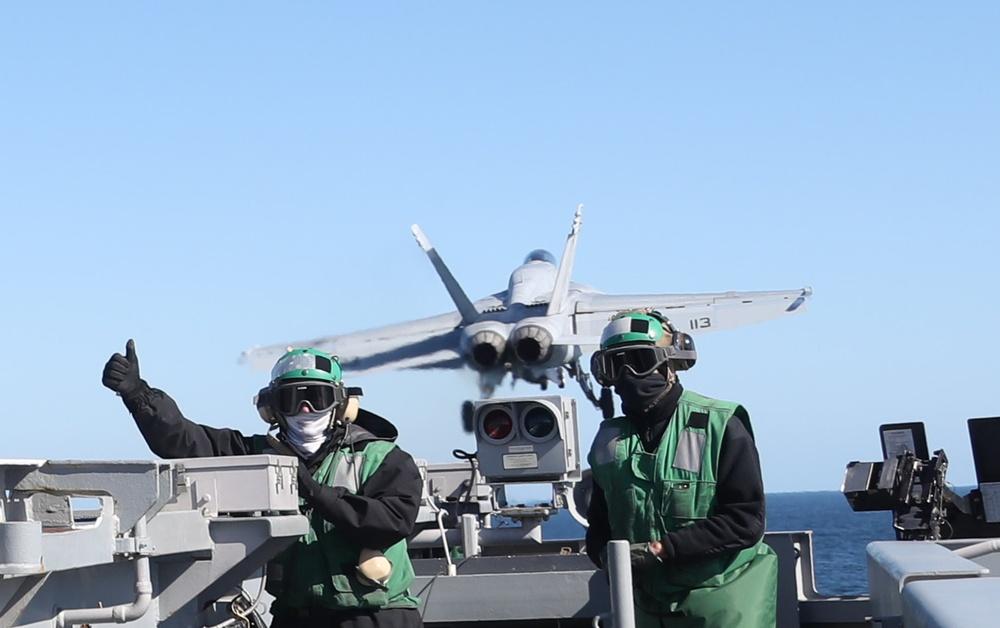 Imagine landing a fighter jet at 150 miles per hour on a small runway bobbing in the middle of the ocean – with only one engine. Thanks to the Navy’s latest version of the Precision Landing Mode (PLM), landing in this extremely challenging scenario is now much safer and easier.

Delivered to the fleet last October, the latest upgrade of PLM allows pilots to use the technology even under failure conditions. This was not possible with the earlier version released in 2016. FA-18E/F and EA-18G Military Class Desk Cmdr. Luke Davis describes how the newest iteration could be helpful in an emergency like an engine fire.

Aside from its enhancements to aircraft landings, PLM has also changed the way the fleet trains. New pilots for the F/A-18 E and F Super Hornet and EA-18G Growler now train with PLM from day one. Additionally, air wings take this capability on carrier qualification deployments, reducing training requirements by up to 50%. PLM enables aircrew to maximize flight time to train for a diverse and ever-expanding assortment of tactical and strategic missions.

From fiction to the flight line

So, how did this game-changing capability go from fiction to the flight line?

Formally called the Maritime Augmented Guidance with Integrated Controls for Carrier Approach and Recovery Precision Enabling Technologies (MAGIC CARPET), engineers at the Naval Air Warfare Center, Aircraft Division developed the business case and concept of the new tool. They worked with the Office of Naval Research to bring this concept to life and prove its feasibility. According to F/A-18 A-D Deputy Program Manager Dave Howe, intense collaboration between stakeholders served as the linchpin for this effort.

“PMA-265, after discussions with the fleet and Air Boss, embraced the development and received funding for the PLM project in 2016. We formed a team of flight control experts and fostered relationships across NAVAIR [Naval Air Systems Command] and industry enabling the success of the PLM contract,” said Howe.

“Within NAVAIR, [Air Test and Evaluation Squadron] VX-23 pilots along with flight controls engineers were the Navy's bread and butter. We also worked hand-in-hand with our industry partners to tackle acquisition challenges. The ability to reduce training and increase readiness by decreasing aircraft landings took precedence. Together, we remained fleet focused,” he continued.

NAVAIR began fielding the upgraded PLM to the F/A-18E/F and EA-18G fleet in fall of 2020. Howe said hearing how Navy pilots are using the newest PLM to safely land motivates him in his daily tasks.

“The warfighters are why we come to work every day. Our teams want the ability to provide more products and solutions that assist in both training and mission execution,” said Howe. “Thinking innovatively and incorporating new technologies are part of our daily work.”