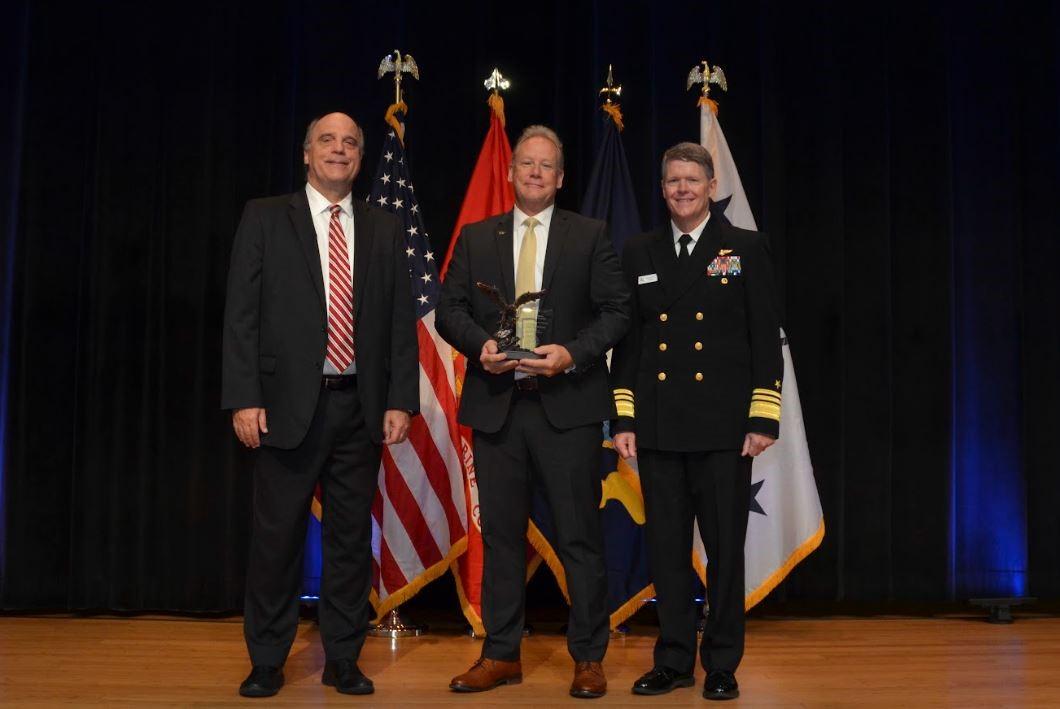 Performing the Duties of Assistant Secretary of the Navy for Research, Development and Acquisition (ASN RDA) Jay Stefany recognized the Specialized and Proven Aircraft Program Office’s (PMA-226) Principal Deputy Program Manager Andy Wilkinson with a Department of the Navy’s Acquisition Excellence Award for Acquisition Professional of the Year Nov. 3 at a ceremony held in the Pentagon. (U.S. Navy Photo)

The Specialized and Proven Aircraft program office’s (PMA-226) Principal Deputy Program Manager Andy Wilkinson received the Department of the Navy’s Acquisition Excellence Award for Acquisition Professional of the Year Nov.3 at a ceremony held in the Pentagon.

The Navy Acquisition Excellence Awards recognize individuals and organizations that have demonstrated excellent performance in the acquisition and sustainment of products and services for the Navy and Marine Corps.

Performing the Duties of Assistant Secretary of the Navy for Research, Development and Acquisition Jay Stefany presided over the ceremony and recognized the accomplishments of each individual, team and command awardee.

“The individuals winning these awards today are the Navy’s best leaders who possess the ability to build effective teams, employ instinctive ingenuity and use strong business acumen in their programs, allowing us to accomplish critical missions,” said Stefany.

“PMA-226 has and continues to dramatically increase capability across their portfolio, while increasing availability of Adversary Aircraft and all at minimal cost,” said Bob Kimble, who oversees the Program Executive Office for Aviation Common Systems and Commercial Services. “Andy’s leadership and expertise have been foundational to PMA-226's success and well deserving of this award.”

Wilkinson’s contributions to the PMA-226 adversary program resulted in increased readiness and capability. He guided the F-5 Adversary Aircraft team to develop a comprehensive, phased plan that included immediate capability, such as the Red Net System which replicates modern radar and other avionics at a cost of less than $20,000 per aircraft, while establishing future capability through updated avionics and safety upgrades on repatriated F-5 aircraft.

He structured one of NAVAIR’s first Other Transaction Authority (OTA) agreements for an F-5 cockpit upgrade, which was awarded to a non-traditional defense contractor and enabled the delivery of two modernized F-5 prototype aircraft. The OTA process took 12 months from the beginning of the process to award and resulted in a savings of $50 million.

Wilkinson laid the groundwork for the conversion and upgrade of 22 repatriated F-5 aircraft to a new Navy and Marine Corps standard with modern capability and increased safety. Finally, he restructured the phased depot maintenance approach and entered the F-5 into the Naval Sustainment System process two years ahead of schedule. These combined efforts are predicted to enable affordable, relevant air-to-air adversary capability into the 2030s.

“Andy fosters the best of out of each team member, driving each and every one of us to excel in our abilities to deliver products and services to the fleet,” said PMA-226 Program Manager Capt. Gregory Sutton. “I could not ask for a better partner in leading PMA-226.”

In addition to adversary improvements, Wilkinson also guided the CAS team through a significant expansion in capabilities while continuing PMA-226's leadership role in establishing CAS airworthiness standards. He identified an opportunity to pursue a competitive approach on aerial refueling for the first time in 20 years, reduced the cost to the F-35 program through production acceptance chase services, all while developing airworthiness standards in concert with NAVAIR airworthiness experts, the National Airworthiness Council, airworthiness representatives across services, and the Federal Aviation Administration, which are now being used as a basis for other joint service CAS efforts.

“I’m very fortunate to be surrounded by exceedingly innovative, capable, and committed teammates, great military leadership and a team bringing their best to the fight every day,” said Wilkinson. “That determination and culture of excellence is reflected in the products and services we deliver to the fleet.”