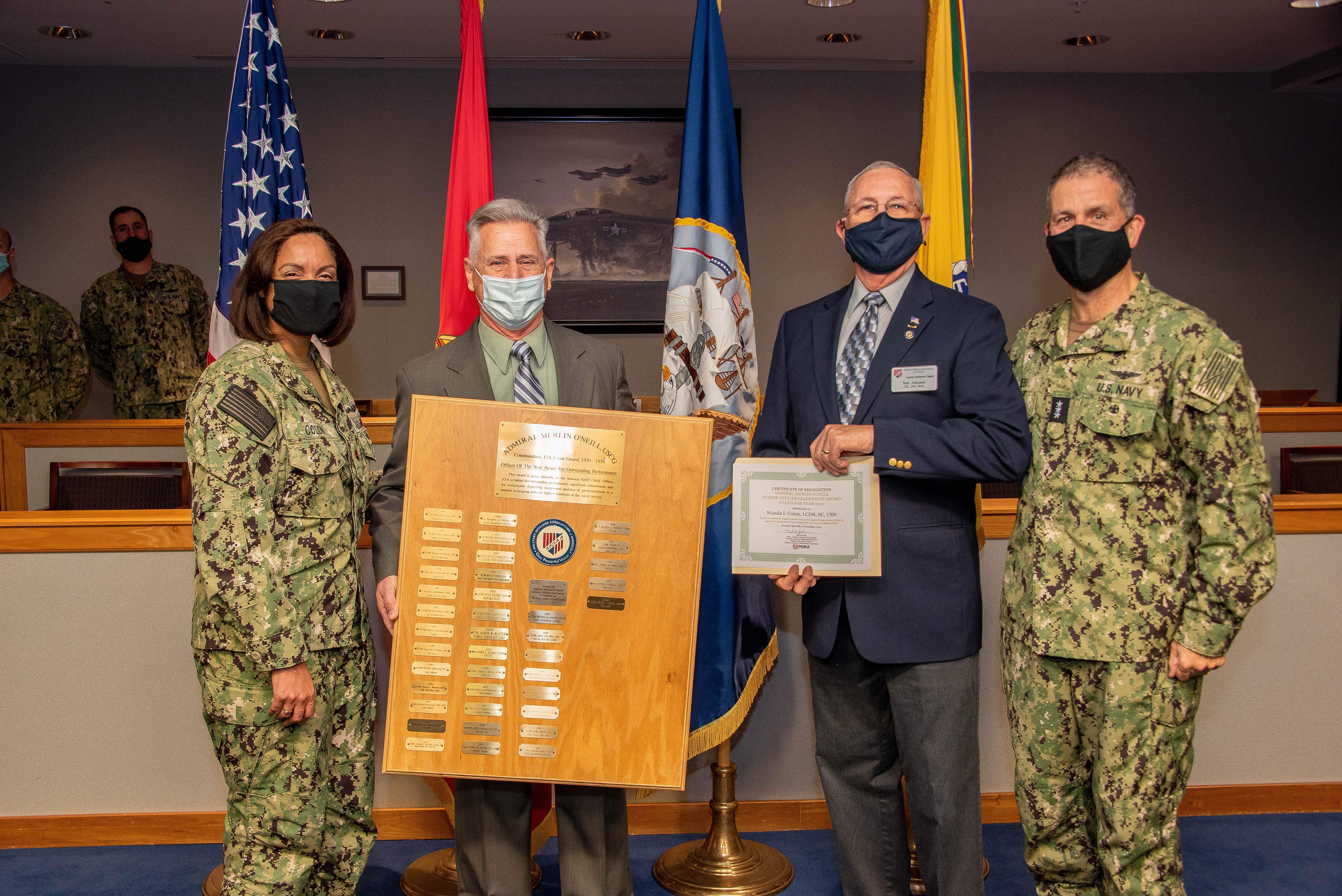 The award was established in 1981 by the Southern Maryland Chapter of Military Officers Association of America (MOAA) to recognize exemplary junior officers and is named in honor of Admiral Merlin O'Neill, Commandant of the Coast Guard from 1950 to 1954 and a prominent southern Maryland resident in his later years. O’Neill was a decorated veteran of World War II and known for taking a personal interest in the development of junior officers.

“The junior officers at Patuxent River are a force multiplier when it comes to supporting our mission here, and the Admiral Merlin O’Neill Officer of the Year Award is one way the Navy highlights the achievement of these steller leaders,” said Mr. Gary M. Kurtz, program executive officer, Aviation Common Systems and Commercial Services (PEO(CS)).

To be eligible, officers must be grade O-4 or below and may be from any service branch, to include U.S. Coast Guard, assigned to activities onboard Naval Air Station Patuxent River. Particular emphasis must be placed on sustained superior performance and leadership. The officer’s emphasis on volunteer activities and involvement in community service are important factors in selection.

As a leader, Colon actively manages more than $100 million in programmatic funds as a budget and financial manager at PMA-260, achieving a 99.9 percent obligation rate, surpassing Financial Management and Budget (FMB) benchmarks.

As the Naval Aviation Enterprise War Council operations officer, she was responsible for compiling all NAVAIR Direct War Overseas Contingency Operations requirements, ensuring these were included in the budget build and properly funded. Using lessons learned from the past, she identified and funded $803 million in direct war requirements for fiscal year 2022, providing critical support for down range warfighters.

“An exceptional representative of PMA-260, Colon is extremely intelligent, capable, and manages all tasking with wisdom beyond her rank; all key attributes of a superior Naval Officer. Her personal involvement, astute insight, and tremendous work ethic continue to make a positive impact in my command,” said Capt. Robert Burgess, PMA-260 program manager.

Colon is a parish member of the Immaculate Heart of Mary Catholic Church, where she dedicates volunteer hours assisting as a Spanish speaking interpreter for the Spanish speaking members of the congregation, serves as a server during Lent, and decorates her church in preparation for Christmas and Easter. She has participated in the “Clean the Bay” day, clearing NAS Patuxent River beaches of trash and debris that washed ashore, volunteers with the local chapter of Rebuilding Together, participating in “Christmas in April”, to rehabilitate the homes of low income families, focusing on elderly or disabled citizens of southern Maryland.