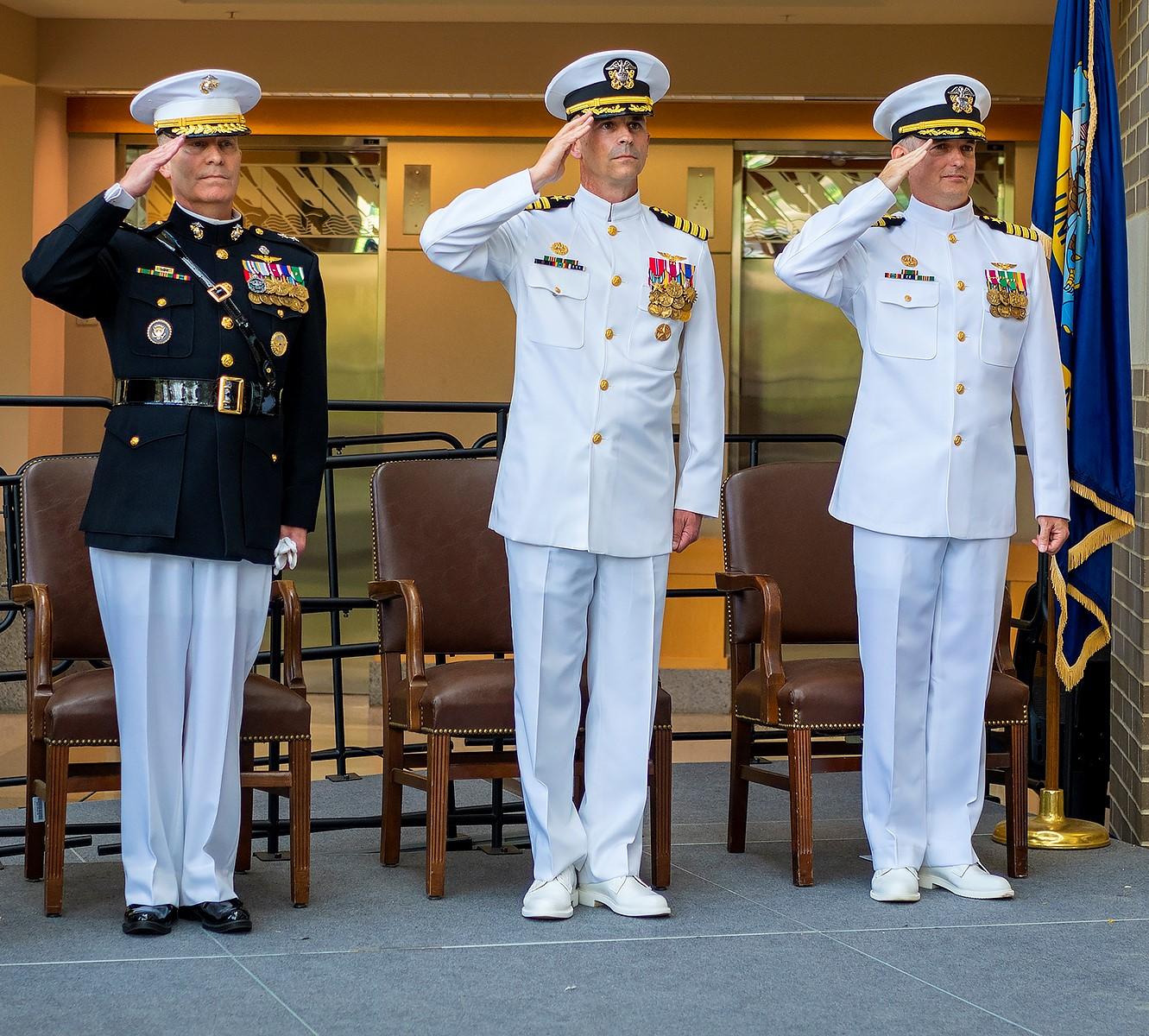 Capt. Dan Papp requested to go ashore for the last time in a retirement and change of command ceremony on June 2 surrounded by family, colleagues, and friends.

After three years as program manager for Air Anti-Submarine Warfare (ASW) Systems Program (PMA-264) and 27 years of dedicated service, Papp bid farewell to his colleagues and thanked his family with humble remarks as he welcomed new leadership, Capt. Dennis Lloyd.

Maj. Gen. Greg Masiello, Program Executive Officer for Air Anti-Submarine Warfare, Assault & Special Mission Programs, served as guest speaker at the ceremony where he commended Papp for his leadership, professionalism, and dedicated focus on the people during his time with the program.

“What I have learned from the science and professionalism of the men and women in PMA-264, and the extended [Commander, Patrol and Reconnaissance Group] family, to the profession of AWS, is remarkable, it is world class,” said Masiello. “The products that you [PMA-264] produce are what the sailors use every day.”

PMA-264 is responsible for the manufacturing and delivery of sonobuoys. They are air launched expendable, electro-mechanical ASW acoustic sensors designed to relay underwater sounds associated with ships and submarines to sophisticated remote processors principally on P-3C Orion, P-8A Poseidon, and MH-60R Seahawk aircraft.

Papp, a Chicago native, graduated with honors from Northern Illinois University. Following two years of enlisted Naval service, he received his commission through Officer Candidate School and was designated a naval flight officer in February 1998. Operationally, he served as the executive officer then commanding officer of Patrol Squadron (VP) 16, where his “War Eagles” successfully completed the first P-8A deployment and received the 2014 Captain Arnold Jay Isbell Trophy for ASW excellence. He completed several tours at NAVAIR and joined the Maritime Patrol and Reconnaissance Aircraft (MPRA) Program (PMA-290) as the P-8A current development and modification team lead following his command tour. In 2016, he served as the MQ-4C Triton integrated product team lead guiding the team through Milestone C, low-rate initial production, first fleet aircraft delivery as the program prepared for its early operational capability. Papp assumed command of PMA-264 in July 2019.

“To the team: you can take pride in knowing your work, quietly preformed, day in and day out is recognized by the fleet,” said Papp. “PMA-264 is fortunate to have you, Capt. Lloyd, at the helm.”

Lloyd is a graduate of the University of Texas at Austin, completing the Naval Reserve Officer Program and commissioning in August 1997. After attending undergraduate training at Training Squadron TEN and 86 (VT-10/VT-86) at Naval Air Station Pensacola, he was designated a naval flight officer in February 1999. His sea tours include two deployments with the Sea Control Squadron (VS) 24 in support of operations Southern Watch, Enduring Freedom, and Iraqi Freedom. He transitioned to the P-3C with deployments to several areas of responsibility

“Thank you for taking the time out of our busy day not only to recognize the Papp family’s service to our country but celebrate PMA-264 as a command and to recognize the incredible work this workforce does for the nation,” said Lloyd.

Lloyd comes most recently from PMA-290. He is a graduate of the Naval Test Pilot School completing multiple tours with Air Test and Evaluation Squadron TWO ZERO (VX-20). He served as a development test naval flight officer/project officer for a variety of P-3C avionics, sonobuoys, sensors, and mission systems, deputy government flight test director/mission systems lead for the P-8A, and as chief test pilot and commanding officer. He has accumulated over 3,000 flight hours and over 300 carrier landings in more than 20 type/model/series aircraft.

“To the men and women of PMA-264, this day is really for you,” remarked Lloyd. “I’m truly honored and humbled to get to be a part of this extremely talented team of dedicated individuals. We owe our best, all of us, each and every day to each other, our nation, our Navy, and most importantly to the sailors, airman, and Marines who we serve and who we must always have at the forefront of our thoughts and decisions.” 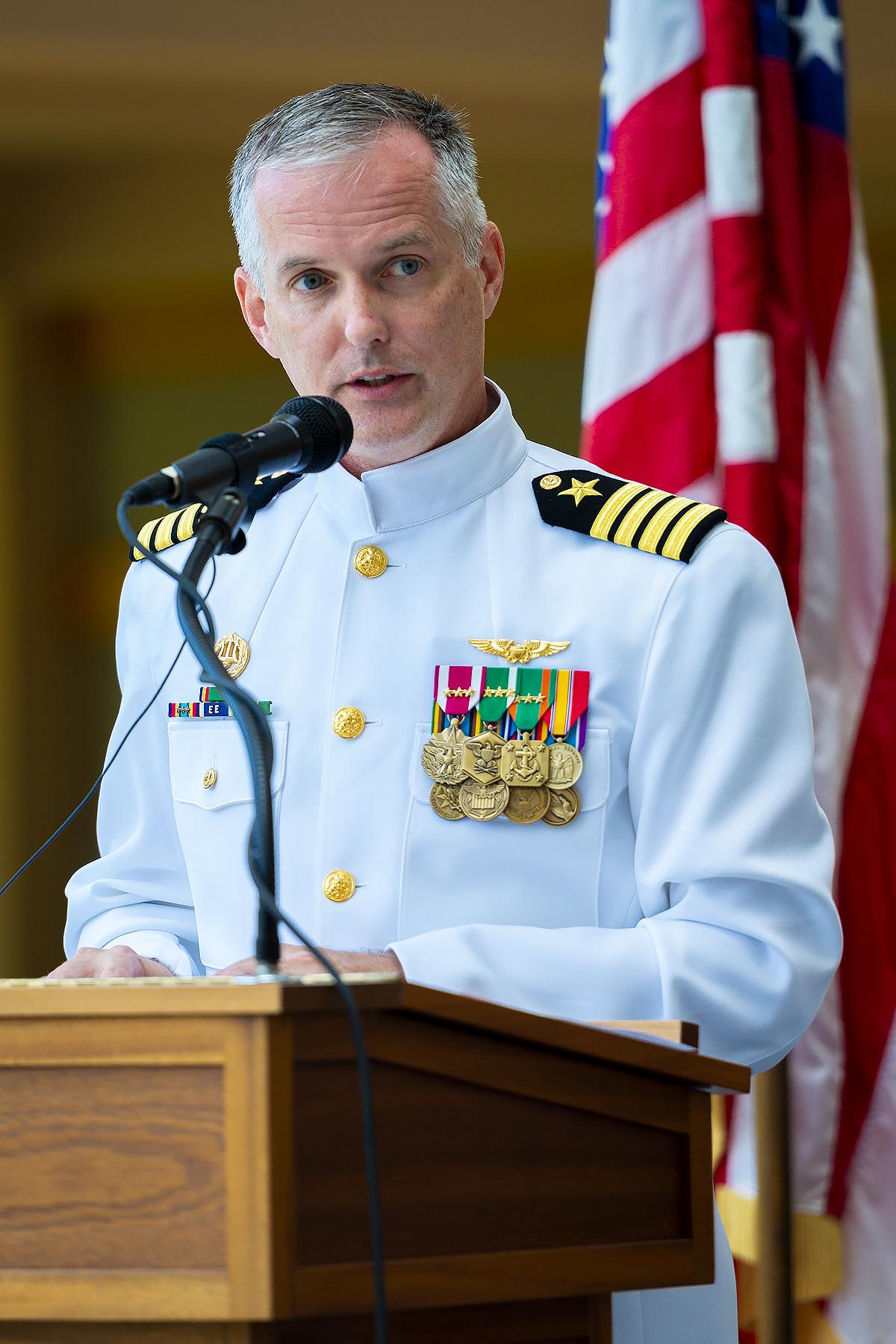 Capt. Dennis Lloyd addresses the crowd June 2 as he assumed command of PMA-264.