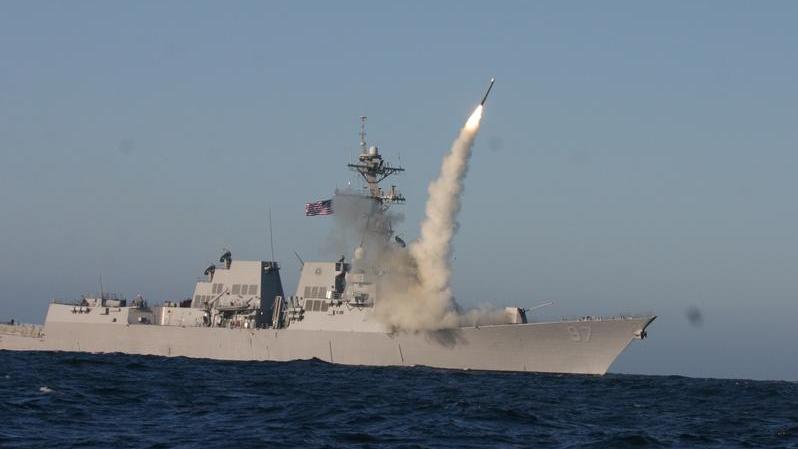 The Tomahawk Block III Conventional variant (TLAM-C) contains a 1,000-lb class blast/fragmentary unitary warhead while the Submunition variant (TLAM-D) includes a submunitions dispenser with combined effect bomblets. The Tomahawk Block IV (Tactical Tomahawk, TLAM-E), conventional variant, which entered the Fleet in 2004, adds the capability to reprogram the missile while in-flight via two-way satellite communications to strike any of 15 pre-programmed alternate targets or redirect the missile to any Global Positioning System (GPS) target coordinates.

The Block IV missile is capable of loitering over a target area in order to respond to emerging targets or, with its on-board camera, provide battle damage information to warfighting commanders. Tomahawk Block IV is currently in Full Rate Production (FRP). Block IV’s will require mid-life recertification beginning in FY19, increasing the capabilities and extending service life. During recertification, upgrades to navigation and communication systems will be completed. Plans for a maritime strike capability are in development, this enhancement would be executed concurrently with recertification.

Tomahawk provides on-scene commander with the flexibility to attack long-range fixed targets or support Special Operations Forces with a lethal, responsive, precision weapon system and as such has become the weapon of choice for the U.S. Department of Defense.

Tomahawk cruise missiles are designed to fly at extremely low altitudes at high subsonic speeds, and are piloted over an evasive route by several mission tailored guidance systems. The first operational use was in Operation Desert Storm, 1991, with immense success. Since January 1991, more than 2,000 Tomahawks have been fired in combat operations, including in 2011 during Operation Odyssey Dawn in Libya and in 2014 during Operation Inherent Resolve in Syria.