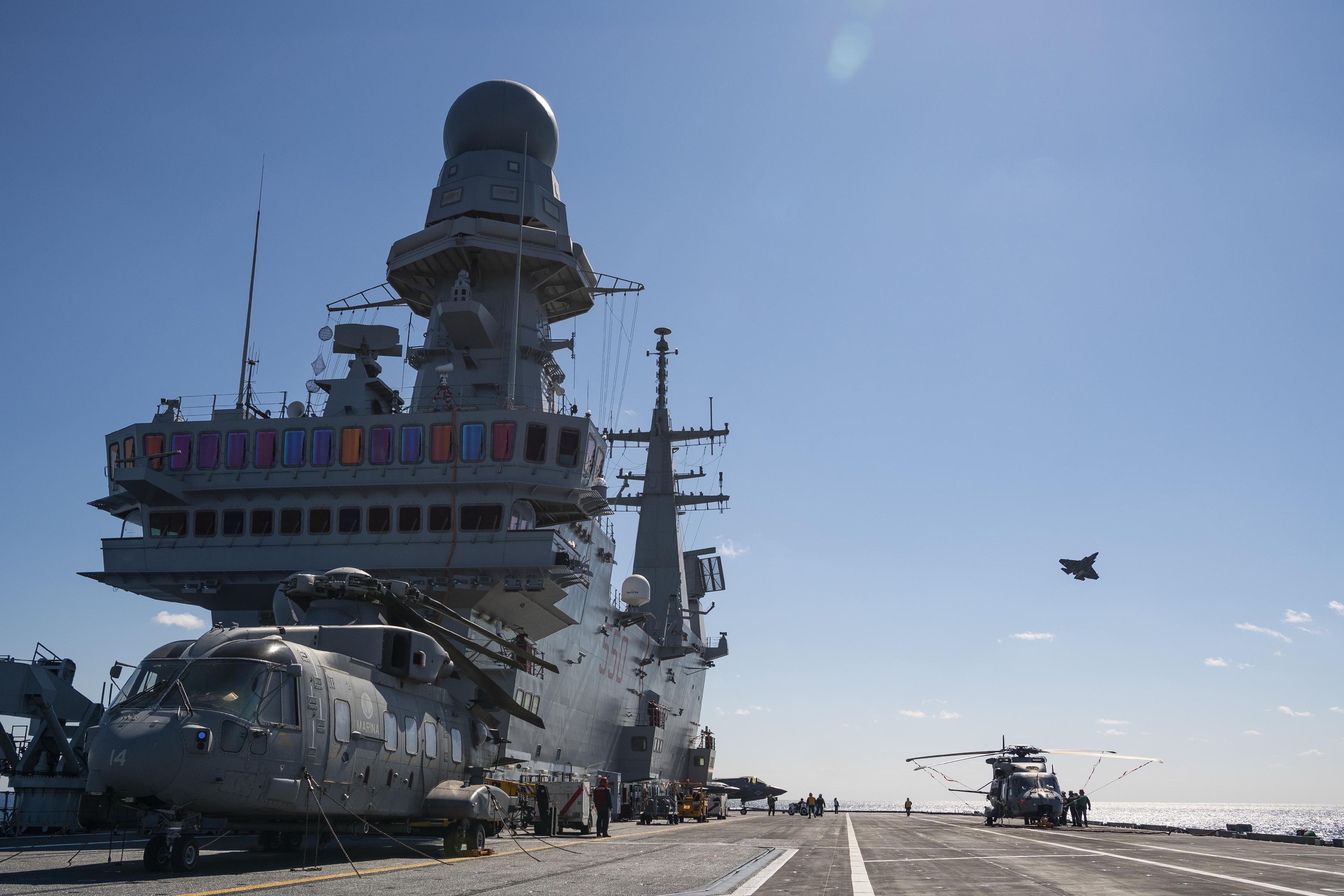 The flight deck crew casts no shadows; the low, dark cloud ceiling completely covers the sun. The aircraft marshaller, donned in a yellow life preserver, raises the bright orange collar of his Marina Militare jacket to shield his neck. Rain collects in the pad eyes (padeyes).

Some miles away, above the gray blanket, an F-35 pilot is preparing to recover aboard the currently out-of-sight rectangle of real estate that he is sure is below in the middle of a vast ocean.

Mother Nature is agnostic to the mission at hand or the platform employed. Naval aviators and air traffic controllers can’t afford to be neutral to the elements.

This notional scenario highlights the need for an instrument landing system, or ILS, that helps pilots and aircrews, and that are trustworthy for their accuracy.

The PMA-213 team, who work at Webster Outlying Field (WOLF), embarked in February under COVID-19 restrictions, and conducted their certification with the help of an F-35C that flew to the ship from Air Test and Evaluation Squadron (VX) 23.

Once underway, the PMA-213 team waited for a break in the ITF’s developmental flight testing to perform the PALS certification for the Joint Precision Approach Landing Systems (JPALS) and the SPN-41B instrument carrier landing system (ICLS).

NAWCAD ATC&LS Division’s Katie Prelog, team lead for the trip aboard Cavour, and Kevin Hinton and Jeanette Frisbey, NAWCAD ATC&LS technicians, said while underway their mission included a functional check of the system, running 11 different tests designed to check all operational capabilities. It also included aligning the system, which required an aircraft.

Prelog said with the successful completion of flight procedures for JPALS and SPN-41B on Cavour, “we are recommending to the ship that they certify both the JPALS and the SPN-41B systems.”

Following the certification, Winston sent a recommendation letter to Cavour’s leaders. The report contains a summary of results from the flight testing, and a recommendation for, among other items, when to have the system recertified.

“The incredible achievement of the entire team to get both of these systems certified on Cavour cannot be understated,” said Capt. Kevin, Watkins, PMA-213 program manager. “Facing the unprecedented lockdowns and travel restrictions posed by COVID 19 last year, our Navy team was forced to improvise to ensure the JPALS and ICLS systems were installed and checked out on Cavour before she sailed across the Atlantic [for 051250F-35B development flight tests off of the U.S. coast]. Developing and utilizing remote technical assistance and installation procedures successfully for the first time, especially on a first of type install on a coalition partners’ ship, was a result of our teams’ perseverance and the incredible collaboration with Italy’s shipyards.”

“This is critical to attaining international interoperability amongst the F-35 partner and customer nations, and paves the way for future sales of JPALS for use with other aircraft platforms and in other operational situations,” said Casey Edinger, PMA-213 International Programs deputy program manager.