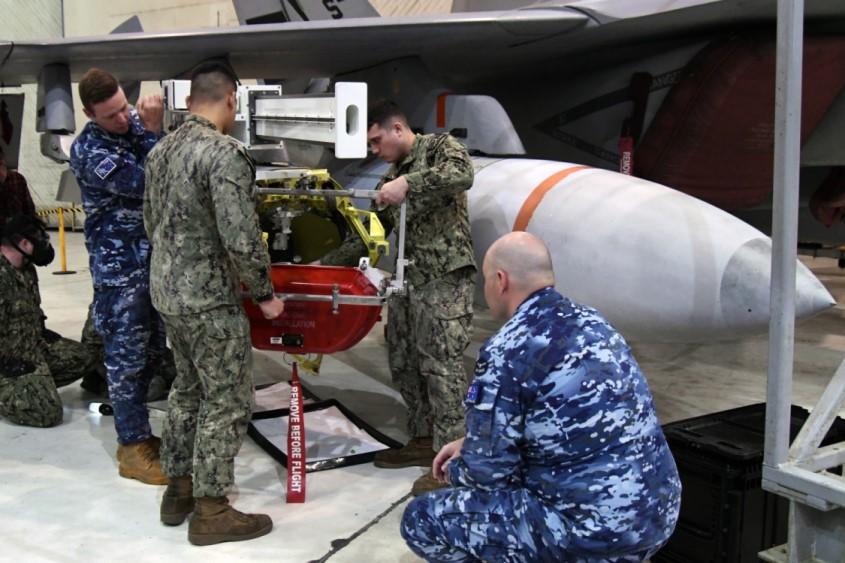 U.S. Navy (in green) and Royal Australian Air Force (in blue) fleet maintainers work on a Next Generation Jammer Mid-Band pod during a recent logistics demonstration held at Naval Air Station Patuxent River, Maryland. It was the first time the NGJ cooperative partners worked together as a maintenance team on the newest Airborne Electronic Attack weapons system for the EA-18G Growler. (U.S. Navy photo by Kristine Wilcox)

Five U.S. Navy Sailors and two Royal Australian Air Force (RAAF) airmen participated in a six-week training event in February and March with the AN/ALQ-249 Next Generation Jammer Mid-Band (NGJ-MB) pods that will be used on the EA-18G Growler aircraft.

During the demonstration, the fleet members performed critical maintenance tasks on the jamming pods. They were required to remove and reinstall 60 components, such as arrays, pumps, and actuators. The fleet maintainers also verified step-by-step procedures from the technical manuals and provided feedback to the government product support team.

This was the second logistics demo for the AEA Systems Program Office (PMA-234), but the first to include RAAF cooperative partners.

“It was great to have our RAAF airmen join us for this event,” said U.S. Navy Capt. David Rueter, PMA-234 program manager who oversees the NGJ-MB program. “Not only was it the first time the maintainers had access to the Mid-Band pods, but also the first time they worked together as a team, and it was seamless.”

RAAF Leading Aircraftmen Adrian Bailey said that while the two countries operate the same pods now, seeing how the U.S. Navy does things differently was eye-opening.

“It’s really invaluable for us Aussies to be here now, and while we won’t get the pods for a few years, we can take [the training] back and highlight the issues now, so we’re more prepared for it,” Bailey said. “It’s very different from how we operate the ALQ-99 pods and it’s good to get a head start.”

“We have two junior guys participating, and I expect they’ll be in the Navy for some time, so when the pods get to the fleet, these guys may be subject matter experts. Hopefully, the senior guys working on ALQ-99 pods will be leading the Mid-Band classes,” Cano said.

Danielle Raffa, PMA-234 Supportability Test and Evaluation lead, who coordinated the logistics demonstration, said conducting an exercise like this allows the teams to find and address any deficiencies before the final version of the pod gets to the fleet. She said they received great feedback from the maintainers and will use it to improve the pods.

“It’s been a really good opportunity,” Bailey said. “How many times do you bring out a new weapons system and they say, ‘let’s get the maintenance guys there first to see if they can improve it.’ I haven’t heard of that too many times.”