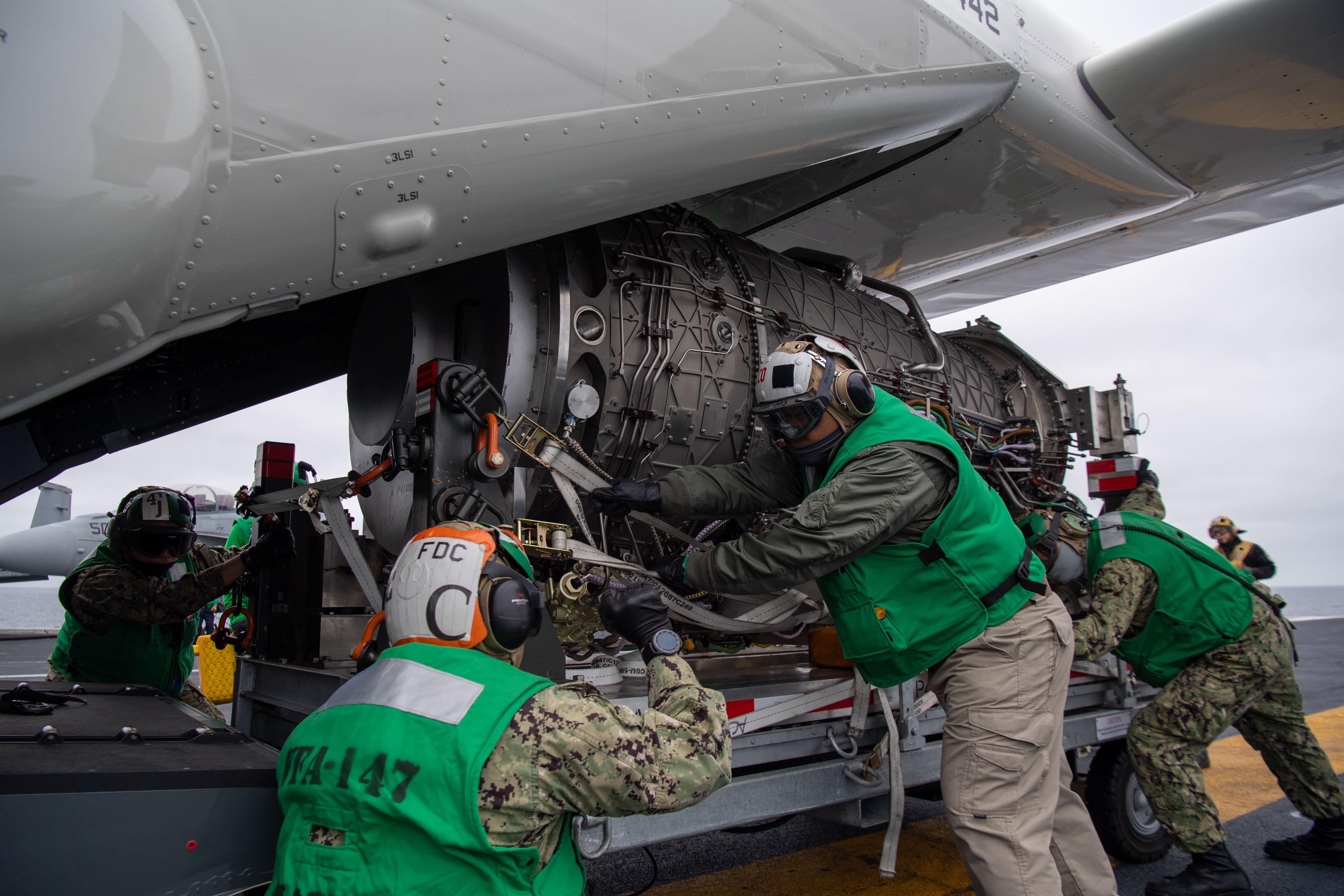 This success follows a November 2020 milestone, during which VRM-30, CVW-2 and Vinson conducted the Navy’s first landings, take-offs, and refueling of a Navy CMV-22B Osprey from an aircraft carrier.

The at-sea power module replenishment evolution consisted of loading, transporting and unloading the F135 power module from a shore-based location to the carrier by way of a CMV-22B.  The power module is an engine component used by all three F-35 Lightning II variants.

The CMV-22B is the U.S. Navy version of the V-22 Osprey, a multi-engine, dual-piloted, self-deployable, medium lift, vertical takeoff and landing (VTOL) tilt-rotor aircraft.  The CMV-22B can transport cargo and passengers as far as 1,150 nautical miles; provides enhanced survivability and beyond-line-of-sight communications; and has the required cargo capacity and fast cargo loading/unloading.  Coupled with its ability to transport the F-35 power module inside its cargo bay, CMV-22B is the ideal choice to provide required carrier on-board delivery capabilities for F-35C operations at sea. The delivery marks a milestone in the integration of CMV-22B to the Carrier Air Wing, validates the F135 modular maintenance concept at sea, and most importantly supports future carrier air wing deployments with next-generation platforms.

“The CMV-22B is a great addition to the carrier air wing,” said Capt. Matt Thrasher, commander, CVW-2. “The Osprey is a robust logistical platform that not only supports the F-35C but also gives the entire air wing increased range and transport capacity. Its addition to our team ensures that CVW-2 remains ready to perform as-advertised while on deployment.”

CVW-2 is currently embarked aboard Vinson under the command of Carrier Strike Group (CSG) 1.

CVW-2 is leading the charge in introducing and integrating the next generation of aircraft and capabilities in the Fleet as the U.S. Navy’s first Carrier Air Wing to deploy with the F-35C Lightning II, E-2D Hawkeye and the CMV-22B Osprey. The Navy’s next iteration of the Carrier Air Wing will be more lethal and survivable through the integration of organic fourth-generation kinematics and fifth-generation information and survivability, increased command and control and airborne electronic attack capacity, all sustained with a reliable logistical support platform.

“With the addition of the newest fifth-generation aircraft, the Navy has delivered the world’s most capable, lethal and ready air wing to our strike group,” said Rear Adm. Timothy J. Kott, commander, CSG-1. “Delivering the right balance of presence and power, including airpower supremacy, strike groups continue to be one of our nation’s primary on-call assets in times of need.  By maintaining a lethal, ready strike group, manned by the world's most skilled Sailors and outfitted with the best equipment, fifth generation aircraft will help America maintain our advantage at sea and protect our nation for years to come.”

Capable of embarking both the F-35C and the CMV-22B, Vinson is the first aircraft carrier equipped to support fifth-generation aircraft.  With its recent modifications, no other weapons system has the responsiveness, endurance, multi-dimensional might, inherent battlespace awareness or command and control capabilities of the Vinson and CVW-2.

Upgrades included enhanced jet blast deflectors able to take the increased heat generated by the F-35C and the Autonomic Logistics Information System (ALIS), the new computer network that supports the unique maintenance and tactical operations functions of the advanced aircraft.

“Our crews and staffs have done a fantastic job during integrated operations with the new aircraft and associated upgrades,” said Capt. P. Scott Miller, Vinson’s commanding officer.  “We are truly a team.  The successful replenishment of the power module is another testament to that team and our Sailors, who are the most dedicated, best trained and well educated in the world.  The continued professionalism and warfighter spirit they demonstrate each and every day is the number one key to our success time and time again.”

Vinson is currently completing a series of “work ups” and certifications in preparation for future operational tasking. 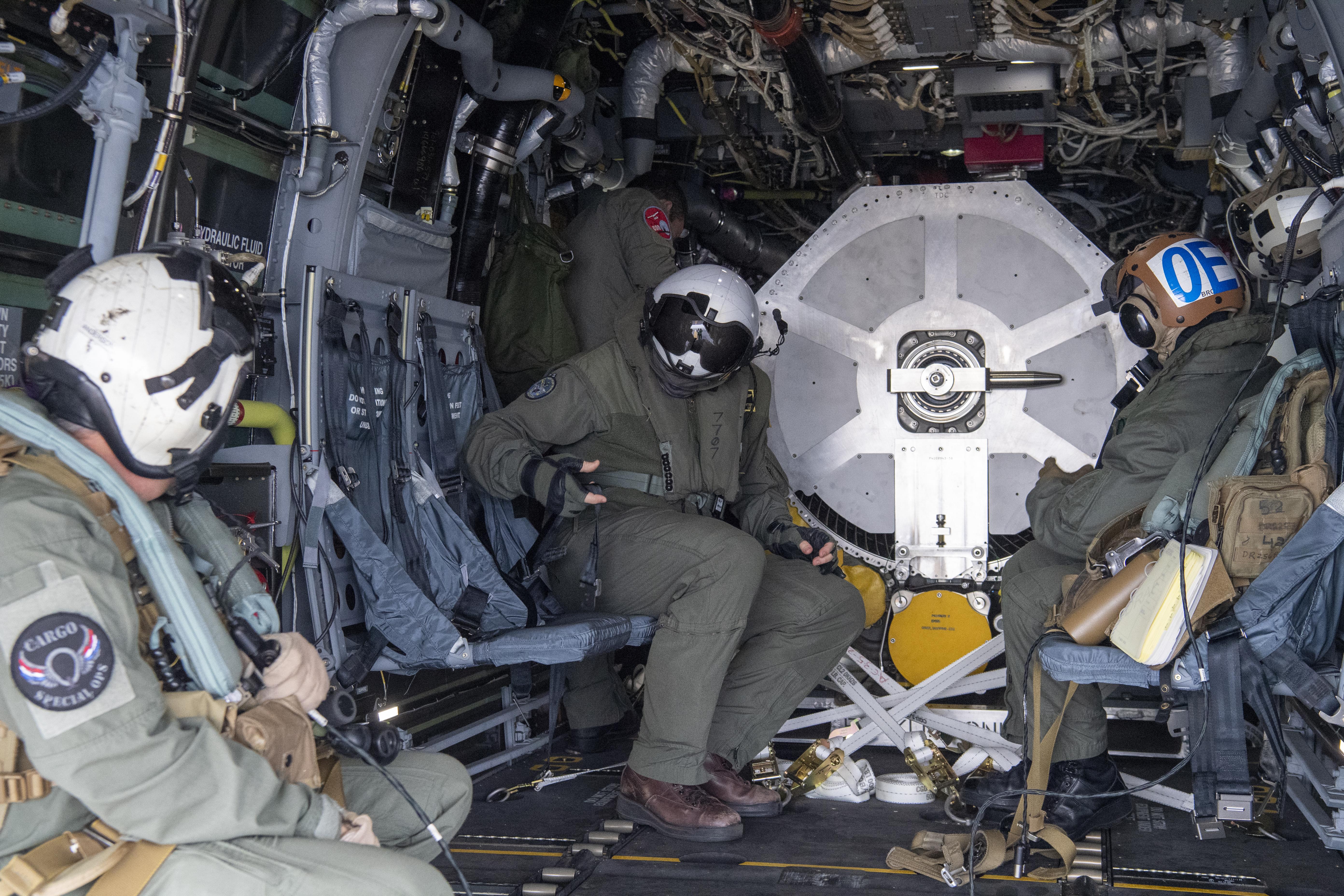