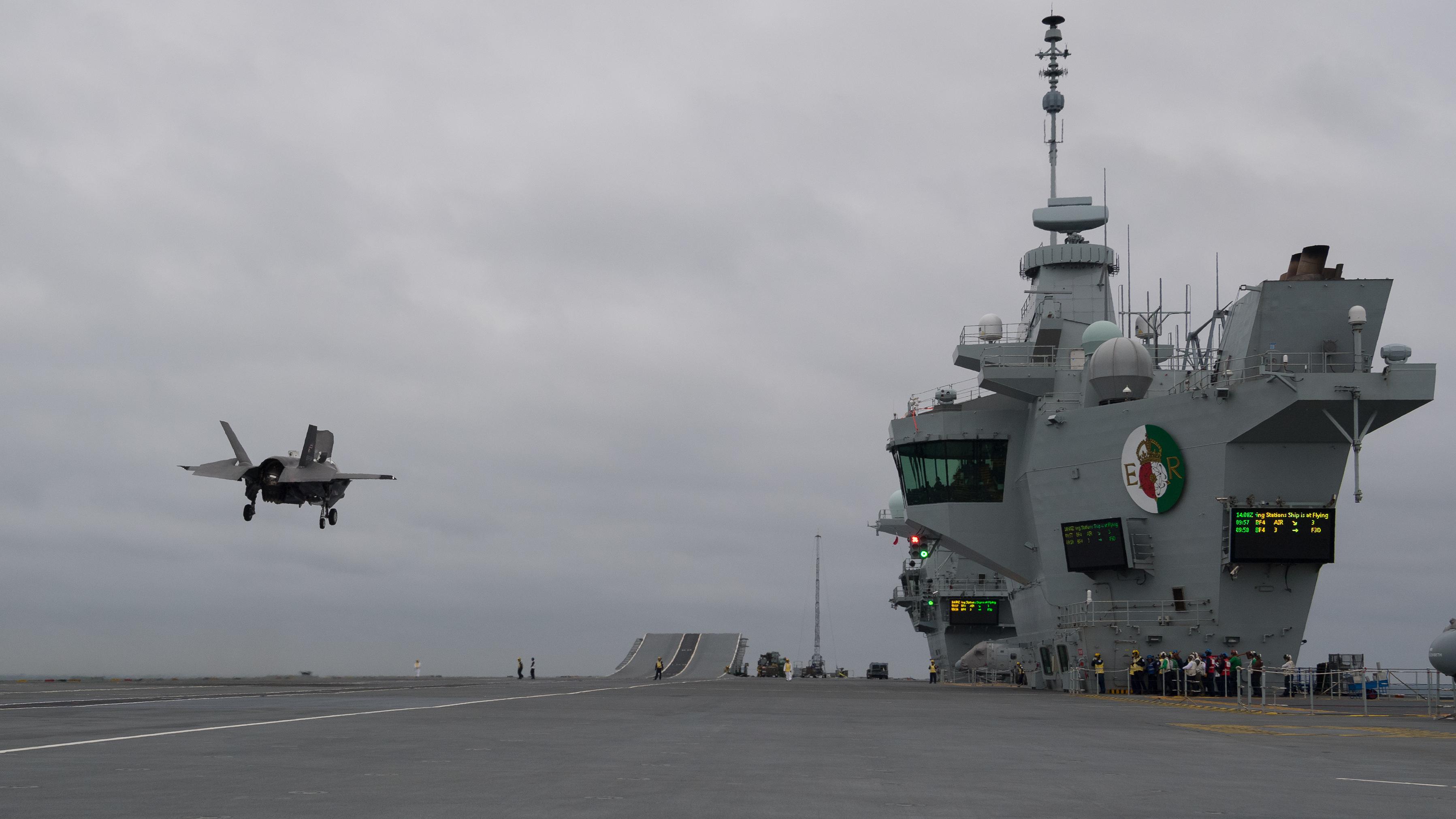 The early phases of the installation were supported remotely by the Naval Air Warfare Center Webster Outlying Field (NAWCAD WOLF) Air Traffic Control and Landing Systems (ATC&LS) Division. Once the initial installation activities were completed, the NAWCAD WOLF team, led by Shawn Magoon, travelled to the United Kingdom in early February to finalize the installation and support the certification, but first had to overcome a few challenges.

The team faced heightened U.K. coronavirus travel restrictions, unique policy questions concerning the installation of the JPALS system on HMS Queen Elizabeth, and even a case of lost luggage. Magoon’s resourcefulness, onsite leadership and interface with U.K. counterparts was instrumental in overcoming these challenges and in completing the installation and pierside portion of the certification in an incredibly compressed timeline, said Capt. Kevin Watkins, PMA-213 program manager.

“It truly is a testament to the individual determination, communication and leadership that all of our teammates embody, because each of these ship installs and certs was incredibly difficult, with barriers from COVID travel restrictions to first-time technical installation issues on a new ship class,” Watkins said. “Our team successfully overcame each daily challenge to deliver the needed capability to our International Allies and U.S. Marines.”

Magoon said, “Our USN-3 and SPN-41B teams, both onboard and supporting from home, exemplified our core values of teamwork and customer focus in overcoming many challenges to successfully accomplish our mission delivering on time system certification onboard HMS Queen Elizabeth.

The NAWCAD WOLF team was joined by members of Naval Test Wing Atlantic ATC&LS Test Branch, Air Test and Evaluation Squadron (VX) 23 to complete the at-sea portion of the certification. The ATC&LS Test Branch is the certification authority for all U.S. ships, and in this case for the U.S.-owned JPALS installed aboard the British aircraft carrier, while also supporting certification recommendations for FMS installed systems. Coincidentally, the final certification flights for HMS Queen Elizabeth were completed on the same day another team from PMA-213 was carrying out PALS certification for the Italian aircraft carrier, ITS Cavour (CVH 550) off the U.S. east coast.

The success of the installation and certification of the JPALS and SPN-41B systems aboard HMS Queen Elizabeth was due to the close collaboration between PMA-213, NAWCAD WOLF, VMFA-211 and their U.K. counterparts, Watkins said.

The teamwork and constant communications between the U.S. and U.K. partners fully aligns with the March 2021 Interim National Security Strategic Guidance to “reinvigorate and modernize our alliances and partnerships around the world” and in “forging a strong, common agenda with the European Union and the United Kingdom.”