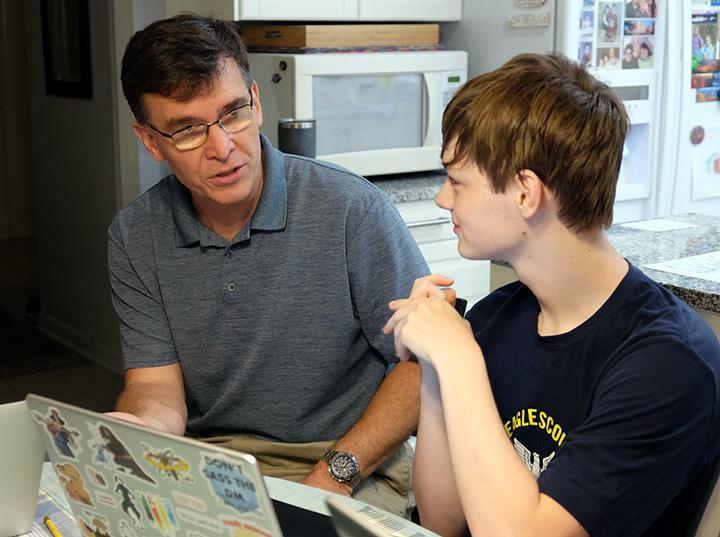 Dan Ensminger, left, head coach of the Bot Brigade Quartic robotic team, discusses robot programming with team member, Seth Rollins. For the past 14 years, Ensminger has opened his home to the local youth teams, providing them with a positive environment to learn problem-solving and practical applications. (Photo courtesy of Bot Brigade Quartic)

The Airborne Electronic Attack Systems Program Office (PMA-234) Test and Evaluation Lead escorted a team of students, known as the Bot Brigade Quartic, to the For Inspiration and Recognition of Science and Technology (FIRST) Chesapeake Regional Championships, in Hampton, Virginia, where they won first place for their video submission for the Promote Award, Apr. 9 and 10.

Dan Ensminger has used his enthusiasm for engineering and program acquisition experience to lead 29 local youth robotics teams over the past 14 years.

"We are developing the next generation of problem-solvers through practical applications in a fun environment, and I am so proud of what these students are able to learn and accomplish,” said Ensminger.

He became interested in building robots after learning about the LEGO Mindstorm robot kits.  While researching ways to make the kit more fun for his three kids, he stumbled across the FIRST Lego League website. The organization fosters a hands-on approach to Science, Technology, Engineering, and Mathematics (STEM) learning and has organized competitions.

Ensminger saw that the deadline for registering teams for the FIRST Lego League (FLL) was only three days away and since that did not give him and his family time to find a team, he decided to pay the $200 fee to register a new one.

“I assumed we could find at least two other students to meet the minimum team size, and a week later our newly minted team had 10 members,” stated Ensminger. “Bot Brigade had a very successful first season in 2008, advancing to the Maryland State Championship, and the club grew from there.”

All three of Ensminger’s children are mechanical engineers, which he credits to their involvement in robotics.

“FIRST robotics exposed my children to the engineering process, and the satisfaction they could derive from applying science and math to solve “real-world” problems,” he said. “Our team has dozens of graduates who have chosen STEM fields after exposure through robotics that allowed for a better understanding of their interests and talents before making decisions about future careers.”

As a head coach, he ensures members stay motivated and receive training on the robot design process, basic mechanics, 3D modeling, and programming. He also assists with recruitment of team members and mentors.

“The most rewarding aspect of coaching robotics is sharing the team’s excitement and satisfaction when they work through a tough design, build, or programming problem and have achieved a successful result – usually indicated by shouts of joy coming from the garage,” Ensminger said. “It is also very exciting to see students find something they enjoy that translates to what type of work they may be interested in pursuing before heading off to college.”

This season’s Bot Brigade Quartic team consists of 12 students from 7th to 12th grade across St. Mary’s County, including public, private, and homeschooled students. The team meets with Ensminger every other week during the off-season and five plus days a week leading up to any competition. The team also participates in virtual meetings for training and administrative tasks.

At this year’s FIRST Tech Challenge (FTC) regional championships, in addition to winning the Promote Award, the team went undefeated in their five qualifying matches; finished 7th place, out of 40, during qualifying rounds; and had the highest average autonomous scoring at the tournament out of 80 teams.

“The team experienced connectivity issues during competition rounds that interrupted control of the robot and suppressed the team’s scores during driver-controlled periods,” Ensminger said. “Problems only came up during actual competition rounds so they were difficult to troubleshoot. This drives home the importance of testing under actual operational conditions, something to which everyone in the engineering world can relate.”