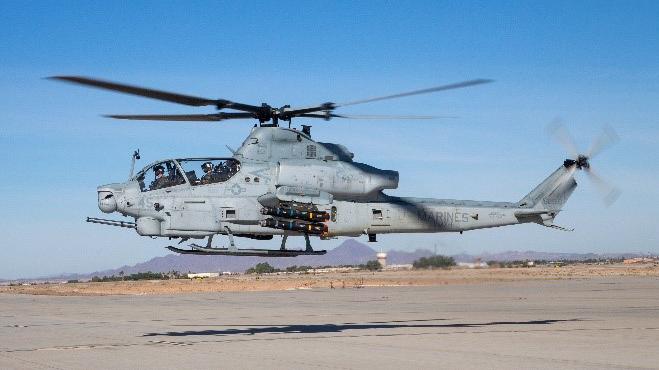 JAGM, a joint program with the Army, is a precision-guided missile that combines semi-active laser guidance and millimeter-wave radar. It is an air-to-surface precision-guided munition (PGM) used on joint rotary-wing, unmanned aircraft systems, and fixed-wing platforms to destroy high-value, stationary and moving, land and maritime targets.

“IOC marks a major milestone for the JAGM program and significant increase in capability for the AH-1Z,” said Cmdr. J. Reid Adams, deputy program manager for precision-guided missiles. “This accomplishment is a true testament of the tireless efforts made by so many across DoD and our industry partners to support the warfighter.”

The JAGM program successfully completed a thorough Initial Operational Test and Evaluation period with a recommendation to field the missile. AH-1Z pilots tested JAGM off the coast of Florida in November 2021 and conducted land-based testing in Arizona in December 2021.

“Incorporating systems such as JAGM on the AH-1Z is essential in keeping the platform at the forefront of warfighting capabilities,” said Col. Vasilios Pappas, USMC H-1 light/attack helicopter program manager.

JAGM provides improved lethality, operational flexibility, and a reduced logistics footprint to the H-1 platform. It is part of an effort to upgrade the AH-1Z and UH-1Y aircraft in alignment with the Commandant’s vision of force modernization to maintain a competitive edge against potential adversaries.