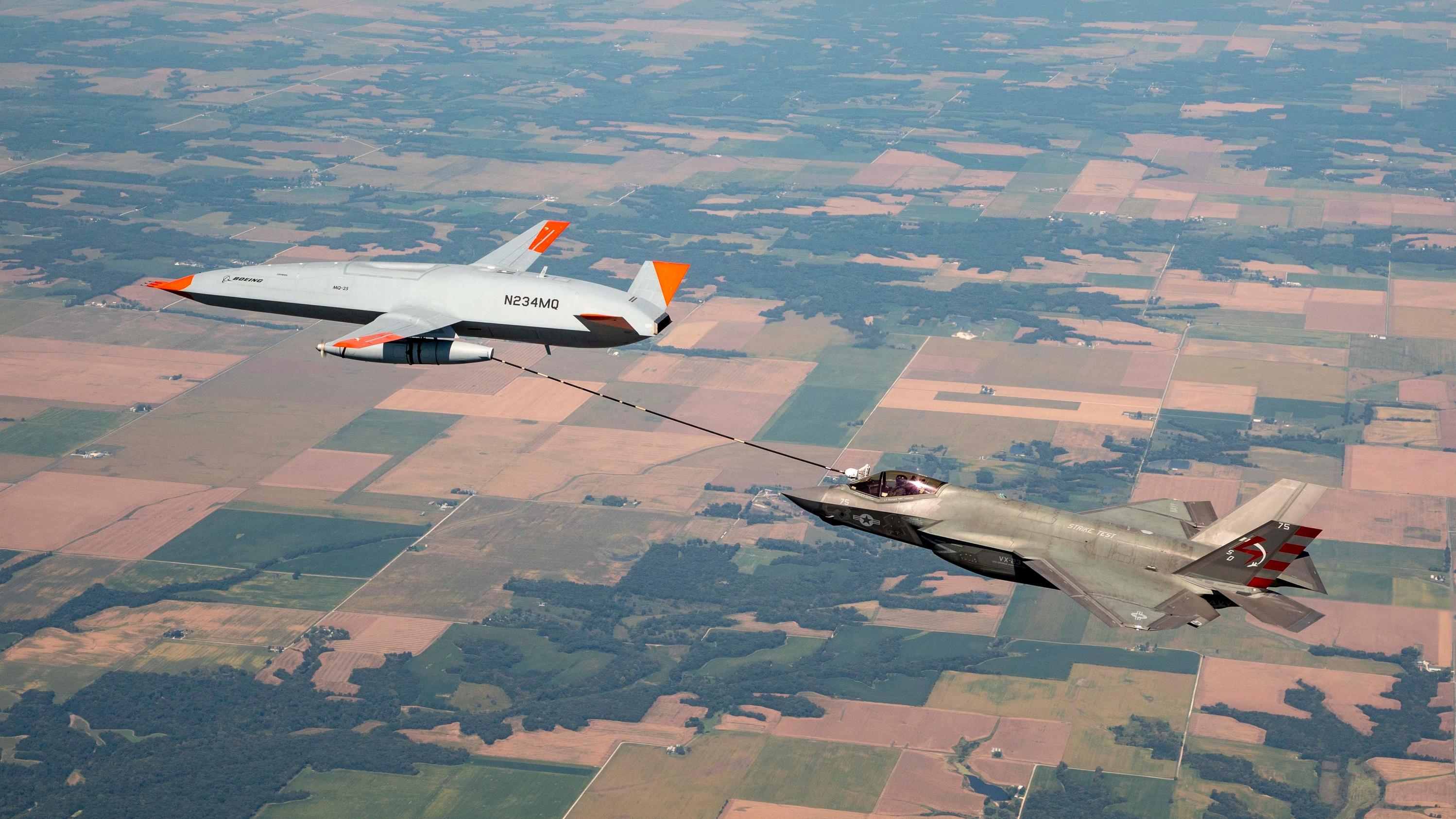 The Navy’s Unmanned Carrier Aviation (PMA-268) program completed its first aerial refueling of an F-35C Lightning II aircraft by the Boeing-owned MQ-25 test asset, known as T1, as part of the Navy’s broader initiative to field unmanned systems that transform and enhance the fleet’s capability, capacity and lethality.

The integrated Navy and Boeing MQ-25 team, in coordination with the F-35 program, conducted the refueling flight Sept. 13 near MidAmerica St. Louis Airport in Mascoutah, Illinois.

“Every T1 flight with another Type/Model/Series aircraft gets us one step closer to rapidly delivering a fully mission-capable MQ-25 to the fleet,” said Capt. Chad Reed, the Navy’s PMA-268 program manager. “Stingray’s unmatched refueling capability is going to increase the Navy’s power projection and provide operational flexibility to the carrier strike group commanders.”

Once operational, MQ-25 will refuel every receiver-capable carrier-based aircraft. Each unique aircraft platform will have a different aerodynamic interaction in the wake of MQ-25. Conducting refueling test missions with various aircraft allows the program to analyze data and determine if any adjustments to guidance and control are required.

Earlier this summer, the program completed unmanned refueling missions with an F/A-18 Super Hornet and E-2D Advanced Hawkeye. Each aircraft platform is aerodynamically unique so how they respond in the wake of a tanker is different. Flying different aircraft behind the MQ-25 lets us assess how they will interact, Reed said.

Following this flight, T1 will enter into a modification period to integrate the deck handling system in preparation for a shipboard demonstration this winter. To date, T1 has conducted 36 flights, providing the program with valuable information on aerodynamics, propulsion, guidance and control in advance of the MQ-25 engineering and manufacturing development aircraft deliveries.

The MQ-25 will be the first operational carrier-based unmanned aircraft and will provide critical aerial refueling and intelligence, surveillance and reconnaissance capabilities to support the Air Wing of the Future - a mix of fourth and fifth-generation aircraft, manned and unmanned platforms, and netted sensors and weapons.

Along with organic tanking, the MQ-25 will pave the way for manned and unmanned teaming (MUM-T) of carrier-based aircraft that will extend the strike range and enhance maneuverability.  As unmanned tanking capacity increases, the manned tanker requirement decreases, promoting additional service life and capacity available for manned strike-fighter missions. 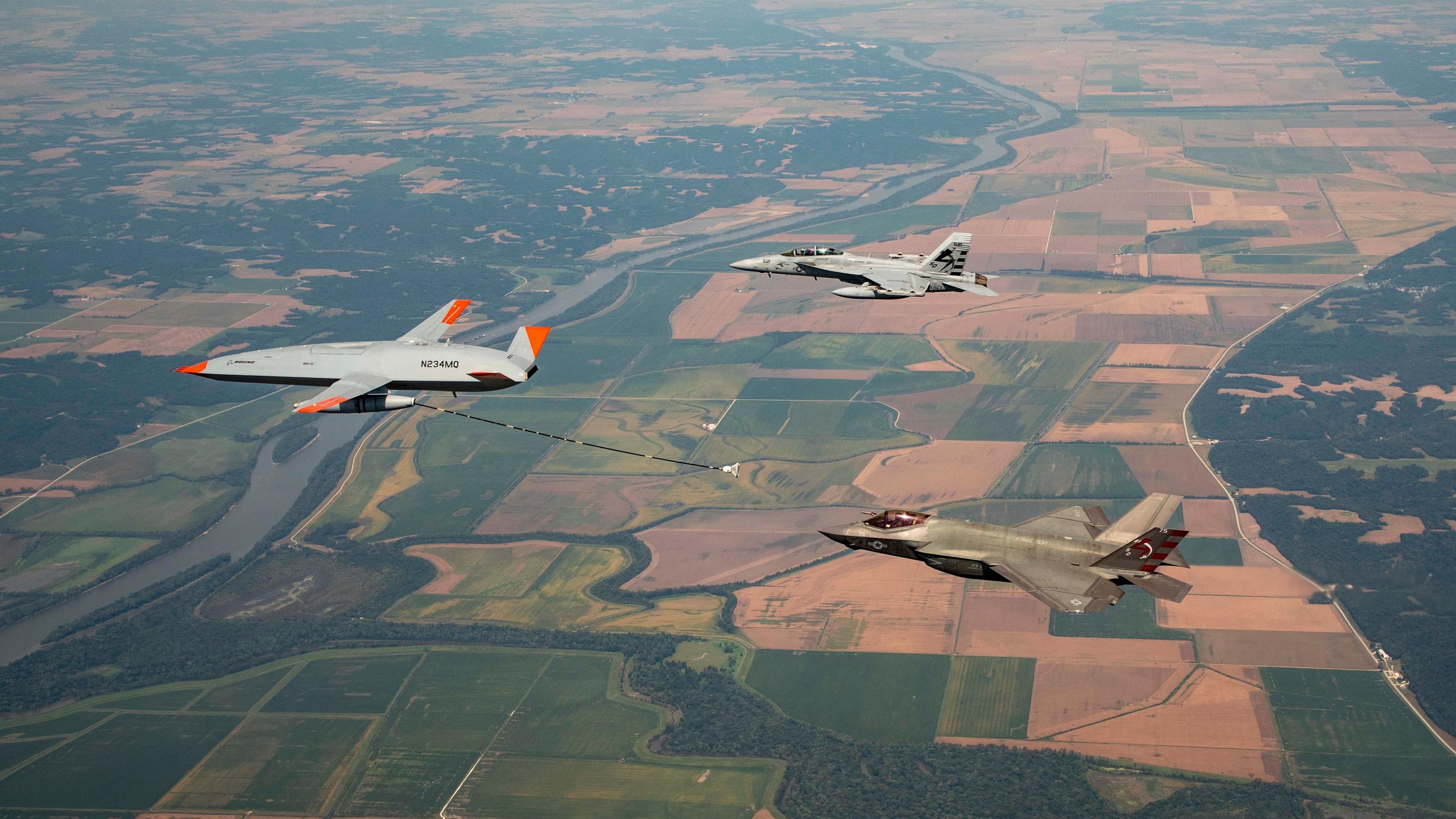 The F-35C Lightning II is refueled by the MQ-25 test asset as an F/A-18 chase aircraft hovers nearby during a test flight Sept. 13 near MidAmerica St. Louis Airport in Mascoutah, Illinois. (Photo courtesy of Boeing)