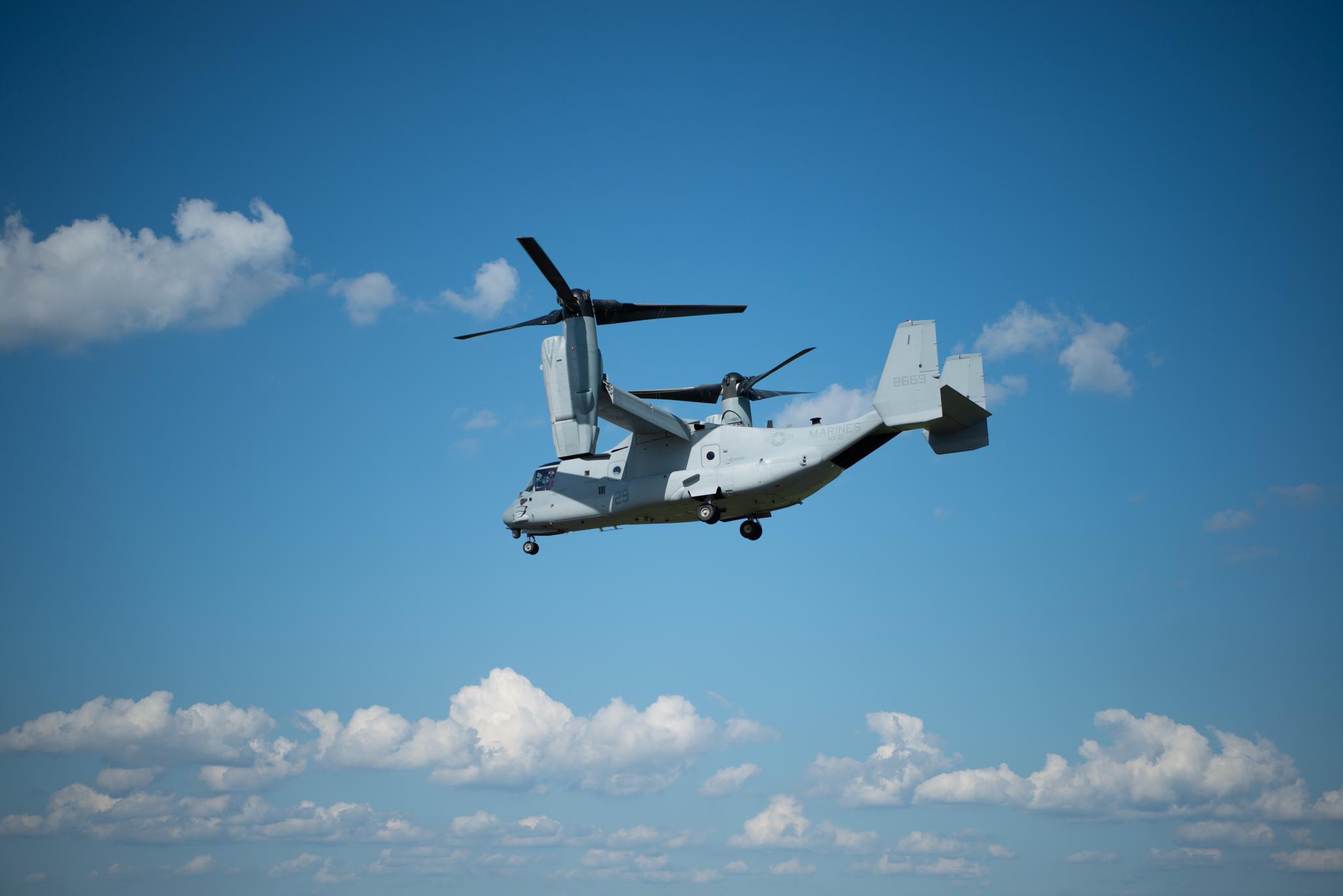 The MV-22B Osprey flies for the first time June 15 with the latest Intrepid Tiger II (V)4 (IT II) Electronic Warfare payload. This marked the start of developmental flight testing for IT II (V)4 and the first time the payload is mounted internally on an aircraft. (U.S. Navy photo)

“The significance of this developmental test flight was two-fold,” said U.S. Navy Capt. Michael Orr, Airborne Electronic Attack (AEA) Systems (PMA-234) program manager. “Not only was this the first time we’ve integrated the Intrepid Tiger II capability onto an Osprey but also the first time the capability has been incorporated internal to a platform.”

PMA-234 Marine Air-Ground Task Force EW Team Lead Bill Mellen said the typical, externally mounted pod was not an option because the MV-22 tilt rotor aircraft does not have traditional wing stations from which to mount podded payloads. The AN/ALQ-231(V)4 IT II system’s upgraded design consists of a roll-on/roll-off rack-mounted payload, controlled from a laptop in the aircraft cabin.

The IT II is a precision, on-demand, EW weapon system designed to provide Marine Corps fixed and rotary wing aircraft with an organic, distributed, and networked EW payload that can be controlled from the cockpit or by a ground operator.

The (V)4 system design will include state-of-the art upgrades, utilizing government and commercial-off-the-shelf technologies and jammer techniques that will allow the Marine Corps to keep pace with the ever-evolving threats on the battlefield, and provide the needed adaptability to allow for future iterations of expanded frequency coverage and advanced capabilities, said Mellen.

“As the 21st Century Battlespace becomes more complex and more contested, military assets must support themselves across the entire spectrum of threats,” said U.S. Marine Corps Col. Brian Taylor, V-22 Joint Program Office program manager. “The fielding of this upgrade provides a significant and incremental improvement in the V-22’s organic electronic warfare capability, providing commanders more options to support our Marine Corps ground forces. This improves both operational safety to our aircrews and operational success to the commander, our ultimate goals in everything we do.”

Following successful integration on the MV-22B, the IT II team will further expand the V4 design to include a counter-radar capability on the KC-130J aircraft, hoping to leverage much of the MV-22B technology, including the in-cabin rack-mounted payload design, Mellen said.

The IT II (V)4 is scheduled to begin fleet deliveries for the MV-22B in Fiscal Year (FY) 2023 to achieve Initial Operating Capability by the end of FY24 with an inventory objective of 42 total systems.