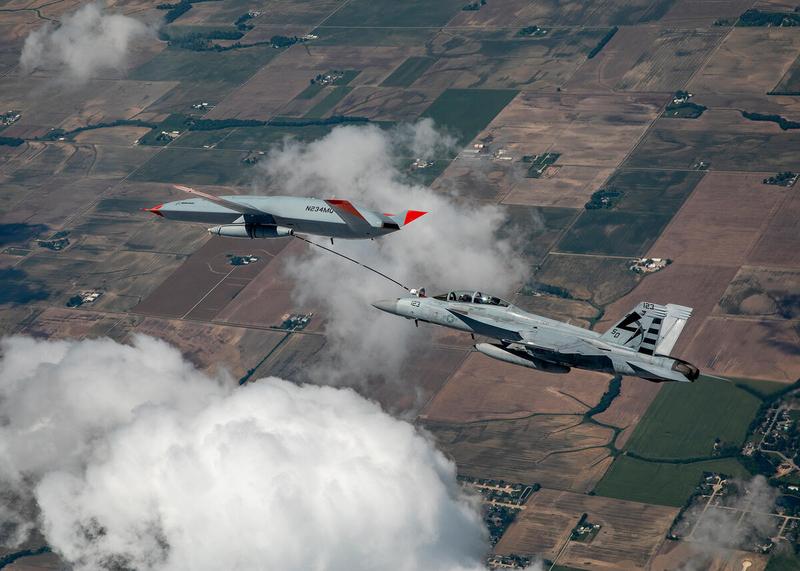 The MQ-25 T1 test asset refuels the Navy F/A-18 during a flight June 4 at MidAmerica Airport in Illinois. This test marked the first ever aerial refueling operation between a manned aircraft and unmanned tanker. (Photo courtesy of Boeing)

The MQ-25™ program successfully conducted the first ever aerial refueling operations between a manned receiver aircraft and unmanned tanker June 4 from MidAmerica Airport in Mascoutah, Illinois.

“This flight lays the foundation for integration into the carrier environment, allowing for greater capability toward manned-unmanned teaming concepts,” said Rear Adm. Brian Corey who oversees the Program Executive Office for Unmanned Aviation and Strike Weapons. “MQ-25 will greatly increase the range and endurance of the future carrier air wing – equipping our aircraft carriers with additional assets well into the future.”

During the flight, the receiver Navy F/A-18 Super Hornet approached the Boeing-owned MQ-25 T1 test asset, conducted a formation evaluation, wake survey, drogue tracking and then plugged with the unmanned aircraft. T1 then successfully transferred fuel from its Aerial Refueling Store (ARS) to the F/A-18.

“This is our mission, an unmanned aircraft that frees our strike fighters from the tanker role, and provides the Carrier Air Wing with greater range, flexibility and capability,” said Capt. Chad Reed, program manager for the Navy’s Unmanned Carrier Aviation program office (PMA-268). “Seeing the MQ-25 fulfilling its primary tasking today, fueling an F/A-18, is a significant and exciting moment for the Navy and shows concrete progress toward realizing MQ-25’s capabilities for the fleet.”

The test flight will provide important early data on airwake interactions, as well as guidance and control, Reed said. The team will analyze that data to determine if any adjustments are needed and make software updates early, with no impact to the program’s test schedule.

Testing with T1 will continue over the next several months to include flight envelope expansion, engine testing, and deck handling demonstrations aboard an aircraft carrier later this year.

The MQ-25A Stingray will be the world’s first operational carrier-based unmanned aircraft and provide critical aerial refueling and intelligence, surveillance and reconnaissance (ISR) capabilities that greatly expand the global reach, operational flexibility and lethality of the carrier air wing and carrier strike group. The MQ-25 is foundational to the Navy’s Unmanned Campaign Framework and is the first step toward a future fleet augmented by unmanned systems to pace the evolving challenges of the 21st century.

The MQ-25 T1 test asset refuels a Navy F/A-18 during a flight June 4 at MidAmerica Airport in Illinois. This flight demonstrated that the MQ-25 Stingray can fulfill its tanker mission using the Navy’s standard probe-and-drogue aerial refueling method. (Photo courtesy of Boeing)