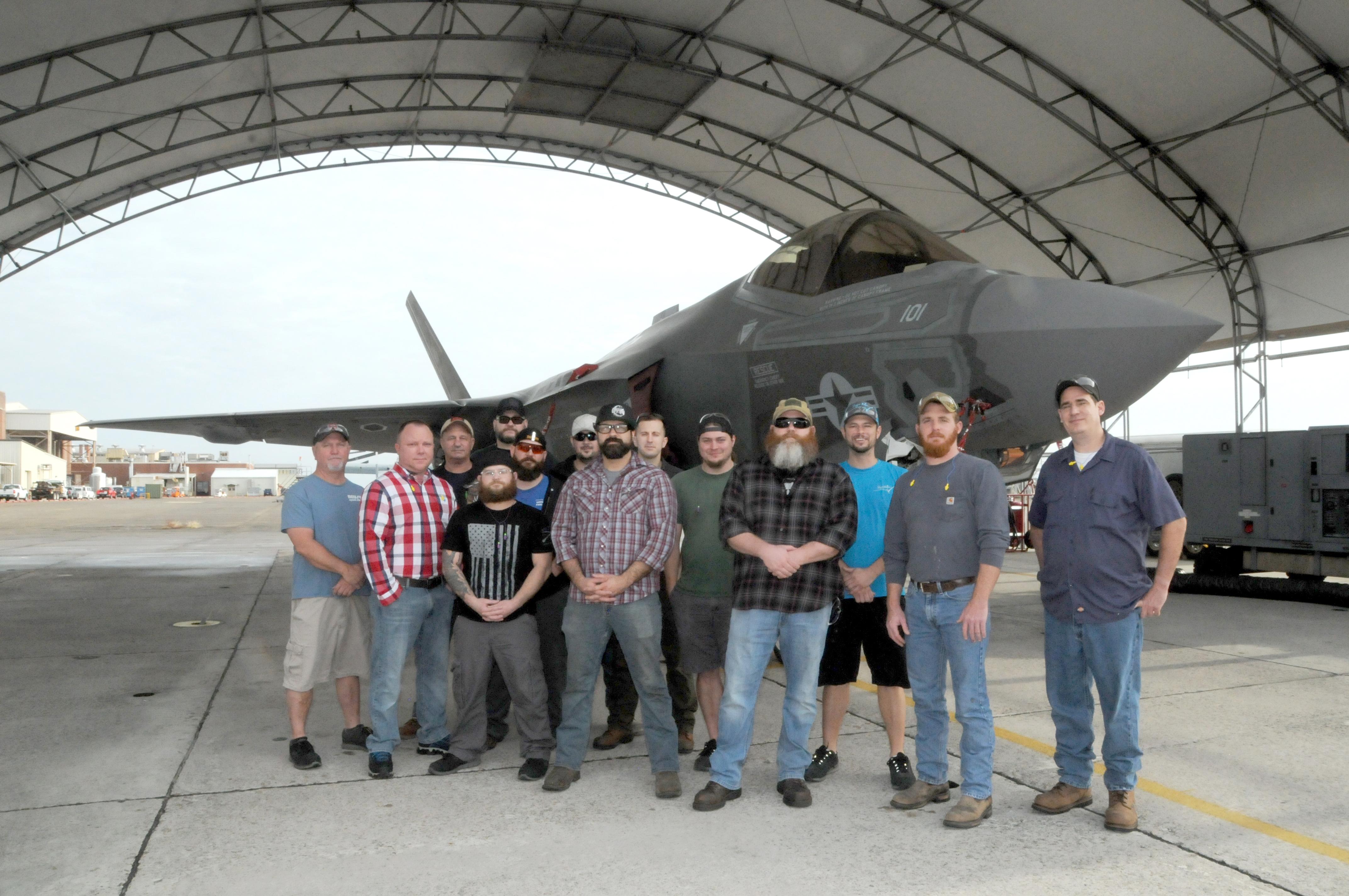 When issues arise with an F-35 Lightning II, a team of highly skilled aircraft maintenance professionals stands ready to rise to the challenge and get the jet back in the fight. Whether the aircraft requires in-service repair or battle damage needs mending, the F-35 Rapid Response Team (RRT) is ready to pack up and go.

“Anything that happens outside the depot – for the Navy, Marines or Air Force – anywhere around the world, they call us and we can deploy these RRT team members at a moment’s notice. We go out to wherever that site may be and perform that repair,” said David Thorpe, F-35 branch head at Fleet Readiness Center East, where the team is headquartered.

The RRT consists of expert, cross-trained artisans who hold journey-level, expert status in at least one trade, and no lower than skilled, worker-level status in others. Having team members with multiple skill sets allows for flexibility when determining which configuration of the team to deploy, Thorpe said.

“The F-35 Rapid Response Team is like a maintenance and repair special operations force,” he explained. “The concept is that we can send fewer people and they can help each other do the work.”

The flexible configuration means the team can pick and choose which artisans to deploy to a mission, based on what the technical requirements will be. Some jobs require more expertise in certain trades than others; for example, a recent RRT mission to Edwards Air Force Base, California, called for a dedicated low observable (LO) coating technician and a painter. Those skills sets aren’t required for every mission, but were necessary in this instance because the repair required high expertise in reapplying the coating.

“Sometimes the team is not just the airframer, sheet metal mechanic and electrician. Sometimes we send the painter, or the LO technician,” Thorpe said. “We also have quality assurance specialists who are ready to go when depot-level quality needs are required to incorporate the repair and sign it off.”

“You have to know the airplane,” he said. “I’m airframes, sheet metal, and LO-qualified. We have to have the drive and understanding to do the things we’re tasked to do, and we also have to be able to retain the knowledge from all the trades across the board that we need to know. That plays a huge role in our success as a team: knowing each other’s jobs, and the ability for us to work together.”

The recent mission to Edwards involved a repair in a location that presented accessibility challenges, and therefore also required expertise in low observable coating and paint restoration. The team had to remove a large panel from the aircraft in order to complete the repair – a panel that was not designed for removal under normal maintenance action, Thorpe said.

“A lot had to work in concert to get that aircraft back to a mission-capable status. We’ve got a lot of experience in taking off these big panels and putting them back down, but there are often complications involved in that,” he said of the repair, which involved an aircraft in the F-35 initial testing, operation and evaluation program with Navy Test and Evaluation Squadron 9, Det. Edwards.

“There were a lot of unknowns, because this particular skin removal hadn’t been done previously, but we were able to get the job done without many complications,” Thorpe continued. Engineers supply the team with the appropriate technical data prior to the mission, and that provides a solid jumping-off point; however, work doesn’t always go as planned, especially with first-time repairs.

“We ran into hiccups, just like with anything that’s never been done before, and we worked through them,” he said. “It was pretty difficult, but we wanted to keep our foot on the gas. Our team worked long hours and weekends to produce a quality product, safely and as quickly as possible, to support the warfighter and meet the mission – and we got really good reviews on the finished product.”

The unknowns of each mission are part of what drives the team to work harder, Stiver added.

“Not knowing what you’re getting into, and being able to push through it, stand back at the end and say, ‘That was a good time,’ is one of the most rewarding aspects of the job,” he said. “This feels a lot better than going somewhere for 30 days and doing a mundane fix. We thrive on the challenge.”

“Our squadron has worked with numerous contractor and depot-level teams and the F-35 RRT left a very positive and lasting impression. It was obvious to us that the RRT was a group of hand-selected individuals who possessed the right level of experience and motivation,” he said. “The team even went above their scope by assisting our Sailors with regression checks and the installation of panels. It was a true team effort.”

Not only did the RRT get the job done, they managed to do it within their planned time frame – an especially big win for a repair that has never before been completed. And while this aircraft was not a forward-deployed asset – like the majority of the aircraft repaired by the RRT – meeting that repair schedule on a test aircraft is important to help the Navy realize initial operational capability and system demonstration and development dates, Thorpe said.

Without the expertise and hard work of the RRT, the repairs to the aircraft would have taken much longer, Quant added.

“I am confident in the ability of our Sailors; however, this repair evolution did require a very high level of structural repair experience that we did not possess,” he explained. “This job would have taken at least three weeks longer without the assistance and experience from the RRT.”

“Our team goes out and they know it’s not a vacation – there’s a job to be done, and it needs to get done rapidly so we can get that asset back up,” Thorpe explained. “Getting that aircraft back in the air and meeting that flight schedule is important.”

“You have to be willing to do everything that comes along with the job, including long hours and weekends, but that’s also part of the enjoyment of the job,” Stiver added. “You’re actually working for the warfighter, and putting them back in the air. That means something to us.”

The RRT has been eager to take on new challenges since its inception in 2017 and, given the proper resources, there’s almost nothing they can’t do, Thorpe said.

“These guys crave the challenge and they’re ready and willing for more,” he explained. “With solid engineering instructions, parts availability, and whatever support equipment or tooling we might need – if we throw this team at it, they can do it.”