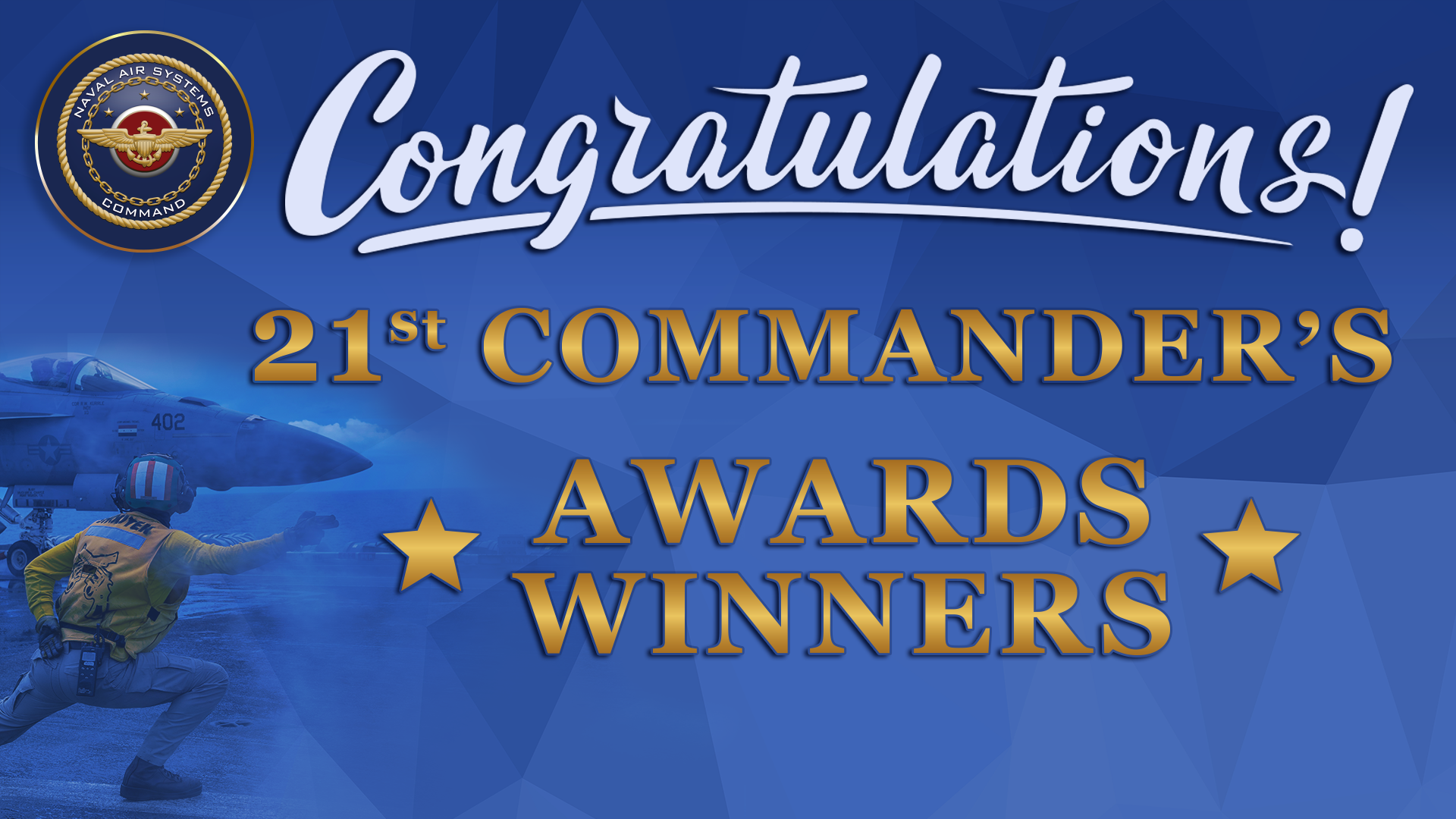 The winners of the NAVAIR Commander’s Awards were recognized virtually at the 21st annual awards ceremony March 31 for delivering capability faster, improving readiness and providing innovative technologies and business solutions.

“You have demonstrated that boldness, creativity and leadership that are the building blocks of our mission-aligned organization,” said NAVAIR Commander Vice Adm. Dean Peters. “Thank you for setting the bar high, and congratulations for a job well done. You have accomplished so much under the unprecedented environment of this last year.”

The winners, by category, are listed below:

The Surface Evaluation through Autonomous Collection Planning (SEACOP) project exemplified Pontzer’s employee development and creation of training opportunities. He sought out participation and collaborated with Air Test and Evaluation Squadron 24 (UX-24) to secure resources. Pontzer mentored the team as they designed, built and tested an autonomous system that gathered images of commercial shipping vessels using a Small Tactical Unmanned Aircraft Systems (STUAS). The team was also required to complete a critical design review and flight readiness review attended by UX-24 and division leadership. The team had zero funding for material, so Pontzer encouraged them to use existing systems and low-cost micro and laptop computers for code development. They developed an innovative way to use the RQ-26 AeroStar as their STUAS testbed. This project developed successfully their knowledge, abilities and skills in an important emerging technology and encouraged collaboration among employees from the Engineer and Scientist Development Program. The SEACOP team presented their project at the Young Professionals Symposium and was a fiscal year 2020 Innovation Award nominee.

The NAWCAD FAST team achieved a 50% reduction in external funding document acceptance and solved multiple command shortfalls by creating an electronic workflow system for accepting tasking and funds from financial systems other than the Navy’s Enterprise Resource Planning system. Previously, acceptance of these funds was a manual, serial process with limited visibility into the status of workflow and no insight into turnaround times or performance metrics. The tool’s abilities to track documents and generate metrics on each stage of acceptance have greatly improved workload management. Additionally, the FAST tool’s automation of communicating funds acceptance back to customers has eliminated more than 1,000 emails per year. The team continues to add incremental system enhancements to improve and streamline the process. Modifications are being incorporated to support science and technology funding documents, which have unique workflows. An interface to QLIK has been implemented, providing a robust set of dashboards for any user to monitor real-time data-driven metrics.  Since deployment across the NAWC, additional automation continues to be implemented to auto populate required data, wherever possible. These recent and ongoing enhancements continue to further reduce the administrative workload of multiple stakeholders, provide improved visibility into performance metrics, and support informed command-level resourcing decisions, all while increasing NAWCAD’s ability to initiate support rapidly to the warfighter.

The Noncombat Survival Radio Team completed procurement of a new noncombat survival radio, cutting the cycle time by two years, saving $30 million and using 98% of the funds for the end-item product.  The team identified and assessed commercially available radios using government engineering and test capabilities while simultaneously working with the manufacturer to address test results. The immediate entry into testing, certification, and search and rescue capability demonstrations (with operational user partnership) enabled improved radio transmission capability for search and rescue use, resulting in a rapid, cost effective fielding of improved capability to locate and recover downed aircrew.

FRCE is returning CH-53E Super Stallion and MH-53 Sea Dragon engines back to the fleet by reducing the T-64 engine turnaround time significantly, from 472 days to 298 days. After building a substantial backload of engines over the past five years, the T-64 engine team met its aggressive fiscal year 2020 production goal of 54 engines, despite challenges presented by facility/material constraints and the coronavirus pandemic. Further, this reduction in cycle time resulted in a lower cost per engine labor expenditure than in prior years.

The combined efforts of the Propulsion IPT and the FRCE Engine Production Team have resulted in a significant improvement to T-64 engine readiness levels. The amount of Ready for Issue engines increased from a low point of 544 to 594 – the highest level in seven years.

The Fleet Readiness Center Southeast (FRCSE) T-6 Trainer Team supported warfighter training by their continuous commitment to producing ready aircraft to the fleet. The efficiencies gained through the command-wide implementation and sustainment of the Naval Sustainment System, combined with the Naval Air Depot Maintenance System, allowed a record number of T-6 aircraft to be delivered back to the fleet in a shorter period of time, resulting in an increase of ready basic aircraft. They succeeded in providing urgent support and improved readiness to Commander, Naval Training Command, and Commander, Fleet Readiness Centers, depot activities.

The team’s performance improvements reduced the cycle time from 187 days to 77 days. FRCSE also improved the quality of the aircraft delivered to the fleet. The team updated engineering directives, work documents, routers, maintenance references and quality checkpoints to ensure the artisans on the shop floor received clear and concise guidance. This resulted in an 18% reduction in defective work hours, a 16% reduction in the cost of poor quality and 24 of 33 aircraft delivered with zero deficiencies.

The Augmented Reality Remote Maintenance Support Service (ARRMSS) technology has the potential to save the DoD millions in travel and labor funds while decreasing mean time to repair. This year, the ARRMSS team developed a prototype version of the system, demonstrated the capability to leadership during the August 2020 Advanced Naval Technology Exercise, and won the 2020 DoD Virtual Maintenance Innovation Challenge. The rapid development and deployment, especially during a global pandemic, was an exceptional example of speed to the fleet.

In the midst of a global pandemic, Bromley, the MQ-25 deputy program manager for the Unmanned Carrier Aviation Program Office, worked to award a modification successfully to the MQ-25 Engineering and Manufacturing Development contract in half the time typically required to support changing the MQ-25 Ground Control Station. She forged trusting relationships with all parties while supporting productive negotiations and elevated team members’ expertise, innovative ideas and solutions. MQ-25 remains on track to be one of the fastest development programs to reach initial operational capability and deliver a critical warfighting capability to the fleet, largely due to Bromley’s visionary leadership.

The AH-1Z Viper readiness demonstrated large improvement during fiscal year 2020, increasing to 68% mission capable and topping out at a 72% monthly average at the end of the calendar year. This is the result of the Sustainment Program Baseline (SPB) Team, who removed obstacles and refined new products and processes after defining measurable goals involving the entire H-1 team. This effort resulted in improved readiness for both AH-1Z and UH-1Y, despite ongoing challenges with supply and maintainability.

This award recognizes individuals and teams that promote, practice and uphold the principles of the command’s Small Business Program.

This award, sponsored by the Association of Naval Aviation, is presented annually to the individual or group of individuals within NAVAIR who achieved or helped achieve significant improvement in the design or modification of an aircraft or aircraft system.

The Distributed Aperture Infrared Countermeasure (DAIRCM) Team achieved significant accomplishments in 2020.  The team completed joint urgent operational need (JUONS) testing and improved system performance through multiple hostile fire indication, missile warning, LASER warning and integration events.  The successful completion of these test events enabled accreditation of the Digital System Model by the Commander, Operational Test and Evaluation Force, in October 2020.  The tireless work of the DAIRCM team to achieve this accreditation resulted in two fielding decisions by Chief of Naval Operations N98 for the U.S. Navy and the Deputy Commandant of the Marine Corps, Aviation for the U.S. Marine Corps for installing and fielding on operational aircraft.  Additionally, the team awarded successfully the $120 million engineering and manufacturing development contract, which will complete the non-recurring engineering required to transition the JUONS to a Program of Record and field this much needed capability on additional Department of the Navy platforms. These efforts were challenged by coronavirus-mandated restrictions and the fiscally constrained environment, because of the reprioritization of more than $100 million from the fiscal year defense program budget.