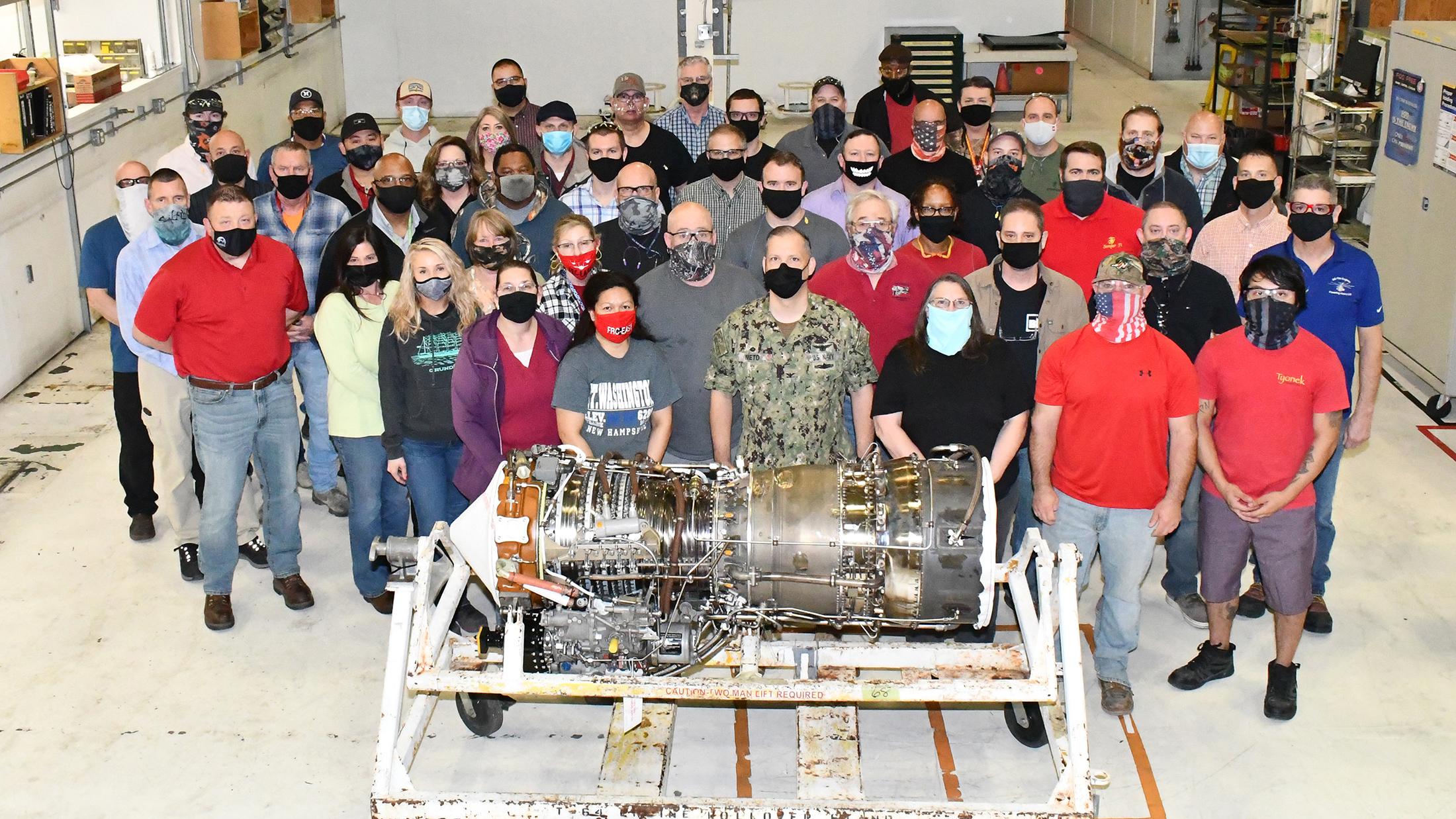 The winning teams and individuals, Peters said, exemplify NAVAIR’s two primary mission areas of delivering advanced capability in a timely manner, and sustainment of the equipment delivered by the command.

“In other words, speed and readiness,” he said. “These are our North Star mission areas, and they drive our long-term vision, they drive our day-to-day resource allocation.

“Ultimately, the value we provide to naval aviation is through our most valuable resource, which is our people,” Peters added. “This is about outcome, with the understanding that each and every person has the ability to positively and meaningfully impact mission success.”

FRCE’s nomination, chosen as the winner from 52 total submissions to the awards program, detailed the T64 team’s remarkable reduction in engine turnaround times in fiscal year 2020. The shop lowered turnaround times for the T64 engine, which powers the CH-53 Super Stallion and MH-53 Sea Dragon, to 298 days from the negotiated turnaround time of 472 days. In cutting turnaround times, the shop also met its fiscal year production goal of 54 engines despite challenges presented by facility and material constraints, and the coronavirus pandemic.

“It’s incredibly satisfying to see our T64 engine program recognized for their extraordinary efforts, and I couldn’t be more proud of this team of professionals,” said FRCE Commanding Officer Capt. Mark E. Nieto. “For them, the real reward isn’t in the recognition – it’s in seeing the impact their work has had on the H-53 program and naval aviation readiness, and knowing that what they’re doing has a direct effect on our nation’s warfighters. That’s what really drives the team to get in there and give their best effort every day.”

The gains made by FRCE’s T64 team have contributed to H-53 readiness, and the reduction in cycle time has resulted in a lower cost-per-engine labor expenditure than in prior years, making the T64 program more affordable for the fleet. Improvements continue today and current turnaround times consistently hover in the 250- to 275-day range, with FRCE posting a record turnaround time of 223 days in March – an improvement of 18 days over the previous best.

This success comes as the result of several years of effort, said David Rose, director of the Engines and Dynamic Components Division within FRCE’s Maintenance, Repair and Overhaul Production Department. A healthy supply chain, functional test equipment and the transformation of the organizational structure at FRCE have contributed to the about-face in the engine program’s performance, removing obstacles and providing the shop’s aviation maintenance professionals with the resources they need to get the job done successfully.

“The culture and the mindset of the shop's aviation maintenance professionals has not changed,” Rose explained. “These are the same people now producing engines and breaking records every time they sell one – the difference is they have the support and tools they need to accomplish the mission.”

Rose said the healthy supply chain heavily influences turnaround times in several ways, including making parts more readily available to the aircraft maintenance professionals working on the engines. Having piece parts available reduces the need to attempt repairs on piece parts; while often necessary, these repair attempts increase cost and cycle time, and impact “time on wing” for both the program and the fleet.

“Continued improvement in the supply chain has made a difference, as has the enormous effort put forth by the Facilities and Infrastructure Department at FRCE,” he added. “There has been a lot of creative thinking, a lot of coming together and thinking outside the box to keep things moving smoothly. Everyone knows what the goals and objectives are and the attitude now is, ‘How can we safely do it? How can we get it done with quality?’”

Improvements like these helped drive the T-64 team’s success, as has enhanced communication and coordination with other stakeholders: engineering, back shops, other FRCE divisions and departments, and even outside agencies that supply material. The bulk of the credit, however, goes to the dedicated aircraft maintenance professionals who show up and give their best every day, Rose said.

“Our people are what make the difference at FRC East,” he said. “They have the knowledge, they have the skill and they have the motivation – we just needed to remove the obstacles and let them do what they do best. They’re the key to the success of the engine program.”