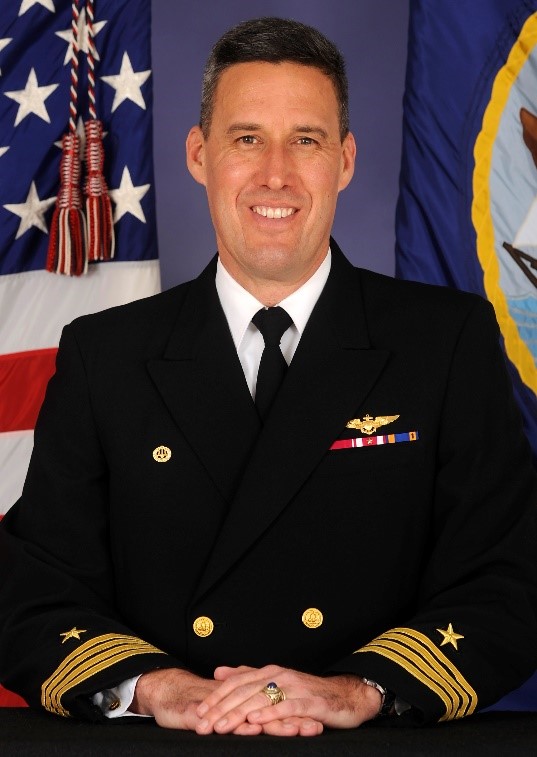 He’s been a part of many TACAMO firsts. He served as a member of the first E-6B Strategic Command Airborne Command Post crew and was the Task Group Commander for the unprecedented deployment of E-6B aircraft in support of Operation Iraqi Freedom where he was awarded an Air Medal for strike flight operations. Post department head, he was selected as an Aerospace Engineering Duty Officer and became an acquisition professional.

He didn’t know it at the time but his career in acquisition began with his graduation from the US Naval Test Pilot School. He served in a variety of development flight test, engineering, and program management roles. He served twice with VX-20 testing new technology as an E-6B project officer and platform coordinator. Additional acquisition experience includes being the mission systems engineering lead on the both the MQ-8B and MQ-8C Fire Scout unmanned air vehicles, deputy program manager for advanced tactical aircraft protection systems and deputy program manager for the P-8A aircraft industrial capabilities.

Prior to reporting as the program manager for Airborne Strategic Command Control and Communications he served as the Systems Acquisition Group military director and acting executive director. In this role he was the military lead for the rollout of the Reliability Control Board process across the Naval Aviation Enterprise.

Capt. Scott is a former VX-20 Test Pilot of the Year and Naval Air Warfare Center Commander’s Award winner. He was selected as a Secretary of Defense Executive Fellow where he worked for the global pharmaceutical company Merck and learned from executive leaders in companies like Boeing, Raytheon, Amazon, Alaska Airlines and Deutsche Bank.

Born in Carmel, California, Captain Scott is a graduate of the United States Naval Academy where he received a Bachelor of Science degree with merit in (Control) Systems Engineering. He earned a Master of Arts from Liberty University and completed executive education at both the University of Virginia and the University of North Carolina’s schools of business as well as the Massachusetts Institute of Technology.

Capt. Scott and his wife Charlotte have four children. The Scott family’s time serving at Naval Air Station Tinker in Oklahoma City left a mark on all of them. They all enjoy watching the University of Oklahoma Football and the OKC Thunder. Two of their children loved Oklahoma enough to return as students at OU. As a family they love the water and their free time often finds them at the beach or a pool.