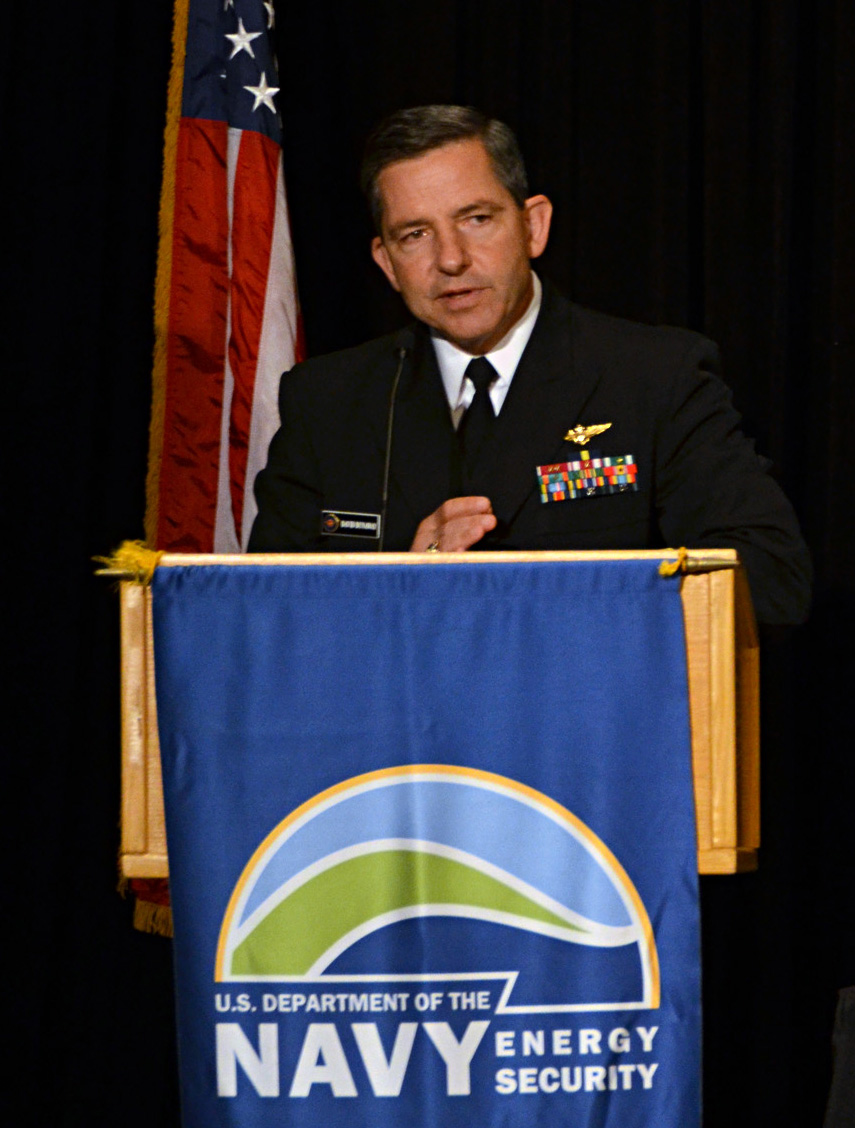 NAVAIR Commander Vice Adm. David Dunaway introduced NAVAIR’s Energy Strategy, which is built on partnerships and collaboration in acquisition policy, mission capabilities, and facilities and infrastructure at the Naval Energy Forum Oct. 17 in Washington, D.C. Dunaway also shared his focus on policy, technology and changing both the operational and workforce culture “to make energy a force enabler.” (U.S. Navy photo)

Hosted by the Navy’s Energy and Environmental Readiness Division (OPNAV N45), this year’s forum highlighted the use of energy to improve combat capability and focused on the progress achieved while working toward Secretary of the Navy Ray Mabus’ energy goals.

Dunaway introduced NAVAIR’s Energy Strategy, which is built on partnerships and collaboration in acquisition policy, mission capabilities, and facilities and infrastructure. He also shared his focus on policy, technology and changing both the operational and workforce culture “to make energy a force enabler.”

From an operational perspective, the Navy recognizes energy as a vulnerability, Dunaway said. “With aviation accounting for nearly 40 percent of all energy used by the Navy, NAVAIR is focused on the affordability of our warfighting machine.”

“Energy is one of the areas where I think the use of less is more,” he said.

“Our long-term view incorporates the variable cycle advanced technology, or VCAT, engine for future tactical aircraft,” Dunaway said. “With this two-mode engine, we may enjoy 20-25 percent reduction in fuel burn, but it’s not something we’re going to produce tomorrow.”

NAVAIR is partnering with the Office of Naval Research (ONR), DoN’s Task Force Energy and the Naval Aviation Enterprise (NAE) to identify and mature variable/adaptive cycle turbine engine technologies for future carrier-based tactical aircraft and intelligence, surveillance and reconnaissance platforms, according to an ONR release.

Similar to changing gears in a car, changing an aircraft engine’s bypass ratio allows the engine to be optimized for high thrust when needed for takeoff, while maintaining the efficiency of a high bypass engine in cruise conditions. Commercial airlines currently use high bypass engines.

In the mid-term, NAVAIR is taking a more conventional approach to engine fuel efficiency with the Oct. 19 award of a $82 million contract to Pratt & Whitney to show an estimated 5 percent reduction in fuel burn in an F135 demonstration engine. The F135 is the engine in the F-35 Lightning II aircraft.

“The F-35 is going to be around for a long time, and everything we can get out of that engine is going to help us,” Dunaway said.

Additionally, NAVAIR is collaborating with the fleet and NAE on an Aircraft Energy Conservation Program that will identify, validate and create incentives for energy conservation practices within the naval aviation community. The goal is to reduce naval aviation operational fuel consumption by 4 percent by 2020 without impacting the mission.

“If we get these efficiencies in these airplanes, we’re going to have to change the way we think as operators and use [energy efficiency] as a tool when we plan our missions,” Dunaway said.

In the short-term, Dunaway noted NAVAIR’s use of more simulator training for P-8A pilots and the Marine’s K-MAX unmanned cargo helicopter that reduces the number of convoys, associated fuel consumption and risk needed to resupply forward operating bases.

“What it comes down to is you’ve got to have the policies and the technology in place, and you’re going to have to change the culture of the people conducting our business,” Dunaway said.” Otherwise, you’re not going to enjoy the benefits of the technology.”