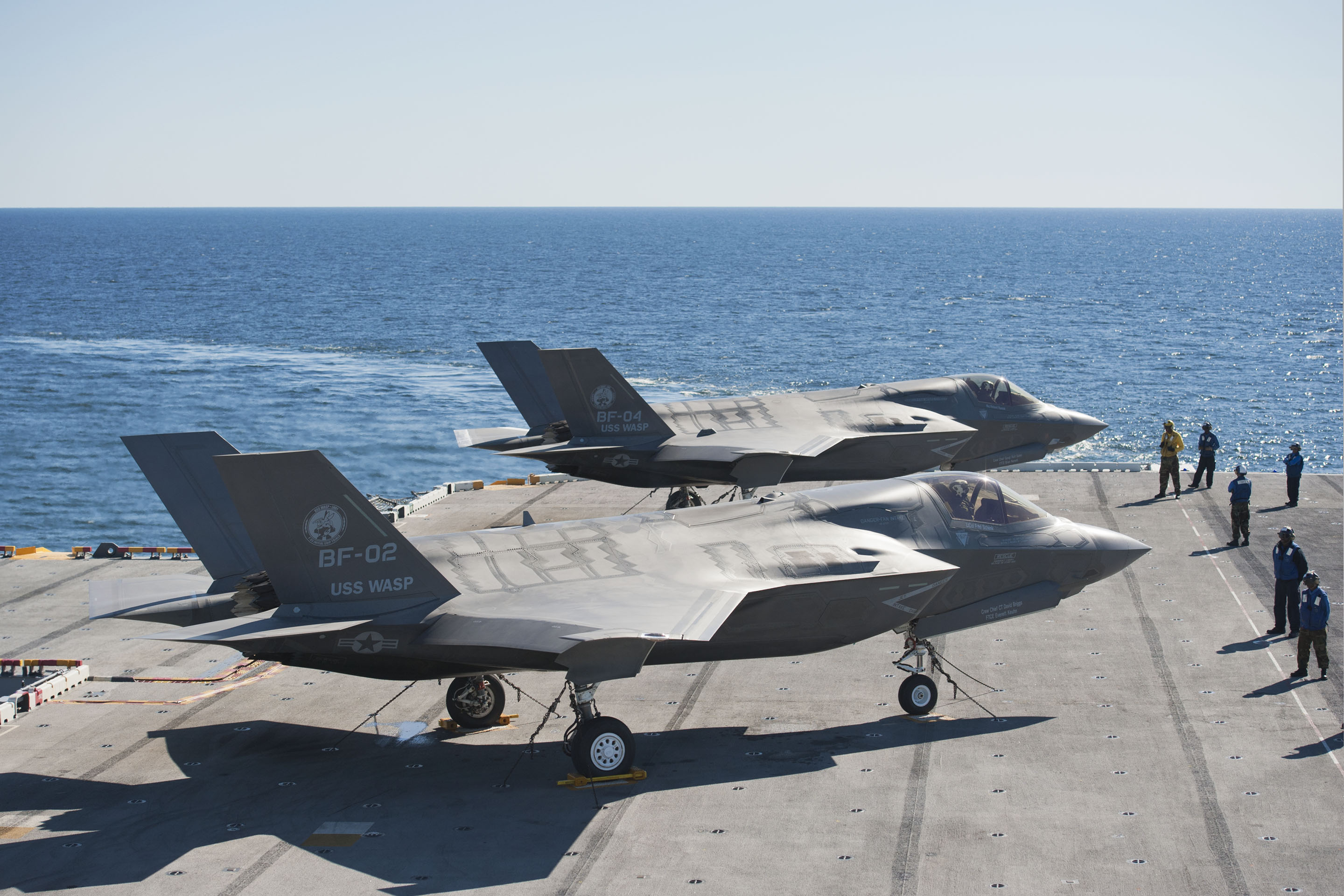 Wasp crew members worked around the clock with pilots, engineers, mechanics and a wide array of aeronautical professionals, both military and civilian, to meet the mission of the F-35B sea trials.

“Wasp Air Department personnel and the JSF team started working together from day one,” said Lt. Cmdr. Michael Curcio, Wasp’s assistant air officer and JSF program officer. “Starting initially with the leadership interacting to set the vision for the ship trials, we worked a top-down approach to gradually bring in more people from each respective team.”

“This ensured that, from planning to execution, every detail was tended to and no stone was left unturned. Ultimately, this group was well ahead of the power curve at every juncture,” he said.

The Wasp and the JSF team have been preparing for these sea trials for more than a year. The ship, which typically accommodates the AV-8B Harrier, had to receive modifications and installation of test monitoring equipment in preparation for the F-35B’s arrival.

"We used Harrier operations as a baseline from which to deviate. Working with the JSF team, we identified the operational differences between the AV-8B and the F-35B and we trained to those differences,” said Curcio.

The trials are the first of three scheduled sea-based developmental test events for the STOVL variant periods. One of the goals was to collect environmental data on the deck using instrumentation to measure the F-35B’s sound, power and thermal impact during flight operations.

Ansis Kalnajs, better known as “AK,” a topside design and integration technical warrant for Naval Sea Systems Command (NAVSEA), and his team of 31 engineers collected data to capture the effects of the F-35 on flight deck and superstructure components.

“We have been collecting data on how the main engine effects deck edge equipment,” said Kalnajs. “As well as thermal load stresses to the structure and the acoustic effects.”

“We got a sufficient amount of data and real good assessments for the road ahead,” he said.

Also being tested is a newer non-skid deck surface, Thermion, which is supported by a mechanical bond of ceramic and aluminum that makes the surface more resistant to extreme heat and better endures the wear and tear of flight operations. The Thermion covers landing spot nine on the flight deck, a small area used for vertical landings.

“The Thermion shows no signs of heat stress, which is good for the F-35, and eventually good for all surface ships,” said Kalnajs.

During the testing period the WASP and JSF team demonstrated the F-35B’s at-sea capabilities for the Secretary of the Navy, the Honorable Ray Mabus; Commandant of the Marine Corps, General James Amos; senior military officers; and JSF international partners as well as members of the national media.

The testing for the F-35 and its sea-based operations will continue over the next several years.

“It is imperative that we build off that basic knowledge for the next sea trials,” said Curcio.

The next sea trial, DT-2, is scheduled for 2013 after Wasp receives additional modifications for F-35B operations.

The F-35B is one of three Joint Strike Fighter variants. The ‘B’ was designed for use by the U.S. Marine Corps and is capable of short take-offs and vertical landings for use on amphibious ships or expeditionary airfields to provide air power to the Marine Air-Ground Task Force. The F-35B will replace the AV-8B Harrier, and will continue test and evaluation at Naval Air Station Patuxent River, Md., prior to delivery to the fleet.