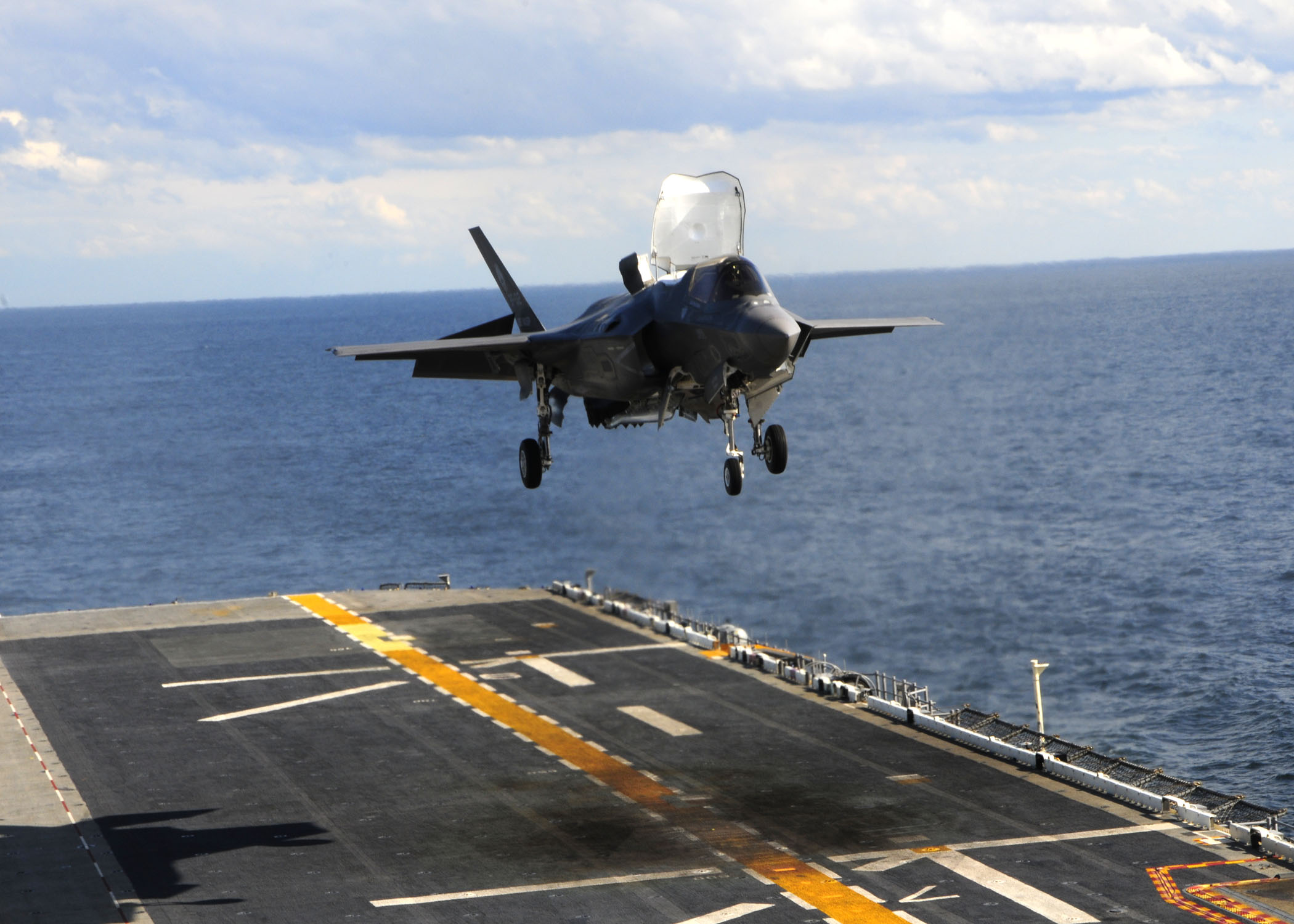 ATLANTIC OCEAN (Oct. 3, 2011) An F-35B Lightning II makes the first vertical landing on a flight deck at sea aboard the amphibious assault ship USS Wasp (LHD 1). The F-35B is the Marine Corps variant of the Joint Strike Fighter and is designed for short takeoff and vertical landing on Navy amphibious ships. (U.S. Navy photo)

Archived Body
ABOARD USS WASP, At sea – The Navy and Marine Corps team made more remarkable naval aviation history today as the F-35B Joint Strike Fighter (JSF) test aircraft BF-2 landed safely on USS Wasp’s (LHD 1) flight deck, the first at-sea vertical landing for the Marine Corps’ F-35 JSF version. Marine Corps test pilot Lt. Col. Fred Schenk landed BF-2 at 3:12 p.m. “It was exactly like we predicted,” said Schenk. “But that’s because of all the hard work and extensive preparation done by the Wasp and JSF team.” The first vertical landing is part of the initial ship trials for the F-35B, which started Monday and is expected to last two weeks. The tests are scheduled to collect data on the aircraft’s ability to perform short take-offs and vertical landings on a ship at sea, as well as determine how the aircraft integrates with the ship’s landing systems, and deck and hangar operations. This test period, the first of three scheduled at-sea test periods over the course of the development program, will also collect environmental data on the deck through added instrumentation to measure the F-35B’s impact to flight deck operations. “The first at-sea vertical landing is a huge milestone,” said Marine Corps Col. Roger Cordell, military site director for F-35 test and evaluation at Naval Air Station Patuxent River, Md. “We’re still early in this test period, and we expect to learn a lot more, but this is a great step toward delivering the capability to the fleet.” Wasp spent time in a shipyard earlier this year, preparing for the F-35 test period; adding specialized instrumentation to measure deck environmental effects. “It is no small feat to put together sea trials,” said Vice Adm. David Venlet, F-35 program executive officer. “This test was planned to happen on 3 October back in early spring of this year and the team delivered on schedule. Signs of dependable performance are emerging across broad aspects of the development program. Professionals from the Navy, Marine Corps and industry team of Lockheed Martin, Northrop Grumman, BAE Systems and Pratt and Whitney and Rolls Royce continue to work tirelessly to deliver this aircraft to the fleet.” “Every time an aircraft is first tested at sea, we learn a great deal and the data collected from this event will inform us about the further development work necessary to successfully integrate the F-35B on large-deck amphibious ships. By all accounts, we’re off to a great start today,” Venlet said. The F-35B is the variant of the Joint Strike Fighter for the U.S. Marine Corps, capable of short take-offs and vertical landings for use on amphibious ships or expeditionary airfields to provide air power to the Marine Air-Ground Task Force. The F-35B will replace Marine AV-8B Harriers and F-18 Hornets and is undergoing test and evaluation at NAS Patuxent River prior to delivery to the fleet. In addition to being the first ship to successfully land the F-35B, USS Wasp was also the first ship to host the V-22 Osprey during shipboard trials in October 2007. Summary information regarding the performance of the F-35B ship trials will be made available after the completion of the test period. Additional information about the Joint Strike Fighter Program can be found at www.jsf.mil. 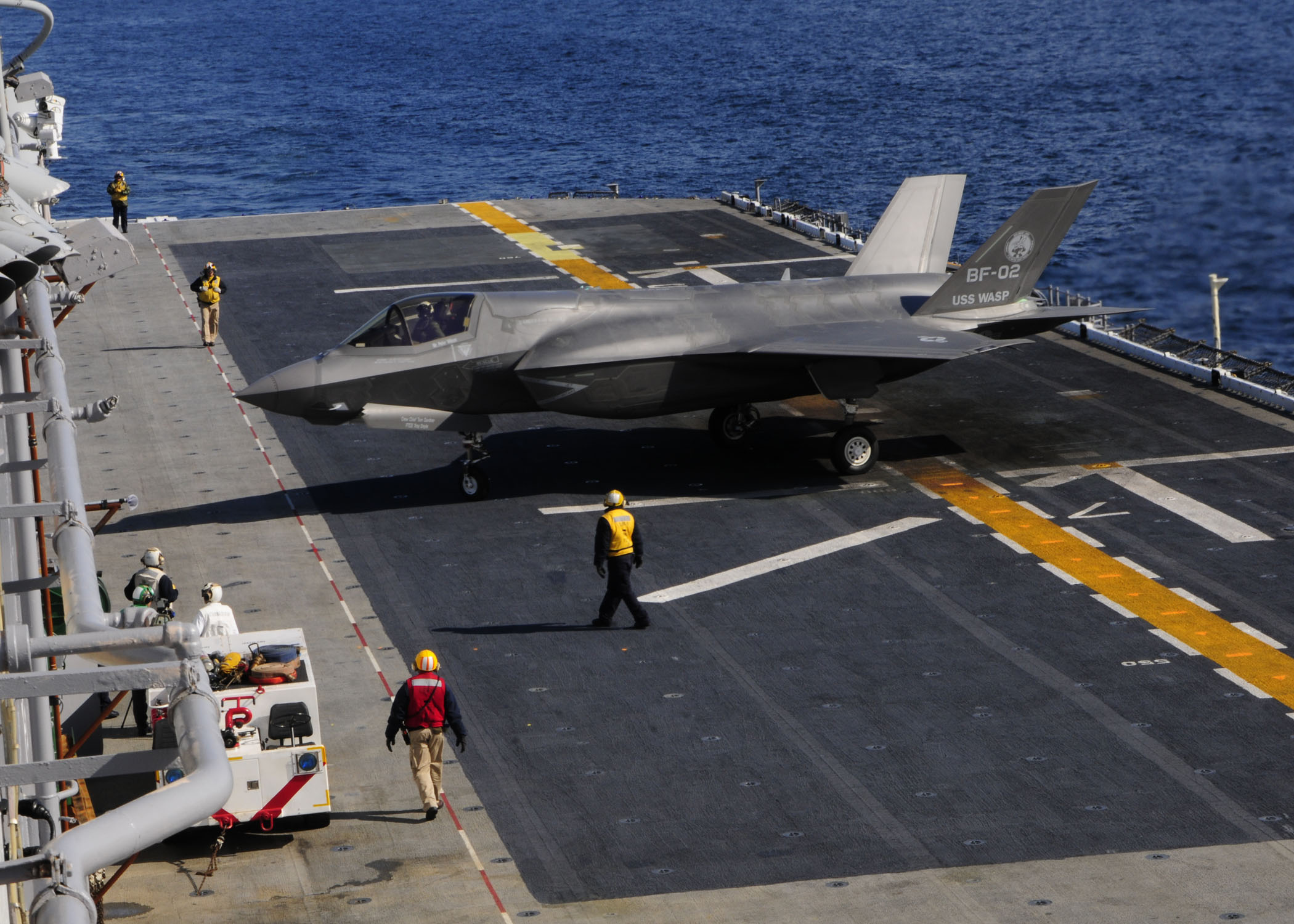