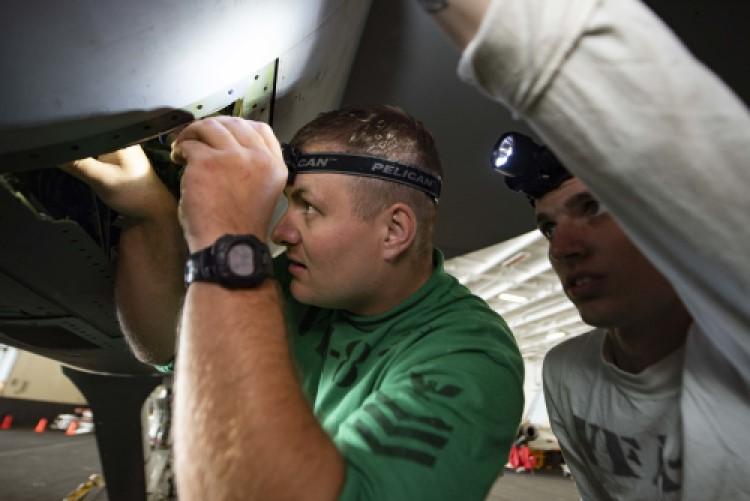 The F/A-18 and EA-18G Program Office (PMA-265) Power and Propulsion Integrated Product Team (IPT) has led the reversal of a more than a decade-long shortfall of Generator Control Units (GCUs) for its F/A-18 Super Hornet and EA-18G Growler aircraft, ultimately allowing PMA-265 to exceed the 80 percent mission-capable readiness goal set in October 2018 by then-Secretary of Defense James Mattis.

The team accomplished this goal in part by working with supplier General Electric (GE) Aviation Systems to ramp up production and restructure the GCU delivery schedule among four contracts as well as tackling some reliability issues, said Lt. Cmdr. Jason P. Shaw, the PMA-265 Power and Propulsion co-IPT lead.

Shaw said an issue with GCU production was first identified during a Reliability Control Board (RCB) in January 2019. At the time, there were 86 Issue-Priority Group 1 (IPG1) aircraft — jets prohibited from flying due to maintenance issues surrounding the GCU. There were also nearly 200 GCU back orders.

“This coupled with a very low on wing reliability caused the GCU to become the top platform degrader for all naval aviation,” Shaw said.

At the time when the 80 percent mission-capability edict was announced, the Super Hornets had only been able to maintain readiness levels of 260 mission-capable aircraft — far short of the 341 goal.

The RCB revealed that GE was producing approximately six GCUs per month that were distributed among PMA-265, Boeing and Naval Supply Systems Command (NAVSUP). PMA-265 and Boeing had cadenced delivery schedules, but NAVSUP would only receive GCUs that were produced beyond what the other two contracts needed. If GE did not produce extras GCUs, NAVSUP would not receive a delivery.

“It created a hole on the supply shelf,” Shaw said. “When a jet would lose a GCU, there was no other one to replace it from supply.”

Shaw said the team brainstormed and worked together to create the solution: GE would ramp up GCU production to a goal of 21 per month; a NAVAIR contract for 320 GCU conversion kits used to reconfigure older GCU models to the current G4 variant and 547 new G4s would delay to 2021. That contract shift would leave room in the schedule to enable NAVSUP to get a GCU contract with a cadenced delivery schedule. The move eliminated IPG1 aircraft by August 2019 and brought GCU back orders to zero as of mid-June 2020.

In addition to the production reset, the team also tackled GCU reliability issues by increasing the number of conversions of the G3 GCU, an older GCU model, Shaw said. Currently, the G2 and G3 GCU models can handle approximately 150 flight hours, and the G4 model can handle 1,220 flight hours. With a G3-to-G4 conversion kit, the GCU can reach up to 532 flight hours – a significant bump in reliability.

The result of all of this has been that PMA-265 met Mattis’ readiness goal and is regularly flying upward of 350 jets.

“The U.S. Navy is the only DOD military branch to have met and sustained the 80 percent readiness call that Mattis put out, and that is largely associated with resolving the issues with GCUs,” Shaw said.

Shaw said his team is now focused on sustainment and is looking into some wiring issues that may have contributed to low GCU reliability. A $17 million contract is in place to purchase additional software and cables for the Automated Wiring Test Sets (AWTS), which will allow aircraft mechanics to identify system faults they otherwise wouldn’t be able to see.

The team is also working with GE to resolve some further production issues related to their GCU testing capacity. Work is being done to purchase a new, larger test stand and upgrade software on existing test stands, allowing GE to conduct more tests and increase production as a result.

“In less than a year, Super Hornet mission-capable aircraft increased from 260 to 350 while reducing GCU IPG1s and back orders to zero – that’s about the most direct tie to readiness that I’ve seen,” she said. “I couldn’t be prouder of this team and the hard work of everyone on it.”