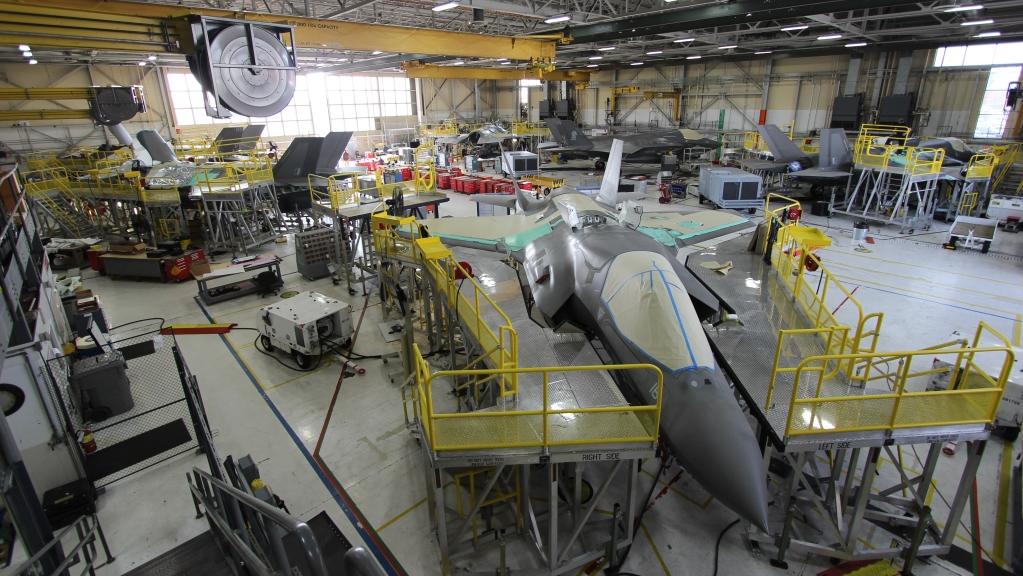 Fleet Readiness Center East is the lead site for depot-level maintenance on the F-35B (short takeoff-vertical landing). A recently constructed laser shock peening facility will bring a new strategic capability to Fleet Readiness Center East and the F-35B Lightning aircraft line next year. When the new F-35 laser shock peening facility is fully operational in 2020, FRCE will be one of two sites in the world that will use laser technology to strengthen F-35 structural components. (FRCE file photo)

A recently-completed facility will bring a new strategic capability to Fleet Readiness Center East and the F-35B Lightning aircraft line next year. When the new F-35 laser shock peening facility is fully operational in 2020, FRCE will be one of two sites in the world that will use laser technology to strengthen F-35 structural components.

“This facility is a big get for Fleet Readiness Center East,” Jeter said. “It’s very exciting. Being able to perform this laser shock peening process adds a huge strategic capability to our depot. With it, we’ll be able to provide a critical support element to the F-35B program and act as a force multiplier for the fleet and the warfighter.”

The 16,000-square-foot facility comprises two bays, where the actual laser shock peening process will take place, and a connected area that will house the laser generator. The state-of-the-art laser shock peening process will allow FRCE to conduct heavy structure modifications that will strengthen areas of the F-35’s airframe without disassembling the entire aircraft, said Matthew Crisp, the F-35 Joint Program Office site lead at FRCE.

The process strengthens designs without adding additional metal or weight, which increases the aircraft’s life and reduces maintenance costs. It has been used on the F-22 Raptor and in manufacturing aircraft components including engine blades, Crisp said, but has never been employed for the F-35. Now, FRCE will use the technology to help Marine Corps aircraft reach their full life limit.

Aircraft maintenance professionals at FRCE will conduct prep work and some structural modification on the F-35s inducted into the depot, then turn them over to the contractor running the laser shock peening operations. The contractor will complete the process to strengthen the bulkheads and airframes, and FRCE will put the jets back together, perform all the flight test functions and get them back out to the fleet, Jeter said. The end result is aircraft that have been reinforced without adding additional weight, which would reduce the fighter’s capabilities by limiting its fuel or weapons carrying capacity.

Shot peening is not a new process, Crisp said, but laser shock peening is unique in that it produces a uniform result across the surface being treated. In laser shock peening, the surface of the media is first coated with an ablative layer and covered with a water tamping layer. A high-energy laser beam is fired at the metal, which creates an area of plasma on the metal’s surface. The impact creates a shock wave, which travels through the metal, and compressive residual stresses remain. This compression helps improve the metal’s damage tolerance, fatigue life and strength.

“(Shot peening) has been done for decades,” he explained. “It’s where you take a solid media, like glass beads or some kind of metal, and you hit the surface of an item – kind of like sandblasting. You just randomly throw it at the surface, and it creates all these surface dimples. What you get is a very inconsistent surface profile, because it’s not controlled.”

“They create a laser beam that’s actually square, and the intensity is consistent across the entire laser beam – it’s the exact same at the very edge of the beam as it is in the middle,” he said. “They come up with a grid pattern and stack the squares up right beside each other, so the entire surface of the part is completely uniform. You don’t have the weak spots in between these areas that would then induce cracking later.”

Jeter said he expects laser shock peening to be a main focus of the F-35 line for the next four to five years. Once the first two aircraft have undergone the validation and verification process, it will be a sprint to the finish to complete modifications on the remainder of the F-35B fleet that requires this treatment.

“After that val/ver event, the aircraft will basically be nose-to-tail,” Crisp added. “We’ll completely fill every aircraft stall that’s here, and for the next five years, when one leaves another will come in. That’s critical, because this process has to be done on every single airplane that requires it.”

The workload does not include every F-35 ever produced, although it does include B and C models, and also encompasses F-35 aircraft owned by partner nations. FRCE will focus solely on the B variant, while Hill Air Force Base in Ogden, Utah, will work on the F-35C models and take any F-35B overflow.

After the first round of laser shock peening modifications, what comes after that is still to be determined, Crisp said.

“I’m sure there will be some follow-on work,” he said. “And beyond the F-35 program, this is a little bit exciting, because this really is cutting-edge technology and we have it here at FRCE. I think maybe within the engineering community here, as people find out more about it, they may open additional discussions about how we could implement this on other aircraft lines. We might find a future capability we want to look at.”