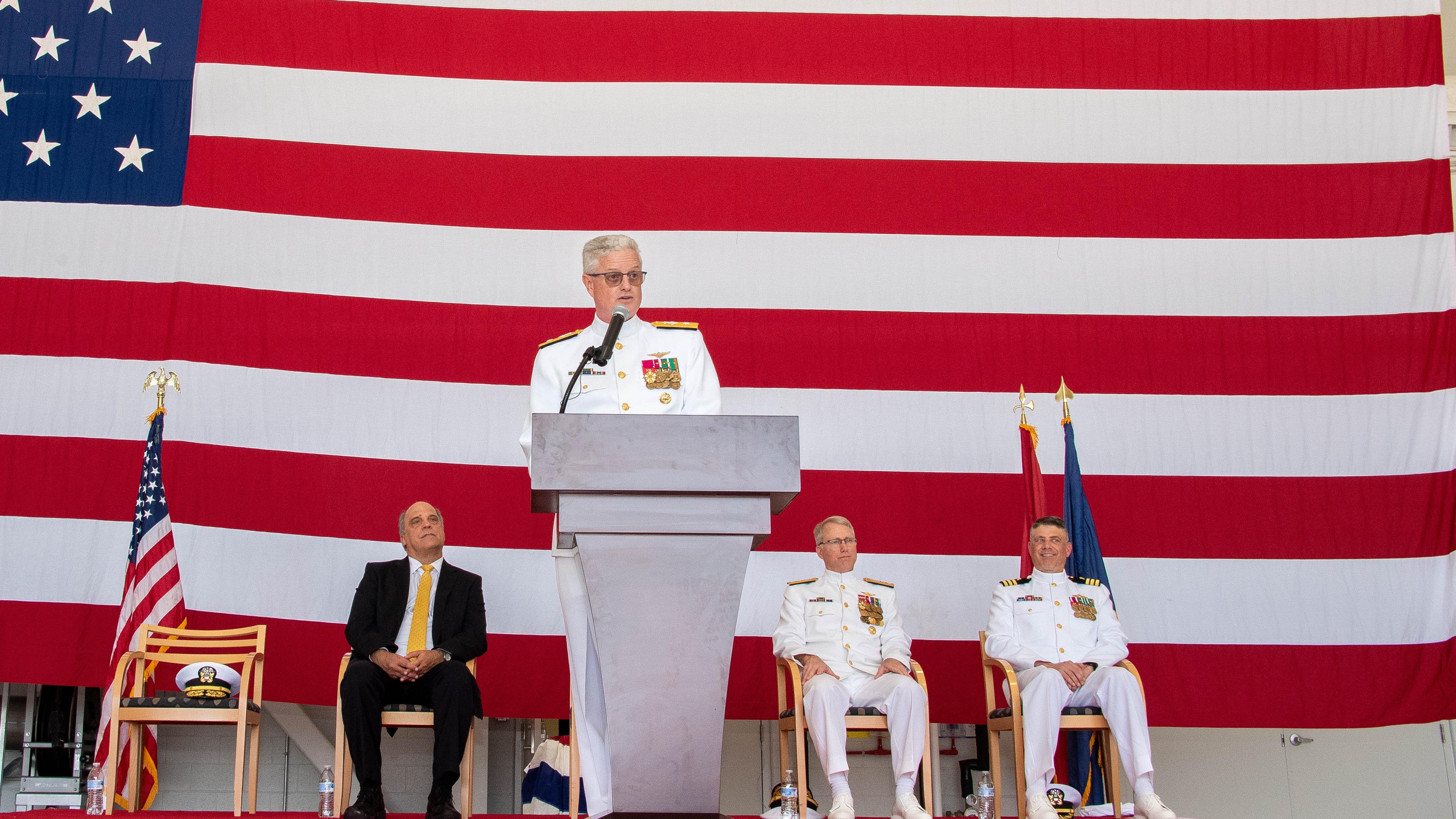 Rear Adm. Brian Corey bid farewell to the Program Executive Office for Unmanned Aviation and Strike Weapons (PEO (U&W)) May 19 as he ended his 36-year military career during a change of command and retirement ceremony that focused on leadership and teamwork.

Corey welcomed Rear Adm. Stephen Tedford, his successor at PEO (U&W), which is headquartered at Patuxent River and responsible for the development, production, fielding and sustainment of the Navy’s unmanned aircraft, weapons and target systems.

“What an incredible ride it has been being part of naval aviation for more than three decades,” Corey said.

Reflecting on his years of service, from his training at Pensacola, to flying with the “Blue Diamonds,” his tour in Japan, and as commander at Naval Air System Warfare Division, Corey recognized the hundreds of professionals he served with over the years and thanked them for helping shape his career.

When speaking on the last four years serving PEO (U&W), Corey said it was the partnerships both with fellow services and international allies that made the program successful. It was the teamwork he had always imagined, but not seen before.

As PEO (U&W), Corey led a team of nearly 4,000 military, civilian and contractor personnel. He oversaw the MQ-4C Triton’s first deployment and the first ever aerial refueling flight of the MQ-25 Stingray. His team also delivered the first new Tomahawk variant in fifteen years to the fleet.

Jay Stefany, principle civilian deputy for the Navy’s Research, Development and Acquisition, served as the guest speaker for the ceremony. He welcomed Tedford and recognized him for his prior accomplishments and then remarked on Corey’s action-oriented leadership style.

“It takes a leader to know his people, his business, and understand how to meld it into successful execution of the mission,” he said. “A leader who plots the course, establishes goals, enforces the standards, builds and mentors his team, and lets them run—this is the kind of leader PEO (U&W) has had for the past three years.”

Leaving a strong legacy behind, Corey read his official orders and turned the ceremony over to Tedford who thanked Corey for his mentorship, guidance and friendship throughout the years.

“Your passion, zeal and leadership of this team is impressive and greatly appreciated,” Tedford said. “The future successes of this team are greatly dependent on the solid foundation you have built over the years.”

Tedford looked to the U&W team and remarked on the value of the work they do.

“The leadership of the Navy and the Sailors and Marines on the front line believe in you,” he said. “Together we will commit each day to live up to their expectations, deliver capabities they can depend on and work tirelessly to bring them home safely.”

A New York native and Penn State graduate, Tedford most recently served as Commander, Operational Test and Evaluation Force in Norfolk, Virginia. He has vast acquisition experience including two tours in the Maritime Patrol and Reconnaissance Aircraft (PMA-290) program office and served as a program manager for Aircraft Launch and Recovery Equipment (PMA-251). He also served as NAVAIR’s vice commander from 2018-2019.

He has flown more than 3,100 flight hours in 40 different aircraft.