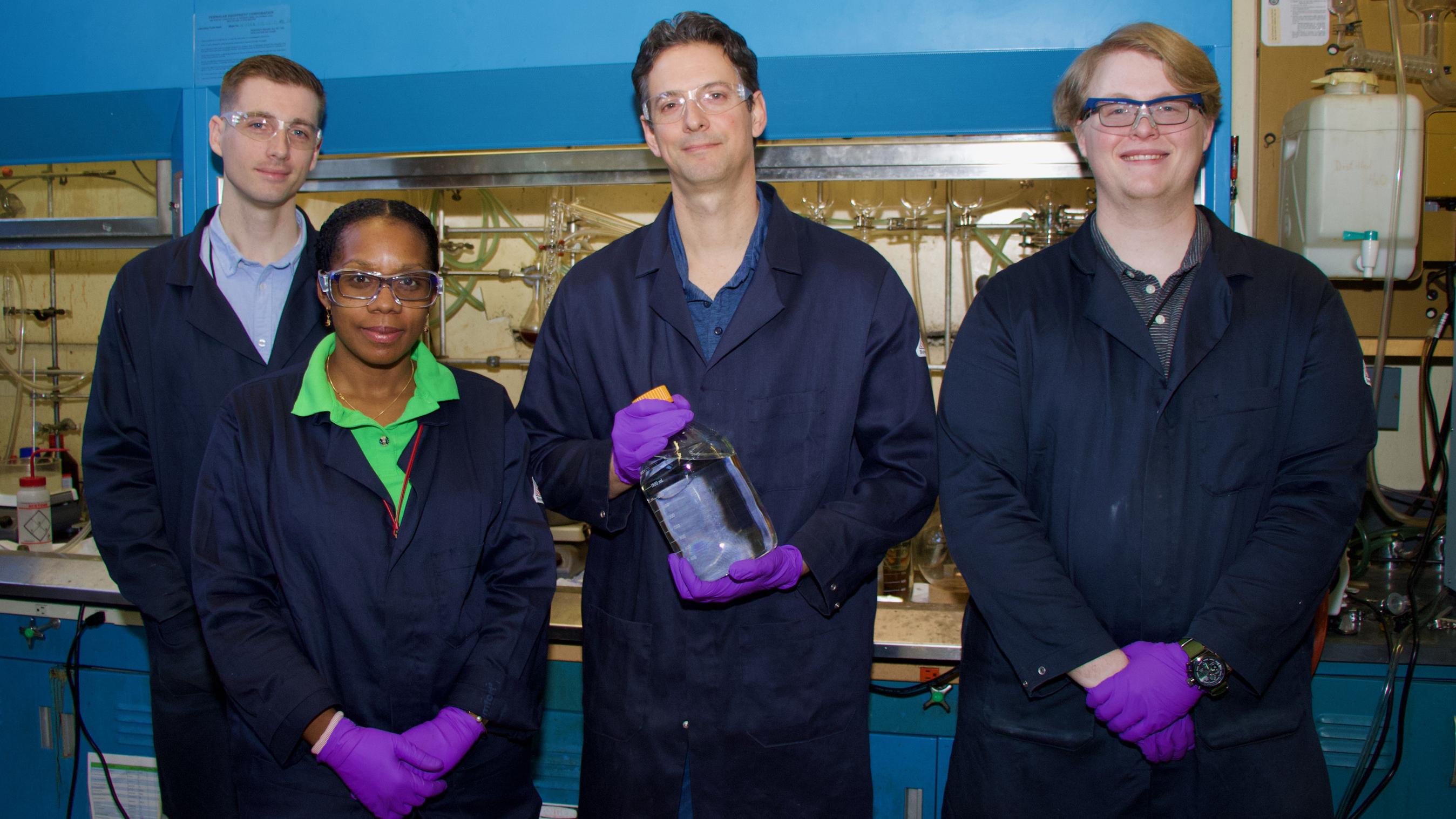 Dr. Ben Harvey and a group of chemists from Naval Air Warfare Center Weapons Division, pictured here in 2019, are working with government and industry partners to study the development of biosynthetic fuels.(U.S. Navy photo by Paul Kakert)

What do bread and liquid jet fuel have in common?

At least they can, if you’re talking about the biosynthetic research being done in China Lake, California, by Naval Air Warfare Center Weapons Division and Amyris, Inc., a biotechnology company headquartered in Emeryville. Funded by the Defense Advanced Research Projects Agency’s Living Foundries: 1000 Molecules Program, NAWCWD and Amyris’ project starts with specially developed yeast cells and ends with a high-density missile fuel.

But between yeast and biosynthetic fuel, there’s a lot of science, and a lot of work.

First, let’s start with synthetic biology. Synthetic biology is a field of science that involves engineering organisms so they can reliably produce a specific, naturally occurring substance, such as a medicine, sweetener, or complex mixture of hydrocarbons. In Amyris’ case, they genetically modify yeast cells that can ferment sugar into molecules that can be difficult to reliably, sustainably or affordably obtain.

“Think about the rose oil we use in fragrances,” said Dr. Patrick Rose, science director for synthetic biology for the Office of Naval Research Global. “Right now, you’d have to seed a field of roses, let them bloom, harvest the petals, then process and purify the product.”

That’s time consuming and labor-intensive for an impure and unreliable outcome. Modified bacteria can produce a purer sample of the same compound through fermentation, like brewing beer at home. Just add sugar, water and time. And it’s not just rose oil; a wide range of biological molecules can be produced in this manner.

But what molecules would DoD need? That’s where partnerships between government, industry and academia become important.

“Over the course of the Living Foundries program, DARPA often played ‘matchmaker’ to connect Amyris … with scientists in the Army, Air Force, and Navy,” said Dr. Adam Meadows, principal scientist in Amyris’ Process Development and Manufacturing Department. “Dr. Benjamin Harvey [NAWCWD’s senior research chemist] was able to provide guidance on which classes of biomolecules were most interesting in the fuels and material space.”

Conventional hydrocarbon fuels are produced by distillation of crude oil. This process generates a variety of products including gasoline, diesel, and jet fuel. However, these distillates include sulfur-containing and aromatic compounds that can lead to acid rain, engine corrosion, and particulate formation. This leads to lower performance and increased maintenance costs for the Navy.

Then there are synthetic fuels, which are produced by combining specific petrochemical molecules to generate fuel mixtures. Fuels of this type are typically expensive and methods to generate them can be carbon inefficient and energy intensive.

“Synthetic missile fuels are expensive and biosynthetic surrogates offer an opportunity to decrease costs,” Harvey said. “The use of biosynthetic fuels in jet and diesel engines can also increase the range and fuel economy of aircraft, ground vehicles and ships, while reducing the emission of toxic particulates and resulting in lower net greenhouse gas emissions.”

More familiar are biofuels like ethanol made through a fermentation process, or biodiesel, which comes from processing vegetable oils. Neither has the energy density, purity, or stability of a biosynthetic fuel.

Through the Living Foundries program, Harvey’s team at NAWCWD developed a process to convert a complex mixture of biosynthetic hydrocarbons (produced by Amyris) to a high-density missile fuel. This fuel was recently ground-tested in a liquid fuel ramjet test stand, representing a first-of-its-kind demonstration.

“No one has ever produced a biosynthetic fuel with comparable energy density to the synthetic missile fuel JP-10, and tested it in both a turbine engine and a system that mimics conditions found in a liquid fuel ramjet engine,” Harvey said.

BioRenewable-1, the fuel Harvey’s team produced, has up to 19% higher volumetric energy density than conventional jet fuel. That’s comparable to JP-10, a synthetic fuel currently used to power cruise missiles around the world.

“BR-1 has an energy density high enough for use in high performance military systems,” said Dr. Anne Cheever, program manager for DARPA’s Living Foundries program. “Biologically produced fuels can have advantages in cost and performance over comparable synthetically produced fuels and could be an additional source of military-grade fuels during times of higher demand.”

Regardless of the fuel source, the cost of logistics must be accounted for. Moving the tons of fuel needed to keep the fleet afloat and the boots on the march is expensive and can be a vulnerable link in the supply chain. Rose noted that moving yeast and sugar as fuel precursors would be more cost-effective and could possibly be less vulnerable due to their lower dollar value and relative ease of acquisition.

“The COVID-19 pandemic, while demonstrating the nation’s vulnerabilities to biothreats, has also shown the fragility of the supply chain,” said Dr. Michelle Rozo, principal director for biotechnology, Office of the Undersecretary of Defense for Research and Engineering. “The United States relies on foreign suppliers for a number of critical components including petrochemicals, rare earth minerals, and active pharmaceutical ingredients. Biomanufacturing of synthetic fuels will provide supply chain resiliency for the Department.”

Finding opportunities to strengthen that resiliency – and advancing the science of biotechnology – requires collaboration across government, industry, and academia, Harvey said, noting that “cross-disciplinary interactions enable us to creatively solve recalcitrant problems.”

“Working with industry and academia allows us to build teams with an array of expertise,” he added. “This force multiplying strategy enables DARPA and NAWCWD to greatly accelerate the pace of research while reducing costs. The Navy is not in the business of fuel production. Instead, we seek to transition our technology to commercial partners so they can produce these materials to support the warfighter.”

Even more importantly, the DoD must use those collaborations to rapidly grow its depth and breadth in the field of biosynthetics.

“DoD must be a leader in biotechnology,” Rozo said, “not just because it will provide distinctive technical capabilities to the Department, but also because a mastery of these technologies provides situational awareness and defense against misuse.”