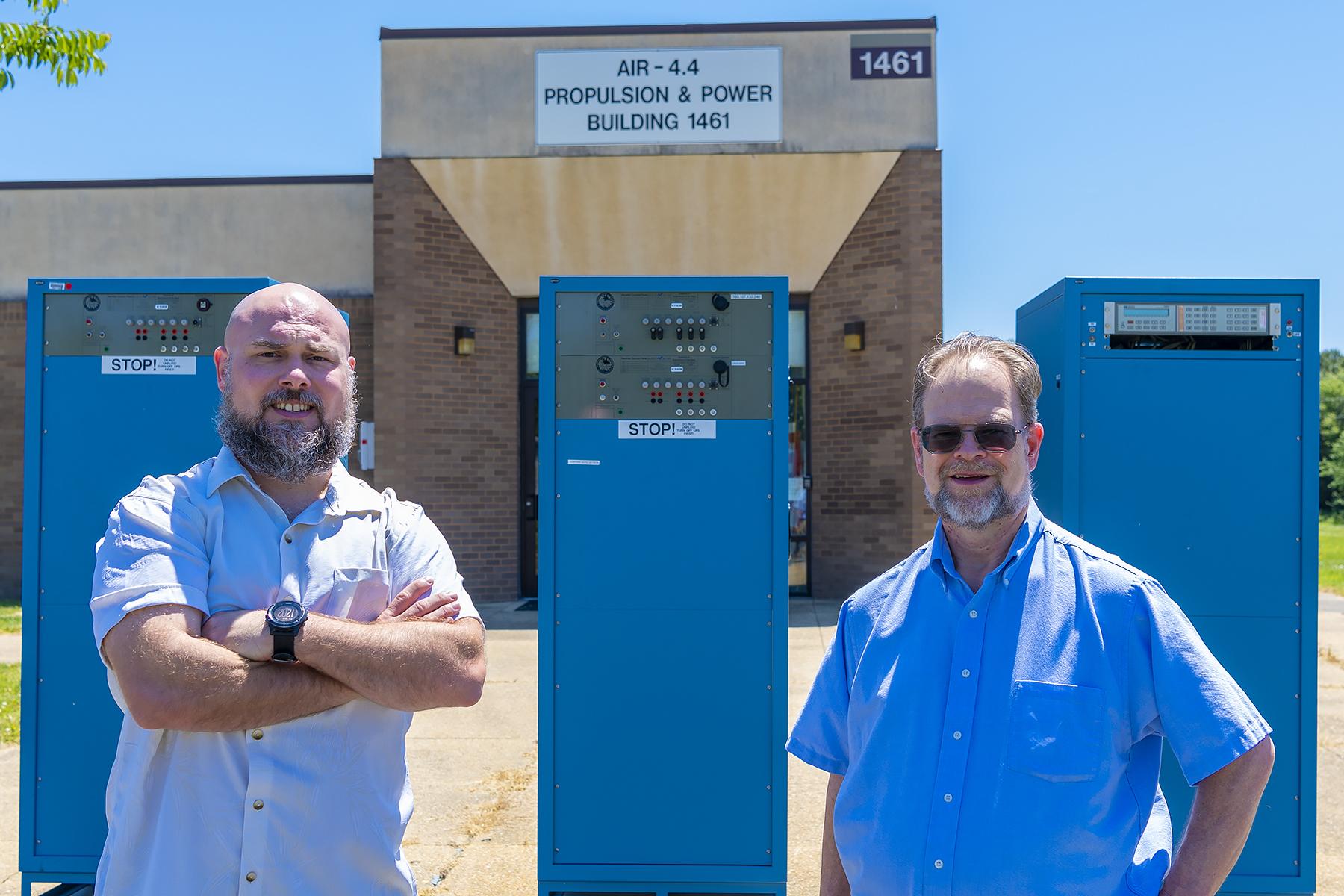 Senior Electrical Engineer Joshua Masters, left, and F-18 Electrical Subsystem Integrated Product Team  Lead Charles Singer stand in front of the computer-programmable power testing system they and other NAWCAD engineers invented to reduce the time required to test the avionics systems of the Navy's F/A-18 Hornets. The team, which received a patent for their invention, was recently recognized for their accomplishments in a virtual ceremony along with other patent awardees.

Thanks to a recently patented invention from Naval Air Warfare Center Aircraft Division (NAWCAD), maintainers will soon be able to reduce the time required to test the avionics systems of the Navy's F/A-18 Hornets — increasing the operational readiness of the fleet's primary strike aircraft.

The Programmable Silicon Controlled Rectifier Firing System, invented by a group of electrical engineers working on the F/A-18 Integrated Product Team (IPT) in the F/A-18 and EA-18G Program Office (PMA-265), cures a major aircraft maintenance headache: how to reduce the time and effort required to ensure that an aircraft's avionics — that is, its electrical and electromechanical systems — are operating correctly. Simply put, as avionics systems have grown in complexity and power, the devices used to test them have not been able to keep up. And that translates into more down-time for aircraft.

"The way avionics consume power has significantly changed compared to 20 or 30 years ago," said Senior Electrical Engineer Joshua Masters, one of the system's inventors. "We needed a system that could safely replicate what modern avionics systems do during flight on the ground."

To solve the problem, the F/A-18 IPT engineers invented a computer-programmable power testing system that more accurately mimics the power demands and patterns of an aircraft's radars, radios, weapons, and other electrical devices. This means the devices themselves don't have to be run as part of the tests, which saves wear and tear. And because the electrical tests can now be run on the ground, the time and risks involved in test flights can also be significantly reduced. Furthermore, the new firing system can be used on every series of the F/A-18 in service with the fleet.

In tests conducted so far, the engineers have been able to increase the avionics' "time on wing" — that is, the amount of time that electronic equipment spends installed in an aircraft as opposed to sitting on a test bench — by five to six times.

"It's very exciting to be able to update our requirements and have our equipment last longer for the fleet because of our invention," said F-18 Electrical Subsystem IPT Lead Charles Singer.

In April, NAWCAD Commander Rear Adm. John Lemmon and Executive Director Leslie Taylor honored Masters, Singer, and other recent patent recipients during a virtual ceremony recognizing their accomplishments and contributions in support of naval aviation and the nation's warfighters.

Singer said the patent award is a reflection of the contributions of the entire program office, not just the inventors.

"The people that we work with are very professional," Singer said. "Everyone, from technicians to managers, was willing to work with us. It's important to have the support of the people around you in order to succeed."

NAWCAD advances capability and operational readiness for naval aviation and our warfighters. The warfare center is where naval aviation takes flight through research, development, test, evaluation, and sustainment of both fielded and not-yet fielded naval platforms and technologies that ensure America’s Sailors and Marines always go into conflict with significant advantage. With sites in Patuxent River, Maryland, Lakehurst, New Jersey, and Orlando, Florida, the command is the Navy’s largest warfare center with a diverse force of military, civilians, and contractors building the Navy of today, the Navy of tomorrow, and the Navy after next.