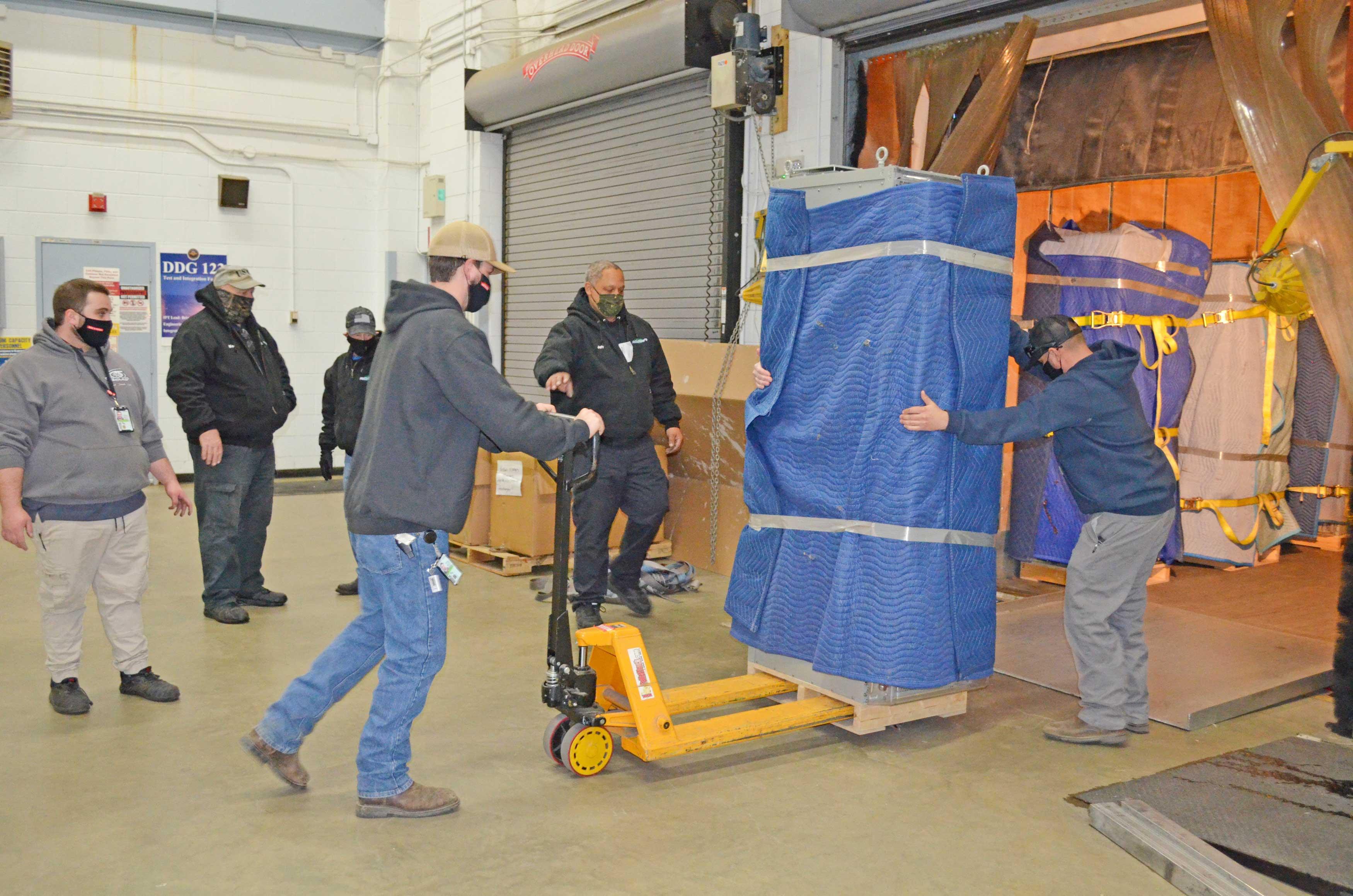 The last of more than 50 Aegis Radio Communication Suite (RCS) racks was loaded early this morning for delivery to USS Jack H. Lucas (DDG 125). Prepping and delivering the RCS happens over the course of a month, and it is transported on multiple large trucks. Since 1981, the Naval Air Warfare Center Aircraft Division's Aegis team at Webster Outlying Field has delivered approximately two systems per year, each one on time and within budget. (U.S. Navy photo by Joni Ridgell)

The RCS is integral to the operation of the Aegis combat system, and was developed and integrated by NAWCAD engineers.

“I am incredibly proud of our team for the capability they continue to deliver to our ships,” said NAWCAD Commander Rear Adm. John Lemmon.

Aegis is capable of engaging threats launched from the air, below sea, and from the surface, and consists of weapon and combat systems aboard Ticonderoga-class cruisers and Arleigh Burke-class destroyers. The RCS provides external communications capabilities, and this 100th system will be delivered to USS Jack H. Lucas (DDG 125), in Pascagoula, Mississippi.

“From the very beginning, every system has delivered to the fleet within budget and on schedule,” said NAWCAD Webster Outlying Field’s (WOLF) Executive Director Christian Utara. “This remarkable achievement is the direct result of the profound dedication of every member of the Aegis RCS team.”

The RCS footprint is large, comprised of more than 50 six-foot high racks and an antenna set. Since space on a ship is limited, the test bed at WOLF is an exact replica of a ship compartment, helping to assure accurate installation. Prepping and delivering the system happens over the course of a month, and it is transported on multiple large trucks. WOLF’s Aegis team has delivered approximately two systems per year since the 1980s.

With roots dating back to 1957 at Johns Hopkins University’s Applied Physics Laboratory, the first Aegis RCS was delivered to USS Ticonderoga (CG 47) in 1981. In 1990, WOLF delivered the first RCS to an Arleigh Burke-class warship. The 101st RCS delivery is scheduled for April 2021 to USS John Basilone (DDG 122).

Aegis ships provided continuous support for the U.S. military and commercial transport in the Persian Gulf during the Iran-Iraq War of the 1980s, and anti-air warfare to U.S. and coalition naval and amphibious forces during Operations Desert Shield and Desert Storm, thus earning the moniker “Shield of the Fleet.” This ship class continues protecting U.S. interests today.