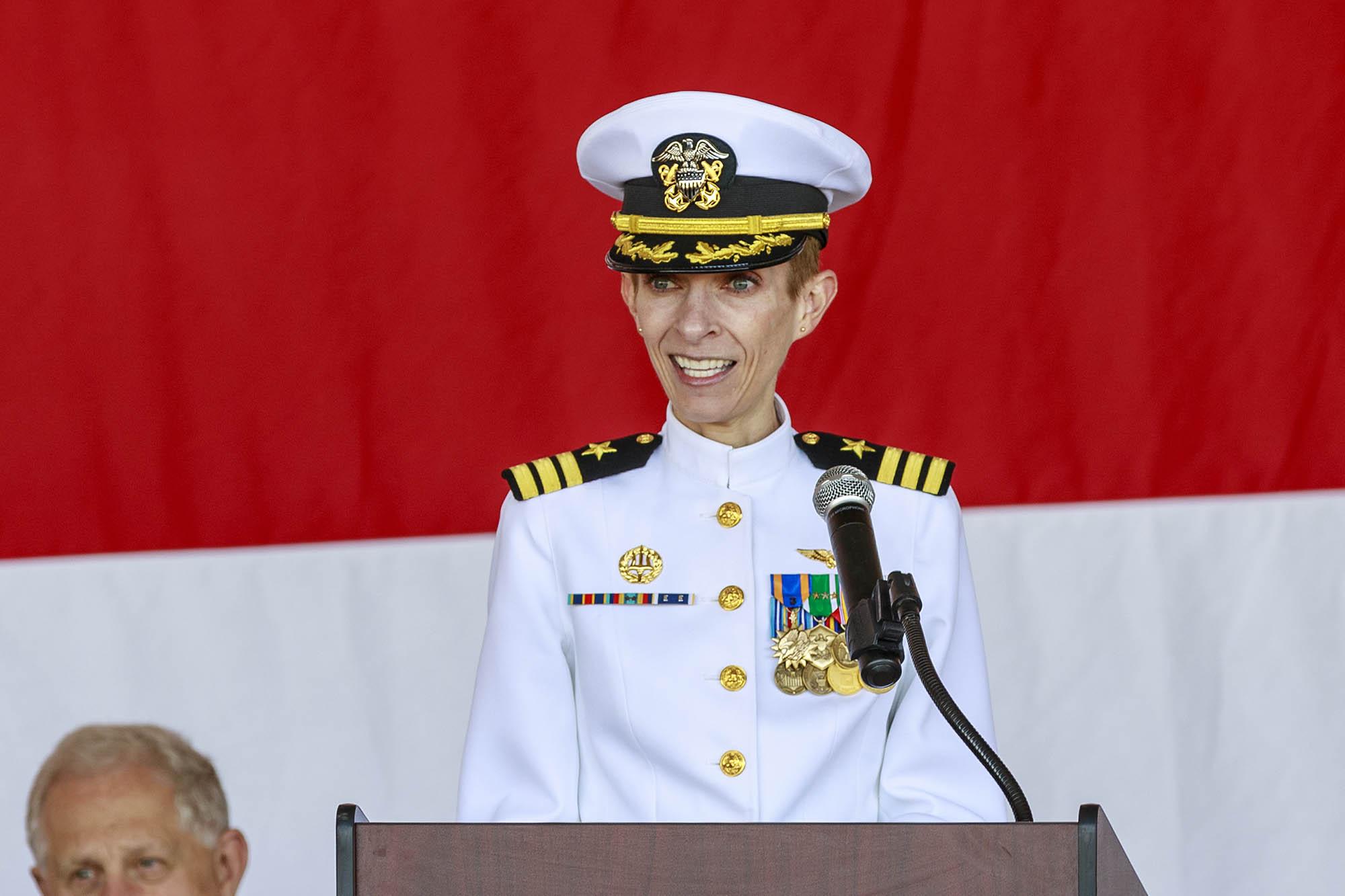 Cmdr. Colette Lazenka relieved Cmdr. Jason Saglimbene as commanding officer of the “Bloodhounds” of Air Test and Evaluation Squadron (VX) 30 during a change of command ceremony at Naval Base Ventura County, Point Mugu, California, on May 12.

The ceremony also marked Saglimbene’s last day in uniform; he is retiring from the Navy.

Garvin noted that he’d met Saglimbene when he was a lieutenant and Garvin a commander.

“It was very obvious to me from the minute that I met him and then certainly as I got to fly with and got to know him,” Garvin said. “He’s not just a fantastic pilot – that’s obvious – but he’s a great human being. He’s a fantastic leader. I knew at that point that the sky literally was the limit for Sags.”

“In naval aviation,” Garvin added, addressing Saglimbene, “we say that we fly, we fight, we lead, and we win. I think it’s fair to say that you have lived by that mantra every single day of your Navy career.”

Saglimbene thanked his family, friends, and fellow Bloodhounds for their support during his command, saying he was proud of all that the squadron accomplished during his time in command and that he was “equally proud to hand the squadron off” to Lazenka.

“I know you appreciate how special this place is,” he said, addressing Lazenka. “I know that they will continue to impress you.”

Lazenka is the 20th person to lead the Bloodhounds and the first woman to hold the position.

“VX-30 is an absolutely amazing squadron, and I am honored to be a part of the team and serve as a Bloodhound alongside all of you,” Lazenka said after formally taking command. “I am truly humbled to be your commanding officer.”

Lazenka, a native of Horsham, Pennsylvania, graduated from the United States Naval Academy in May 2002 and earned her Naval Flight Officer wings in December 2003. She has completed numerous deployments in support of Operations Enduring Freedom and Iraqi Freedom, as well as deployments to the Pacific Theater.

She led acceptance testing for the Navy’s first seven P-8A aircraft and helped transition the first four P-3C squadrons to the P-8A, after which she served in the Advanced Sensors Technology Program Office and the MQ-25 Unmanned Carrier Aviation Program Office. She joined VX-30 in November 2020 as the squadron’s chief test pilot.

Cmdr. Colette Lazenka and Cmdr. Jason Saglimbene pose for a photo after a May 12 change of command ceremony in which Lazenka relieved Saglimbene of command of Air Test and Evaluation Squadron (VX) 30 in Point Mugu, California. (U.S. Navy photo by Rob Grabendike)