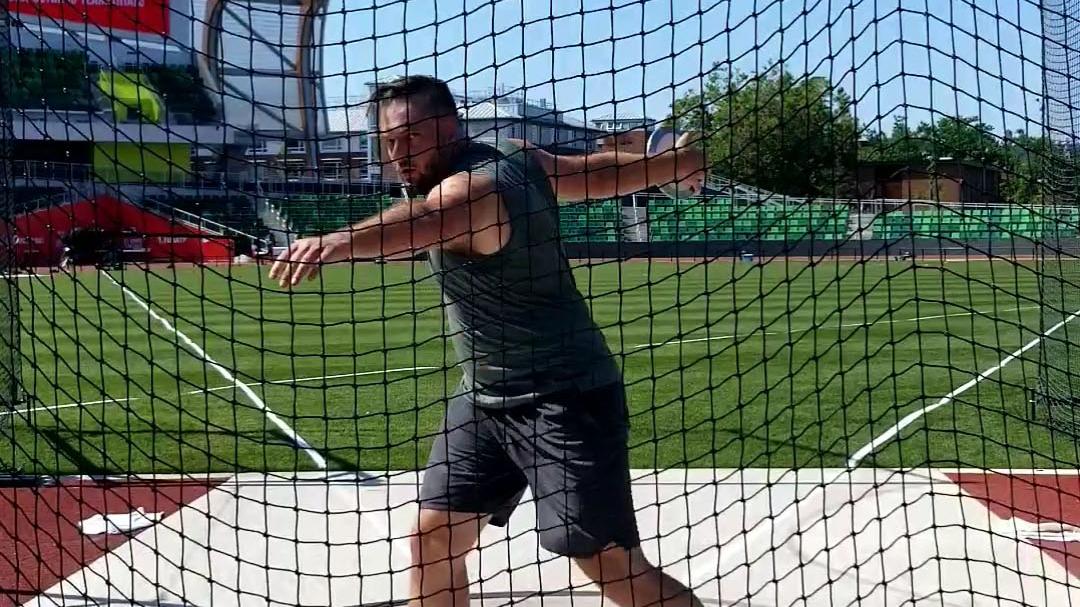 The opening ceremony of the Summer Olympics is Friday, July 23. People across the globe will tune in and watch athletes compete for the gold and think to themselves – I wonder if I could do that? Could I even come close? Would I even be able to try?

Jayson Kovar, a general engineer and warheads lead with Ordnance Assessment for Naval Air Warfare Center Weapons Division, will be watching as well. But unlike most of us, he’s reached for that Olympic ring.

Last month, Kovar, who’s been participating in discus and shot put since he was in elementary school, got the call to compete for a spot on the U.S. Track and Field team at Hayward Field at the University of Oregon.

It was a call he’d been preparing for since he was in 3rd grade, when he and his dad Jay – who was at the time a NAWCWD employee and was himself a finalist in the Olympic trial in 1984 – would travel around the U.S. every summer going to track meets and the junior Olympics. In the summer after 4th grade, Kovar made his first trip to Hayward Field for a meet.

“I think that was my favorite trip,” he said. “We drove up from Ridgecrest to compete, then drove cross-country to Iowa. We got to see Yellowstone and Mount Rushmore and throw.”

Kovar continued to throw throughout his school career, and was on the varsity track and field team at Burroughs High School in Ridgecrest, California, all four years. He still holds the shotput and discus records there.

In 2016 while a student at Southern Utah University, Kovar just missed making the cut for the Olympic trials. After he graduated in 2017, keeping up his form became a challenge.

Without a coach nearby – Jay Kovar now coaches at Jayson’s college alma mater SUU – he had to buckle down and train on his own. He records his throws and sends the video to his dad for support.

All the work paid off. In 2019, Kovar saw his personal bests and qualified for the USA Championship trials. You never forget your personal best, he said.

“It was May 3, 2019, and we were throwing down in Fullerton. I didn’t know it was going to be a good day until the competition started. The first throw was pretty good for me. But then I had four that were personal bests all in a row. I remember the feeling, and hold onto that feeling, because personal bests don’t come every day.”

Fast forward through 2020, which saw Kovar setting up a home gym to stay in throwing condition, to June 2021 when he gets the call to compete in the Olympic trials.

“I couldn’t believe it. It was unreal,” Kovar said. “It went by so fast, and I just wanted it to keep going.”

Kovar said standing in the newly renovated Hayward Field 17 years after his first visit as a 4th grader, surrounded by other athletes and all the people in the stands was both daunting and amazing. But when it comes time to throw, it’s just him and the discus.

“When I’m throwing, I don’t remember seeing anything,” he said. “I set up and then everything just goes dark.”

“Throwing is kind of brutal. You put in all this work for four years, then you get three throws to show what you’re worth.”

But that doesn’t mean you stop; there’s always a ring to chase. For Olympic hopefuls like Kovar, there’s 2024.

Naval Air Warfare Center Weapons Division employee Jayson Kovar poses for a photo at Hayward Field in Eugene, Oregon, while preparing to compete for a spot on the U.S. Olympic Track and Field Team. (Courtesy photo)